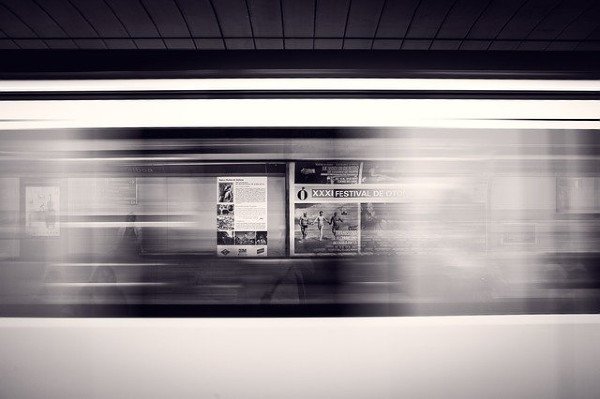 There are several reasons why one business would acquire another.

The first reason is to acquire a new piece of technology. Usually, this is something that would take them too long to build, or perhaps they don’t have the expertise.

The second reason is to acquire customers. For example, to gain a foothold in a new vertical market or geography.

The third reason is to accelerate growth. You can add the top lines together when a deal closes – and presto – you’ve grown faster.

The fourth reason is to kill the competition. Buy a competitor and fold it or starve it of resources.

The fifth reason is to sexy-up some headlines – pump yourself up in the trades with the hope of becoming an acquisition target yourself.  This also works in deal negotiation: you leak the idea that you’re up for sale as means to gain leverage in pricing the transaction.

Over the course of my career, I’ve lived through two acquisitions, contributed to internal and external comms for several more, and at different organizations, and even did a divestiture. Years later, I’d land the company that bought the divested business as a client, so it was interesting to see the outcome compared with the rationale for buying and selling at the time.

I’ve observed first-hand each of these five rationales for mergers and auditions (M&A) at play. And it’s top of mind this month because the largest PR technology vendor is back to doing acquisitions. It leads this edition of the PR Tech Sum – a monthly roundup of all the news from the PR technology market.

[Did you know? This blog is just a clever cover story for a boutique and savvy marketing and PR consultancy serving B2B tech. Check out our services.]

Cision said it’s acquiring Brandwatch “for $450 million, in a combined cash and shares deal,” according to TechCrunch. Brandwatch provides “social listening” which is industry jargon for old-fashioned social media monitoring.

The U.K.-based Brandwatch has raised about $65 million and previously made an acquisition of its own.  In 2017, the company acquired a then buzzy new tool called BuzzSumo, which is also based in the U.K. It later merged with near-peer Crimson Hexagon in 2018 and acquired Qriously, a survey tool, in 2019.

In the last several years, Cision has purchased at least four other companies with social media monitoring capabilities. However, Brandwatch claims it uses “artificial intelligence” to analyze social media, which is perhaps the motivation.

Catch up time in AI

AI is something that is missing from most of the incumbent PR software tools. While many offer natural language processing (NLP) – a precursor to machine learning and AI – this has been part of standard media monitoring capabilities for a decade or more. Many vendors outsource this capability even as they embed it in their platform.

However, a number of startups are beginning to use AI in new ways. This includes PRophet, Propel, and SignalAI.  These startups are doing things that genuinely look innovative. There are also a number of more established companies, like Talkwalker and Isentia, which trades on the Australian stock exchange, that doing interesting things with AI.

So, the pressure may be on Cision to catch up. As TechCrunch points out “Brandwatch was recently named a leader in Forrester’s guide for buyers of social listening solutions.” The full Forrester report was published in Q4 of 2020 and Cision is noticeably absent from the “Wave” graphic while competitors are represented.

So, while I have deep reservations about Cision getting back to M&A and continuing market consolidation in PR tech, this deal actually makes sense. Even so, it speaks volumes that the company has closed on 16 other corporate transactions in recent history before it got around to thinking about AI.

The deal with Brandwatch “is expected to close in the second quarter of 2021,” according to a press release.

BuzzSumo rolled out journalist profiles. The tool has historically helped PR and marketing search through web content to find those pieces that are being shared the most or have earned the most links.

Now, when it returns any search result, it will also show a profile for journalists it has identified. A little icon next the reporter’s name will indicate if they have a profile. Hovering on the icon will show produce a popup that depicts the profile including:

The screenshot below is an example profile for Erik Sherman who has been a freelance journalist for many years. He cautions those writing pitches against using a tool like this for a cursory glance or pretending to have read his work. Journalists see right through it. BuzzSumo is a great tool for research, but you still actually have to do the research.

Now that Cision is about to own BuzzSumo, I’d encourage the company to make these profiles publicly available and allow journalists to claim them – much like Muck Rack does already. 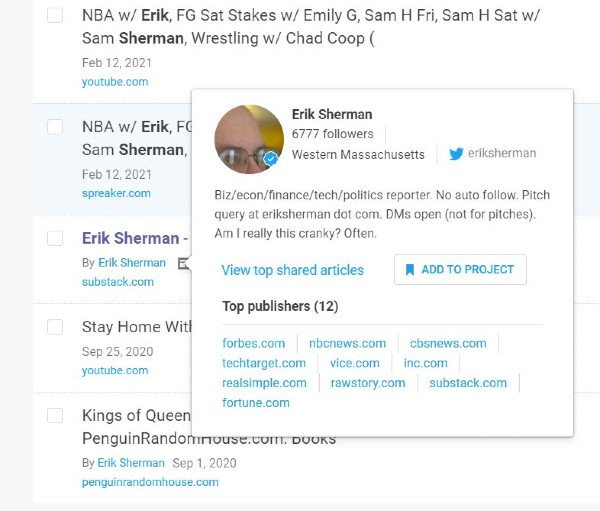 Shama Hyder writes a contribution for Forbes comparing Cision, Meltwater and Propel. While I respect her opinion, as someone that studies the PR technology marketing closely, I have a different take on a few aspects.

First, while Propel has demonstrated market traction and looks promising, it is not the first or only solution to link profiles with news coverage, facilitate a workflow, define a unified experience, or call for replacing spreadsheets. Why compare Propel to these two – and not any of the other new companies that are also promising?

Second, I disagree with her characterization of Muck Rack. Muck Rack is a comprehensive all-in-one tool – and it puts customer service front and center. It’s a very credible competitor (see product briefing).

Third, there are other competitive all-in-one tools in the market like Agility PR Solutions (see product review), Critical Mention, and Notified (by Intrado) (see product briefing).

Intrado, which was formerly known as West Corporation, which was acquired by the PE firm Apollo Capital Management in 2017 for $2 billion could potentially rival Cision or Meltwater in terms of resources.

Similarly, Agility PR is owned by Innodata (NASDAQ: INOD). In terms of pocket depth, Innodata did ~$56 million in sales in 2019 and has a market capitalization of $160 million. It’s not a huge company, but it’s not a start-up either, and has access to public markets.

Finally, CoverageBook isn’t a good comparable. It’s not an all-in-one tool by any stretch of the imagination.

What I do like about her article is that’s she’s driving a conversation about PR technology. There just isn’t a lot this currently, which is why I started writing the PR Tech Sums, PR Tech Briefings and the occasional PR Tech Product Reviews.

I’ve also been able to do some survey research on PR technology: Here’s a list of PR tech companies recommended by your peers in PR – and here’s a list of other PR tech vendors I track monthly. 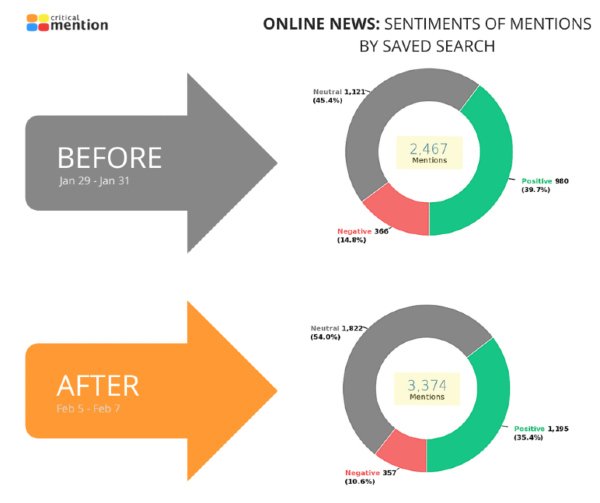 [Need help with marketing or PR? Get more than a proactive partner – add an extension to your marketing and PR team. Check out our services.]

Media coverage PR earns can drive searches for branded terms which technical SEO experts say can be more powerful than...