The Top 10 PR Tech Vendors by Familiarity and Favorability 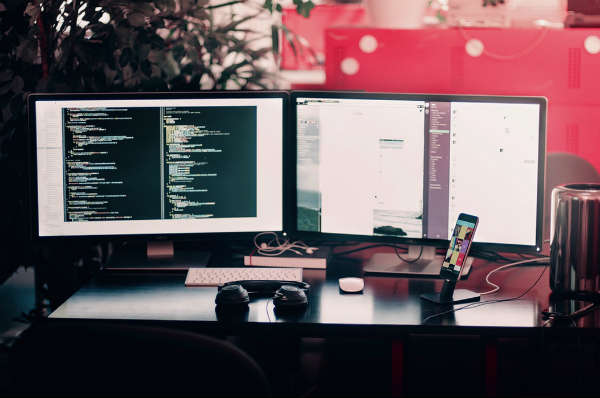 PR pros and reporters alike will criticize the excessive use of adverbs, adjectives and quotes that have little substance.

The exercise of getting a release through reviews and approvals can take longer than does the process of writing one.

Communications professions placed press releases near the bottom of a long list of priorities for the next 12 months, according to the 2019 JOTW Communications Survey, a collaborative effort between Ned’s Job-of-the-Week and Sword and the Script Media. Those results echoed views expressed about press releases on the same survey last year.

Yet when PR pros were asked an optional question about which communications technology vendors they viewed as most familiar and favorable, the press release vendors came out at top of the list of top 10.

Here’s how the answers stacked up: 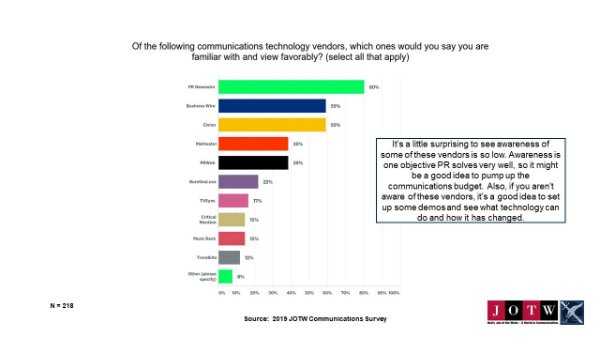 A more detailed view shows some of the other PR technology vendors on the list:

Those that selected “other” wrote in to identify EurekAlert, Factiva, Nasdaq IR Insight, Mention and Talkwalker.

If you are a vendor that was not mentioned, and you have a focus on PR and corporate communications, contact me and I’ll add you to the list here and put you on the list for this survey question next year – and also to the PR technology summary (PR tech sum) I published every month.

Those companies to be added include: 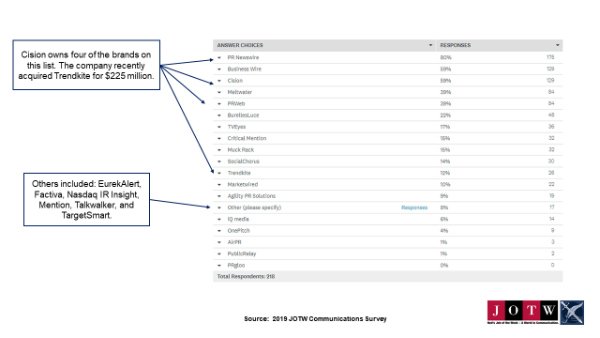 As with many of the questions, we provided a space for open-ended commentary. Here are some of the verbatim comments:

“Heard of a couple of them, but don’t have any strong opinions of them.”

“Familiar with a number of them, but don’t necessarily look at them ‘favorably.’”

That third point underscores the fact that this question was double-edged – we asked about both familiarity and favorability at the same time. Part of the thinking behind that question was simply time: the survey questionnaire this year was already long and yet we wanted to include at least one question about technology.

We will improve this next time, perhaps decoupling the question.  Even so, these survey results raise an eyebrow. Only three out of dozens of PR tech vendors ranked with 50% or more awareness among the public relations profession. Further, two of them are press release distribution companies that have been around forever.

Only three out of dozens of PR tech vendors ranked with 50% or more awareness among the public relations profession.Click To Tweet

The third company on the list, Cision, has been on a buying spree. Its acquisitions have included one of those two press release companies – Cision bought PR Newswire for a reported $841 million in 2016.  It may be worth noting,  Warren Buffet’s Berkshire Hathaway owns the other one (Business Wire).

Clearly, there is a need for PR professionals to have access to better coverage of technology companies in the communications space.

The coverage of PR technology in most trade publications serving the PR community is quite is slim. I know this first hand because I spent nearly four years as the public relations director for a sizable vendor in the space (that has since been acquired).

While they did and still do cover some financial transactions, there just wasn’t a whole lot of appetite for product announcements among the media when I was in that role.  As an independent observer that still reads those publications today, I still think that’s true and I’d like to change that.

While I’ve dabbled a bit with product reviews – there are two more in the works for BuzzSumo and OnePitch – I’d want to do more.  As such, I’m going to start covering some of the announcements I see from the technology vendors serving PR and corporate communications.

If you are a PR contact for any vendor in the PR space, I’d encourage you to reach out to me and make an introduction (also see Pitches! Read Me).

You should feel free to send me your announcements. I’d prefer to get these through a direct message on Twitter, which makes it easy for you too. Email is fine to get started (inquiry -at- swordandthescript -dot- com).

I may also consider an Off Script Q&A interview, but probably no more than a couple per year.  This series has been running for several years now and seeks to interview communications professionals and leaders doing real work in the space.

The second annual survey was conducted by yours truly in collaboration with Ned Lundquist. Ned launched “Job of the Week” (JOTW) email newsletter in 2001 as a free resource for PR and communications professionals looking for work.

Posts published here about this year’s survey, and last year’s survey can be found on these pages grouped under the tag JOTW.  Some of the more recent posts include the following:

Also, see some of the unique takes on the survey from around the PR community:

Outperform: The Skim on 3 Credible Studies About the CMO [UML]

Whether you are a CMO or not, if your work is related to marketing, then the challenges and opportunities facing...