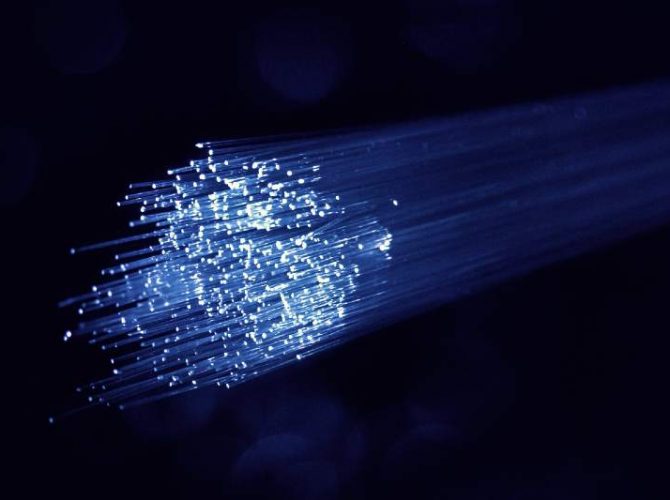 New York, California, Texas and Florida don’t seem to agree on anything these days except they are more likely to use the term “PR Tech” as opposed to “CommTech”

Recently I’ve noticed an article discussing “CommsTech” as opposed to PR tech. These are both terrible terms, but I’ve adopted the latter as the moniker for these monthly roundups about the PR software vendor community – and I’m inclined to keep it.

CommsTech does seem like the broader category. However, the problem is, there are networking equipment makers that refer to routers, fiber optics and soft switches as “comms tech” so the terms can get muddy.

Then I saw another article on CommsTech which was also clearly about PR tech tools. Perhaps this is frequency bias at work, but I thought I should check it out. After all, if more people are using one term, then I maybe I should change my mind about things. (Change one’s mind based on a logical argument is a strength, not a weakness).

So, I consulted Google Trends. You can the results nearby.

What’s amazing to me is that New York, California, Texas and Florida don’t seem to agree on anything these days except they are more likely to use the term “PR Tech” as opposed to “CommTech.” A big part of conflict resolution is finding little things all parties in dispute can agree on. It seems PR tech could save our union, even if Pennsylvania is still a swing state.

This summary of PR technology news – the PR Tech Sum – is back after a two-month hiatus. There just wasn’t enough news to merit a column in July, so I skipped a month.

And now there’s a ton of news after the image… 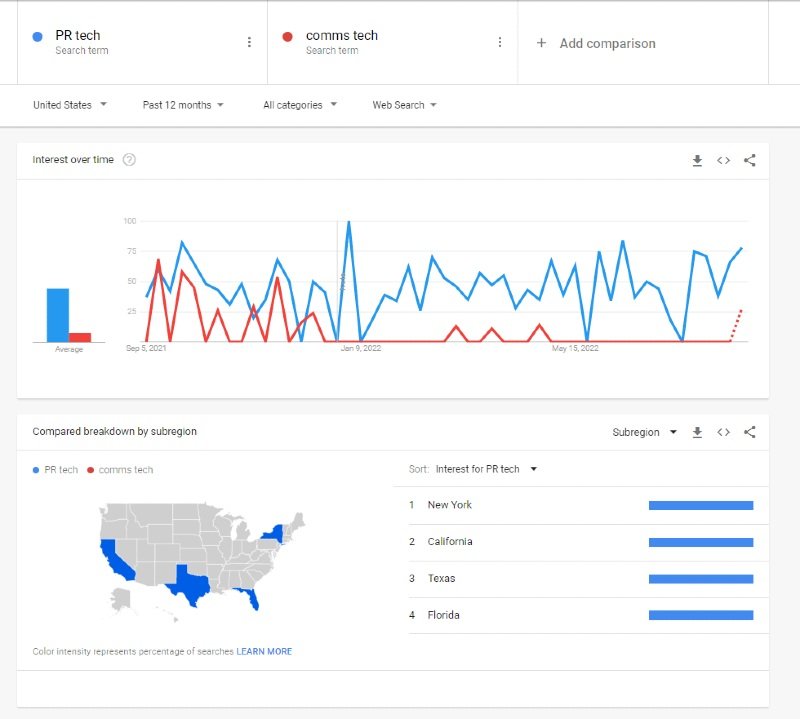 “The corporate reputation sector saw some consolidation this week, as Signal AI, which bills itself as a global external intelligence company, acquired KELP Inc., a reputation platform,” according to reporting by Ray Shultz for Media Post. “Terms were not disclosed.”

Kelp focuses on reputation analysis in sectors like health care, life sciences, aerospace and defense. Its founders – Dan Gaynor and Shann Biglione – have impressive backgrounds in PR and marketing. The former “founded Weber Shandwick’s analytics practice” and the latter “was former head of strategy at Publicis Media.”

Signal AI currently bills itself as a “global external intelligence company.” Previously it referred to itself as a “decision augmentation solution.” I’m going to tip my hat to Occam’s Razor and call it media monitoring solution.

I couldn’t find any financial data on the deal but in a separate piece for Media Post Laurie Sullivan writes that Kelp has 10 employees and  “Signal AI has about 220 employees.” She quotes Signal AI CEO David Benigson as saying, “The acquisition should add between 5% and 10% to top-line revenue this year.”

Signal AI has raised more than $100 million in funding according to Crunchbase.

Onclusive acquired the European “social listening and intelligence platform Digimind for an undisclosed fee,” according to reporting. “Digimind’s technology uses AI solutions and machine learning to provide global social media listening and comprehensive analysis across all major social platforms,” the company said in a press release.

It looks like a leveraged buyout and I’ve seen mixed signals about what Digimind might be worth. The SaaS database GetLatka says Digimind didn’t raise any funding, was founded in 1998 and finished 2021 with $18 million in revenue and 600 customers. PitchBook says the company raised three rounds and grew to 210 employees.

This is the fourth company to be folded into Onclusive in a short period of time. Following a three-way tie-up in January of 2022, the company acquired Critical Mention a few months later.

Cision is expanding the sponsored placement feature for press releases that it offers through its PR Newswire distribution service to include Europe and Canada. The service enables customers to convert “their press release from PR Newswire into a digital media asset that can be…placed across paid publications.”

This is effectively native advertising, which Cision says is “proven to be more trustworthy.” I agree, but only because native advertising tricks readers into thinking its bona fide coverage. At least the company has backed off its previous claims of “guaranteed editorial” coverage.

In any case, I believe this is a tough sell and the market just isn’t there yet. This is because, as the JOTW communications survey has shown previously, PR has a lukewarm view of sponsored content. That’s not an isolated finding either.

Even in B2B tech, where most of the 41% of PR pros that do report to CMOs have greater alignment with marketing, it’s really difficult. Why? PR can’t drop $2,000+ on a press release and then sheepishly ask the CMO for a sponsored content budget.

“Cision US Inc. and sales representatives who say it deliberately cheated them out of overtime pay can settle their wage-and-hour dispute for $325,000 after a federal judge in New York signed off on the deal,” according to Bloomberg Law.

“The public relations software firm allegedly ran afoul of federal and state wage laws by failing to appropriately pay sales representatives who worked overtime. Each worker’s net recovery represents about 30% of their alleged unpaid wages, in line with what other judges have deemed fair, the US District Court for the Southern District of New York said.” 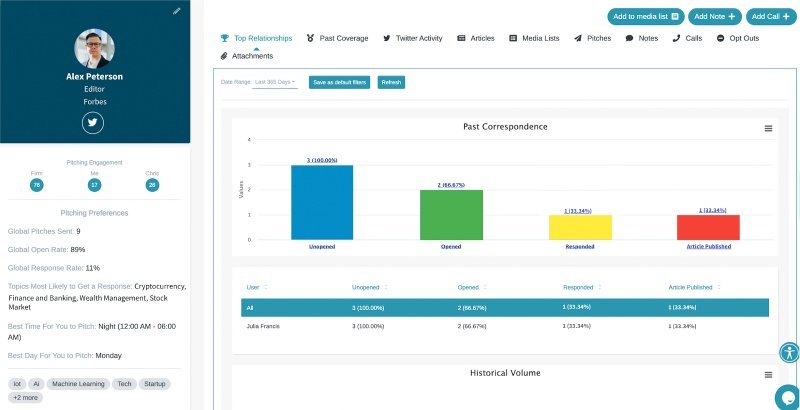 Be sure to check out these posts and podcasts on the latest JOTW communications survey: 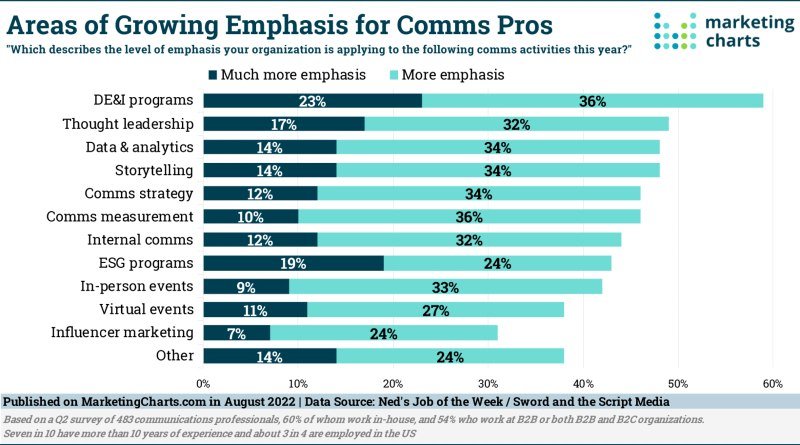 “Depends on the media outlet.” wrote one respondent. “Some [media outlets] are fair; some are not.” More communications pros say...