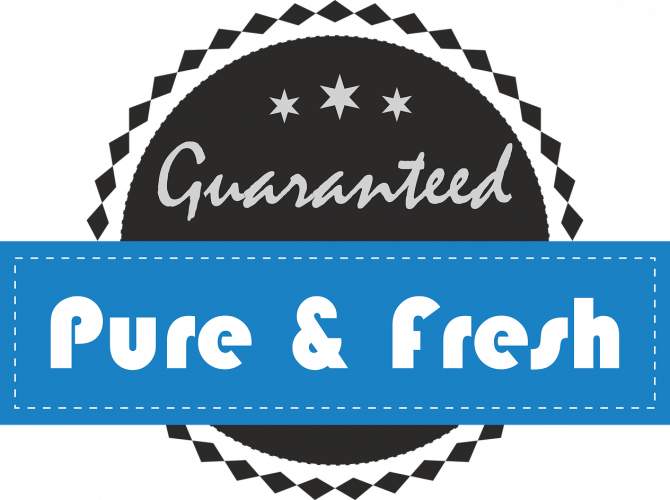 One thing that separates PR, and specifically media relations, from marketing and advertising is third-party validation: there’s nothing you can say about yourself that’s as powerful as someone else saying it about you.

That’s the “big story” in this month’s PR Tech Sum.

Cision said customers that use its PR Newswire distribution service “can now secure guaranteed editorial placement across thousands of premium publishers.” It’s doing this through a partnership with an adtech company called Nativo, which as the brand name suggests, is a native advertising platform.

Press releases have always essentially been a “paid placement.” This is why Google requires links sent through these services to be marked “no-follow.”  So, how is this different?  Here’s an explanation.

Traditionally distribution services pay new sites a small fee every time they syndicate a press release. This is part of what you pay for when you fork over up to $2,000 for a press release. Of course, these sites know most of the press releases have little value to their readers, so they create a back page that’s buried out of sight.

This is how you wind up with a press release on a local ABC news affiliate in Buffalo even though your tech client is in San Francisco. Or the Longview Journal in the case of this particular announcement.

Some of these syndications, or “pick-ups” are better than others. For example, if your press release lands on MarketWatch or Yahoo Finance, that tends to get visibility, especially if your company is publicly traded. In many ways, in this context, press releases are trying to masquerade as editorial news even though they are in fact, paid placements. Add to this, the value of these pick-ups is small and diminishing in recent years.

What Cison is offering today is a twist: they’ll take that press release and turn it into a sponsored post:

This sponsored post will get better placement on a site as an explainer video embedded with the announcement says on the home. The company didn’t disclose pricing, but you can be certain this will cost significantly more. I’d imagine there are targeting options too.

What to make of it?

I think this is an interesting idea – sponsored content should be part of the communicator’s toolkit – especially if you use paid media to achieve earned media goals. Old fashioned press releases and advertising can lead to bona fide editorial coverage.

This move toward sponsored content also fits with Cision’s clear effort to cozy up to the marketing side of the house over the last few years. They have previously offered re-targeting based on earned media audiences, which is rather novel.  The problem for the company is that doesn’t appeal to the ~40% of comms professionals that report to a CEO or CCO.

NOT an editorial placement

There’s one significant problem will all this: the announcement pitches this as enabling “PR agencies to sell robust guaranteed placement packages to their clients.” Are you kidding? That’s misleading in my opinion.

Sure, a PR firm can sell advertising, but that’s not the issue. The issue is this is NOT a “guaranteed editorial placement.” In fact, it’s not an editorial placement at all. It’s sponsored content, which is a form of advertising, which is unquestionably paid media. Cision – the Swedish company that grew up making printed directories of media contacts – ought to have the institutional knowledge to know better than to call it as such. 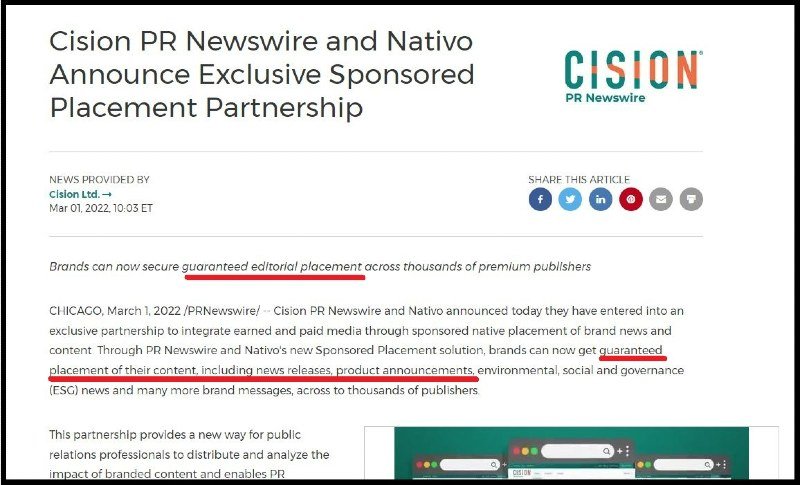 One number I like to look at is what the company spent on R&D, because that’s how PR people wind up with better products. It spent $40.5 million on R&D in 2021, which works out to about 10% of revenue. By contrast, Meltwater spent roughly $100 million on three acquisitions in 2021.

It’s hard to find a good comparable to understand if that R&D spend is good or not, so I looked at HubSpot (NYSE: HUBS). HubSpot spent 18% of revenue in 2021 on R&D.

The company said it added “86 Premium Customers” and finished “the year with 3,848 Premium Customers in total.” Premium customers account for about half of the company’s annual recurring revenue (ARR) which grew 55% in 2021. The earnings release named new customers in this segment “as Marriott International, Nike, McKinsey & Company, Lego and Bayer.”

Another interesting number in the earning presentation is the total addressable market (TAM). It puts this number at $40 billion, which is the most generous estimate I’ve ever seen. It breaks the market it into two segments PR, marketing and communications ($26b) and lead generation, risk management and customer relations ($14b).

The research firm Burson Taylor puts the PR software market at $4 billion, but it’s an educated guess. The total PR market size, including services, has ranged somewhere between $10-$15 billion for many years. It’s really difficult to calculate this number – how do you account for in-house comms salaries and revenue from small consulting shops like me?

Back to the Meltwater TAM, what this means for PR customers, is that you are not the only focus anymore. Meltwater has its eyes on adjacent markets. That could be good or bad for you depending on where PR sits in your organization; it’s definitely a question to ponder in procurement. It’s pretty telling that the two largest vendors in PR are looking for new customers that are not in PR.

The company has repurchased about 600,000 of its shares in the last month and company insiders have also made stock purchases. This is often a public signal a company can send to show the market it believes what it’s saying. 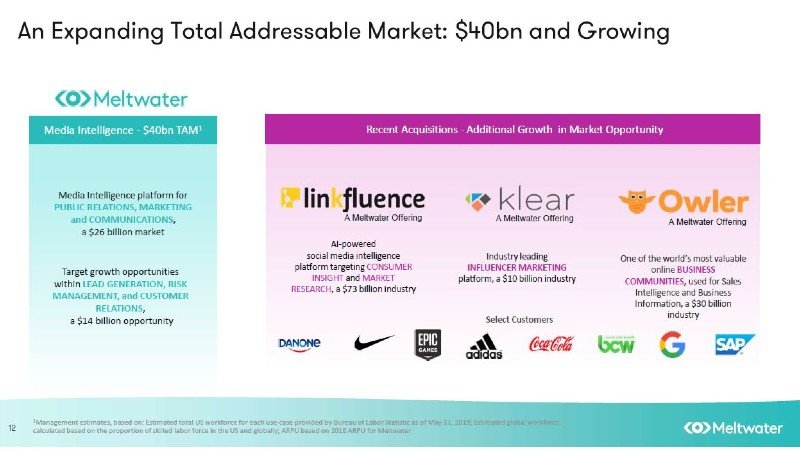 Truescope raised $6.2 million in first round of funding and plans to enter the U.S. market. The Australian startup is co-founded by John Croll and Michael Bade, both formerly of iSentia – where Mr. Croll served as CEO. The company has been self-funded to date.

Truescope is focused exclusively on media monitoring at this point. It has “more than 250 corporate and government clients across Singapore and New Zealand,” according to the announcement. The company says it “will maintain focus on growing these markets while employing an expert commercial team in the US, which will be announced in the coming weeks.”

I’ve spoken to Mr. Croll recently and he’s given me a close look at the product. My impression is that he seems to be plugged into the market, open to market feedback and has experience growing and leading a technology company. I also welcome new competition to the market because we need it.

Here’s a roundup of other news and links from the world of PR technology.

A Look at the Media Monitoring Tool Truescope is Bringing to the U.S. [PR Tech Briefing]

In spreading an untrustworthy statistic about the attention span of humanity, we’ve been smearing goldfish as well That goldfish statistic...