Home > Popular Posts > Should the Public Relations Report to the CEO or CMO?

Should the Public Relations Report to the CEO or CMO? 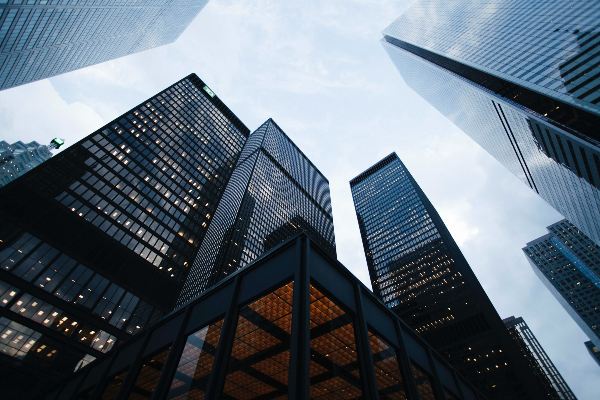 Many corporate public relations shops report to the CMO but PR professionals argue the function should report to the CEO; the “right” answer probably depends on the organization

Whenever an organization gets an inquiry it isn’t sure how to deal with, it’s often routed to the PR or corporate communications (corp comm) department for triage. That speaks to the well-rounded nature and problem-solving capabilities of the professional communicator.

While a problem solver can be productive in almost any organizational structure, communicators often find themselves reporting up through marketing channels. However, in times of business stress and crisis, PR will find itself working more closely with executive leaders.

For example, a recent survey by Ragan Communications found that about 50% of PR professionals say they are working more collaboratively with the C-Suite as a result of the Coronavirus pandemic.

Indeed, the pandemic is challenging many strongly held business assumptions – like butts in seats – perhaps it’s time to re-think how the communications shop is organized to best serve the organization.

Who Does PR Report Currently?

Most respondents with communications or PR responsibilities report to the head of marketing (41%) according to the 3rd annual JOTW Communications Survey for 2020. Another one-third (33%) say they report to the CEO, while the remainder is spread across other reporting structures including the COO (7%), human resources (5%), strategy (5%) and legal (3%).

The JOTW survey is a research project I conducted in partnership with Ned Lundquist and Ned’s Job of the Week Newsletter. The 2019 edition of the survey had similar findings with 38% of respondents saying they report to the CEO while 35% reported through marketing. 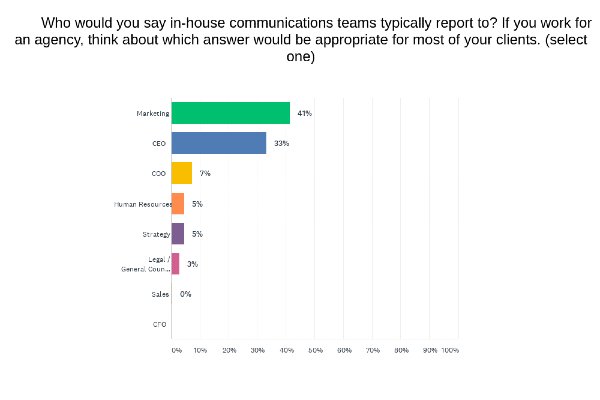 Where PR Should Report?

The JOTW survey polled 300 communicators this year, and it asked where PR currently reports. That’s a different question than where it should report.

Out of curiosity, I posted a survey question to Twitter. In about 24 hours, the poll had accumulated 337 votes – a level of activity that suggests this is a hot button issue for many.

Here’s how answers turned out in response to the question: who do you think PR and comms shop should report to?

Although Twitter polls don’t offer demographics, I can derive from the comments that most respondents come from a PR or communications background. The views expressed are held both in the US and the UK.

Put whatever the comms org reports aside for a moment: Who do you think #PR and comms shop *should* report to?

Four options here (the limit). Please reply and specify if there's another you think another (i.e.. Legal)

It Depends Who You Ask

There’s an old analogy in market research, that if you ask the Pope if you can smoke a cigarette while you pray, he’s going say “no.” However, if you ask him if you can pray while you smoke, the answer will invariably be “yes.”

The lesson of course – aside from the notion that smoking is bad for you while praying could be good – is that you have to be careful about drawing blanket conclusions from survey questions because the answers often depend on who and how you ask. And so it is with the question of PR structure: the answer depends on who you ask.

So, to bring perspective, below are a few other relevent studies to ponder.

The Evolution of the Marketing Organization, a study by Deloitte and the CMO Club, found that while 11 different marketing disciplines reported to the CMO, public relations was not often among them. However, 56% of respondents said PR should report to the CMO.

Deloitte surveyed 400 CMOs for their report. Most CMOs I know would prefer to have PR as an asset on their team, and while their view bears merit, that doesn’t mean it’s automatically the optimal reporting structure.

The 2019 Global Comms Report by Center for Public Relations at USC Annenberg found about 45% of communicators reported to the CEO while 28% reported to marketing.

Since marketing is aligned with sales, that chat changes the role of the communicator, right? Maybe not.

The survey found a sizable gap in the perceived goals for communications: 44% of CEOs said selling products and services was the top communications goal while just 25% of in-house communicators identified sales as the top goal.

A survey – How Executives in Large Companies Perceive PR – by a UK-based tech company that develops software for PR shops, found that few executives understand PR. However, those business leaders that understand the function of communications tend to value it more.

The survey solicited respondents from 300 executives in UK-based businesses with 1,000+ employees.

It Depends on the Organization Too

Because I work in the B2B technology sector I tend to look at things through those lenses. In my experience, PR is best reporting to marketing with business are in startup mode.

Most startups don’t have the resources to stand up separate marketing and comms shops. More importantly, the focus has got to be building sales traction, and so the role of PR should lean towards marketing communications (marcom).

In large global organizations, the model tends to fluctuate between centralized and decentralized communications. It’s one way for a few years, then after a shuffle in the C-Suite, it changes back to the other way. A model I’ve seen work for large enterprises is to retain a corporate communications department but push dedicated PR talent down to support the business units.

Considerations for the Comms Organization

In the Twitter poll mentioned above, I asked respondents to comment on why they voted the way that they did. Below are a few that stood out for me. Most of these are paraphrases to account for the shorthand of Twitter; I’ve linked directly to their remarks to show them in context.

The line between PR and marketing has been blurring for years. In my mind, public relations is a discipline, but it’s also an approach. I’m a long time believer that the future of marketing looks more like PR. I think that’s exactly where we are today.

Public relations has wrestled with messaging during the COVID-19 pandemic, but studies also show it has improved business collaboration and...