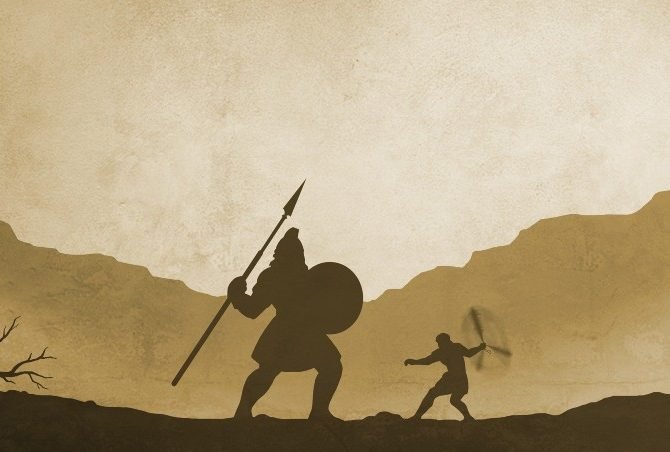 The PR technology space can be in some respects, divided into Davids and Goliaths.

On one side, we have giants, which are backed by PE firms, holding companies, and in a couple of cases have access to the liquidity of public markets. They have seemingly infinite resources and insurmountable access to talent and machinery.

On the other side, we have small independent companies trying to break into the space. Some are pure-play vendors focused on a niche, while others strive to be all-in-one. Their ability to win, however, seems as improbable as David’s victory over Goliath.

Yet David’s victory wasn’t improbable, as Malcolm Gladwell once wrote, and later relayed in this Ted Talk (I highly recommend watching it). In fact, everything we’ve come to believe about this story might be wrong – along with two key themes:

First, David isn’t an unlikely hero. He is a practiced expert with a sling. This is a weapon that has ballistic characteristics that mirror the stopping power of a modern handgun.

Second, what we all perceive to be a source of Goliath’s strength, his size, is caused by an abnormality that brings with it a weakness; he’s blind.

It’s not a perfect analogy, but I think we are seeing something like this in the PR space.

The small independent companies may not be so small anymore. They may in fact have the decisiveness to spend marketing or R&D where it matters.

On the other side, all the dealmaking has weighted down the giants with more than they can integrate. The equity owners wrote big checks for those transactions – and they aren’t inclined to write another. What makes them appear strong, is actually a weakness.

Onward with the PR Tech Sum…

Muck Rack announced a $180 million Series A minority investment from Susquehanna Growth Equity earlier this month. This is the first outside investment the company has taken, which has been boot-strapped its founding in 2009 by Galant and Lee Semel. Two managing directors from Susquehanna will join the Muck Rack board of directors.

The company was imprecise about what it intends to do with the funding, other than to say it “will support continued growth and enhance offerings for global customers.” Typically, a Series A is an investment made by venture capital firms in companies that are still in the early stages. It’s often used to build out a product, hire talent and mature a company’s processes. Clearly, Muck Rack is more mature and so and it’s a surprise to see the company take this kind of money.

It’s worth pointing out this is a large investment by any standard, so it’s incredible to see this sort of money poured into a company in the PR tech space that doesn’t involve an acquisition. Similarly, the timing matters too. Investors have pulled back amid economic uncertainty. There just aren’t a lot of companies than can land a even few million dollars in funding in this environment right now.

To place this in context, Propel, a startup with an all-in-one tool raised $4.5 million in a seed round (typically prior to a Series A). Prior to that, TrueScope, which is a pure-play monitoring company – led by an experienced CEO – raised $6.2 million in a Series A.

Here’s one more: Vocus was one of the earliest technology companies in the PR tech space. The company provides a useful context for understanding the scale of Muck Rack’s funding announcement this month. Sure, it’s an older comparable, but one of the few companies in PR tech that grew up with venture capital went IPO and ran for years after as a successful company.

Vocus raised a little more than $13 million over two rounds of venture capital funding according to Crunchbase. It survived the dot-com crash and would later raise $45 million during its IPO with a valuation of $133 million.

But in its last full year as a publicly traded company in 2013, prior to its sale to GTCR (and eventual merger with Cision), it did roughly $187 million sales or a little more than the Muck Rack funding round. The point is, Muck Rack must have both numbers and a sound equity narrative to justify this sort of funding.

While the company hasn’t shared hard numbers it did put out percentage growth. It claims it saw “75% year-over-year revenue growth in 2021, and more than 300% revenue growth over the three-year period from 2018-2021.”

Oddly, coverage of this in the traditional PR trades was scant. I didn’t see any coverage in PRWeek, Ragan, PR News, or PRovoke. O’Dwyer’s ran a news brief but it doesn’t show up in search. Fortunately, there are some other publications that dug into this including Axios and TechCrunch.

Axios, which seems to have done an actual interview, which is rare these days, noted:

“It soon plans to release its own API (backend computer interface) that makes it easy for companies to integrate Muck Rack’s analytics dashboards with a company’s existing marketing stack.”

And with a nod to the Muck Rack origin story:

“It will also continue to invest in the free services it offers for journalists and creators to showcase their work.”

TechCrunch summed up the story in the messy context of social media opinions sometimes passing as news:

“The big question for a company like Muck Rack — or its competitors for that matter — is how they will evolve with the times to reflect that mass communications landscape.”

Cision ought to be very nervous about this investment. Muck Rack now has the resources to compete on the same playing field with a modern and homogeneous technology platform. And they don’t have the baggage Cision has accrued with its patchwork of acquisitions, high executive turnover and frequent change in equity ownership.

I took an in-depth look at Muck Rack for a PR Tech Briefing a couple of years ago: Muck Rack Aims to be an All-in-One PR Tech Platform for Media Contacts, Outreach and Monitoring.

I also put together a presentation for a conference of agencies interested in purchasing technology earlier this spring that might be of interest: The PR Technology Landscape 2022.

Meltwater announced review of strategic alternatives. According to a news release:

“The board of directors has appointed J.P. Morgan and DNB Markets, a part of DNB Bank ASA, to advise on and evaluate certain broader strategic alternatives for the Company. Indicative proposals have been received, but the discussions and evaluations are at an early stage, and there can be no certainty whether (or when) any transaction, initiative or event will materialize.”

A review of strategic alternatives is often – but not always – a code for “we’re hanging out a ‘for sale’ sign.

Meltwater, which is publicly traded in Oslo (MWTR) reported Q2 and H1 earnings in late August. The company paints a pretty rosy picture including $110 million in revenue for the quarter and “12% year-over-year” but flat compared to Q1. It also posted a smaller loss of ~$200,000 for the quarter compared to Q1 but has tallied losses of $79 million for the trailing 12 months (TTM), according to Yahoo Finance.

It’s worth bearing in mind, I’ve observed before, Meltwater seems to be pursuing the larger marketing space outside of PR and comms.

B2B marketing should take a little slice of the display ad budget and invest in media relations, genuine content marketing...