There isn’t a whole lot of coverage about PR technology. I got to thinking about it when putting together this piece – The Top 10 PR Tech Vendors by Familiarity and Favorability – and decided I’m going to do something.

First, I believe there’s a need and niche to be filled – innovation in the PR space is getting interesting again.

Second, I have a background with PR tech, having spent several (hands-on) years at in-house at Vocus as their PR director. Vocus owned or acquired brands like PRWeb, Help A Reporter Out (HARO), iContact, and several lesser-known social media technologies.

Third, as a PR agency owner that specializes in B2B technology, I simply have an interest in keeping tabs on the ways technology is transforming my industry. I don’t work with any PR tech vendors presently, and if that changes, I’ll be sure to disclosure it.

For now, I’m thinking of putting together a summary (sum) like this once a month. I’ll include news from the PR vendor community and review and curate content they produce (like this).  In addition, I’m going to strive to supplement that with some deeper dives into the tools – in total, the idea looks something like this:

a) the PR Tech Sum (monthly)

b) and occasional PR Tech Briefing based on product demonstrations (quarterly); and

c) PR Tech Reviews based on my review of the technology (1-2 per year).

To be clear, this is a trial, so I’m not entirely sure what this will become; I welcome your feedback online or offline. And with that, here’s a go at the first PR Tech Sum…

AirPR has changed its name to Onclusive, which is “derived from the words ‘conclusive’ and ‘inclusive’”, according to a company press release. Onclusive is developing new ways to measure PR including attribution. In short, the technology can tell you if someone read a story you earned – and later visits your website – without a referral link in the article.

Onclusive also announced the acquisition of Ozmotik which will help PR discern which earned media is the most valuable. Next, it can “automatically deliver this content to more of its target audience using digital media amplification,” according to a blog post by Onclusive CEO Dan Beltramo.

From my perspective, this is paid a distribution of earned media that looks to me like something you might see from adtech like Outbrain or Taboola – but helps you chose the pieces with the best chance of success. I’ve written quite a bit about paid media on these pages as a sound way to amplify a media mention once you’ve earned it – and it’s run its organic shelf life. More and more, PR needs a little paid budget to use strategically to earn media (targeting) and to get more value after you earn it.

Onclusive has raised $21.4 million in venture capital, in four rounds of funding since 2012, according to Crunchbase. The company currently has 47 reviews on G2 Crowd.

According to a press release, channel management:

“Allows team and frontline managers, outside of the internal communications team, to create and post rich content – including videos, images, links, articles and notes – within approval guidelines….For example, a frontline manager at a specific plant could be granted management of the channel for his location, scaling the relevant content for that group without restrictive oversight.”

SocialChorus ranked in the top 10 on a question for the 2019 JOTW Communications Survey asking PR respondents to rank PR vendors by familiarity and favorability. The company has raised $37 million in venture capital, in four rounds of funding since 2009, according to Crunchbase.  SocialChorus currently has 21 reviews on G2 Crowd.

3) Teletrax by 4C and iQ Media merge and form Kinetiq

Marketing technology company 4C has acquired a stake in TV media monitoring company, iQ Media. In addition, iQ Media is merging with Teletrax, which is a company 4C acquired in 2015.

The merged entity will be called “Kinetiq” and a press release says it will be the “world’s largest unified TV intelligence network, offering paid and earned media measurement, monitoring and signaling across local, national and global markets.”

“iQ Media’s monitoring of paid and earned brand mentions covers the U.S. – all 210 U.S. DMAs – in real-time and from historical broadcast TV and media content. It also gains data from brand sponsorships and events.”

Using fingerprinting and watermarking technology, Teletrax conducts research into brand content in more than 85 countries — around 2,500 TV stations — and more than 500,000 indexed ads from over 32,000 brands.”

The announcement suggests the new entity, Kinetiq, will operate independently of 4C, with its own CEO and board of directors. The company says it will maintain iQ Media’s old headquarters in Philadelphia in the U.S., and European headquarters in Eindhoven, Netherlands.

I became familiar with iQ Media when it was led by former CEO Kye Strance. Mr. Strance was a long-time product manager for Vocus (and a colleague and friend) and he gave me a demo of the iQ Media product in 2014 and the TV monitoring capabilities were very slick.

Crunchbase says iQ Media raised $9 million in venture funding in two rounds since 2011 from Edison Partners, which had also backed Vocus. The company has 22 reviews on G2 Crowd.

Agility PR Solutions was rated by its users as the too media and influencer database for contacts in a report titled, “Momentum Grid for Media and Influencer Targeting | Spring 2019” by G2 Crowd.

“A product’s Momentum score is calculated by a proprietary algorithm that factors in social, web, employee and review data that G2 Crowd has deemed influential in a company’s momentum.”

G2 Crowd defines the category as:

“Media and influencer targeting software is a public relations tool designed to help companies identify and contact traditional media members, social media influencers, and bloggers who have authority in their given industry.”

It’s important to note this report is a snapshot in time and the rating can change. G2 Crowd provides a live and trending view of its grid with the most current data.

In addition, while these rankings are a useful guide, they are not definitive in my opinion. These results are driven by algorithms that haven’t learned to discern some of the nuances.

For example, the same grid lists a product as a top media database that could not make that claim in a U.S. market. It simply does not have the contacts, but international ratings have given it a boost and the algorithms can’t distinguish the difference. I’ve seen this mashup among products on review sites in other vertical markets, so this isn’t unique.

That said, if you are a vendor, I recommend getting a handle on your profile because I do think these sites are picking up traction and the technologies behind them will get better over time.  In addition, the reviews are real. Also, some of these review sites, like G2 specifically, have integrations that can ping your sales reps in your CRM system when a prospect in your pipeline is checking out a competitor.

Agility PR Solutions is a subsidiary of Innodata Inc. (NASDAQ: INOD), which turned a profit in 2018 for the first time in several years according to its income statements on Yahoo Finance. The product currently has 168 reviews on G2 Crowd, including this one:

“Agility has made life much easier as we’ve grown our agency. Being able to share and collaborate on lists, keep a track of notes and comments on contacts and see where other employees are at with their tasks is incredibly handy.” 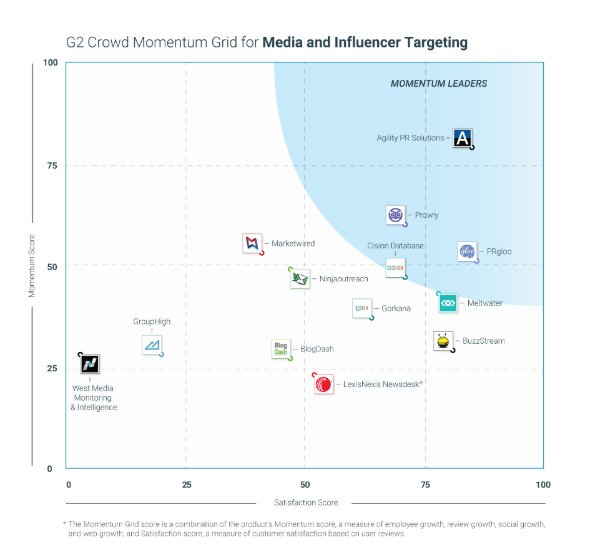 5) Picks from the vendor blogs

I have a couple of dozen vendor blogs plugged into an RSS reader to keep up to speed. Here are a few that stood out for me this month:

If you are a PR contact for any vendor in the PR space, I’d encourage you to reach out to me and make an introduction. You should feel free to send me your announcements. I’d prefer to get these through a direct message on Twitter, which makes it easy for you too. Email is fine to get started (inquiry -at- swordandthescript -dot- com).

Is the process of media relations getting harder? Yes, it is according to 68% of PR professionals polled for the...