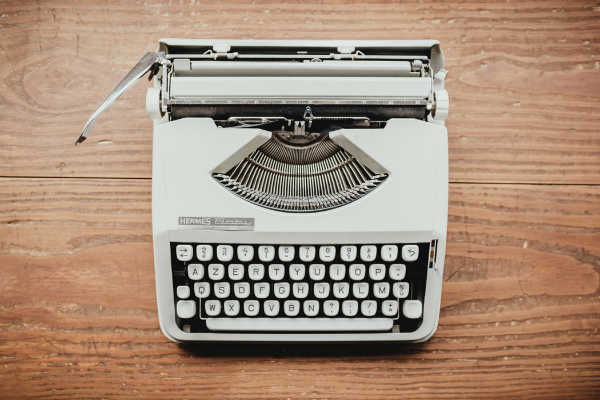 Is the process of media relations getting harder? Yes, it is according to 68% of PR professionals polled for the 2019 JOTW Communications Survey.  That’s up 17% from the same survey last year.

So, what’s PR to do about it? Part of the answer is rethinking traditional PR efforts – and another part is studying the media to understand how it’s changing.

In the last few weeks I’ve stumbled upon a hat trick of studies that can help you do that – and it’s the common denominator for this week’s Unscripted Marketing Links (UML). As I’m wont to do on the occasional Saturday, below is a roundup of three ideas, wrapped in insight and present them here for your perusal (you can click the graphics for higher resolution).

1) The top challenges in journalism.

The State of the Media report by Cision was released this week and provides a window into what’s on the minds of reporters. The 10th annual survey polled an impressive ~2,000 reporters in 10 countries.

When asked about the top challenges faced in the last 12 months, reporters and journalists identified the following:

While the study found, “fewer than 15 percent emphasized subject knowledge expertise” it also found “45 percent of announcements mentioned marketing expertise in areas such as audience engagement, market development and branding.”

I’ll leave the ethical implications of this trend in journalism to the media critics and ombudsmen – but will note it’s introducing new ethical considerations for PR pros. The industry is already geared to sex up stories to land coverage – news by definition covers anomalies – and the ante for pitching angles that are more outrageous gets higher and higher.

At risk of conjuring up my inner Neil Postman, it’s compounding too, because every time a reader clicks on this stuff, an algorithm feeds them more of it, which shows up in the audience analytics the Cision survey finds reporters use to evaluate stories. 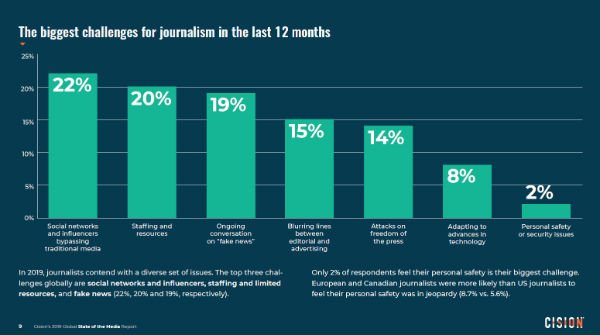 Still, the right influencers can be a helpful component of an overall PR strategy that’s overlooked – as Arik Hanson has noted – especially if media relations is harder for you. In B2B technology businesses, I encourage clients to define a project – a study, white paper, or webinar to test the waters. If that goes well, the relationship can grow to other programs and even events.

Additional reading: The Top PR Challenges and Tips for Overcoming Them

3) Examining publications and the rate of publishing.

Onclusive, the PR technology company formerly known as AirPR, used its own product to examine the growth of media properties, and the volume and rate of publishing. Several statistics stood out for me:

Comment: The decline in the volume of articles by top tier publications is likely related to leaner news organizations. Together, this is a contributing factor to why a majority of PR pros say media relations is getting harder.  There is simply a greater supply of story pitches pitching fewer opportunities among the traditional media outlets. As the Onclusive report notes, “The media ecosystem is not dying. But it is changing.”  PR needs to change with it.

Do you work for a PR tech vendor? You should feel free to send me your announcements about studies and products. I’d prefer to get a link to the announcement through a direct message on Twitter, which makes it easy for everyone. Email is fine to get started (inquiry -at- swordandthescript -dot- com).

Study Reveals Gaps Between the CEO and PR in Communications Goals, Issues and Technology

Usually, it’s wise to ensure your goals nest with your boss’ goals, especially when the boss is the CEO. But...