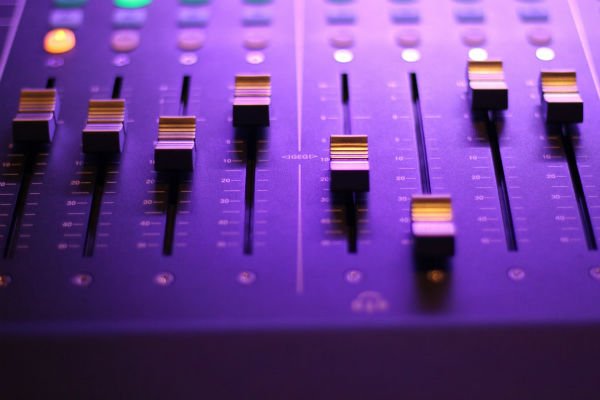 When you think enterprise sales, it’s probably not Disney that comes to mind. Yet that’s what she did – and she managed a book of business worth somewhere north of $180 million. While the brand and the stint in sales have certainly shaped her views, there was another influence whenever she ventured to HQ in Burbank California.

“I got to see supremely-talented women in executive-level roles and I was blown away by the possibilities,” she wrote. “In my previous experiences, I had not been exposed to women in positions of leadership. The women on the brand side at Disney opened up the world to me with their smarts, fearlessness, and wicked talent.”

That experience also sparked an interest in marketing. She left Disney in 2008 to focus on her kids, and when she returned a few years later, her old line of worked dried up with digital formats. That led her down a series of paths including content marketing, ecommerce and today, in B2B marketing.

She is Betsy Hindman, and she’s my guest for the 39th edition of the Off Script series. 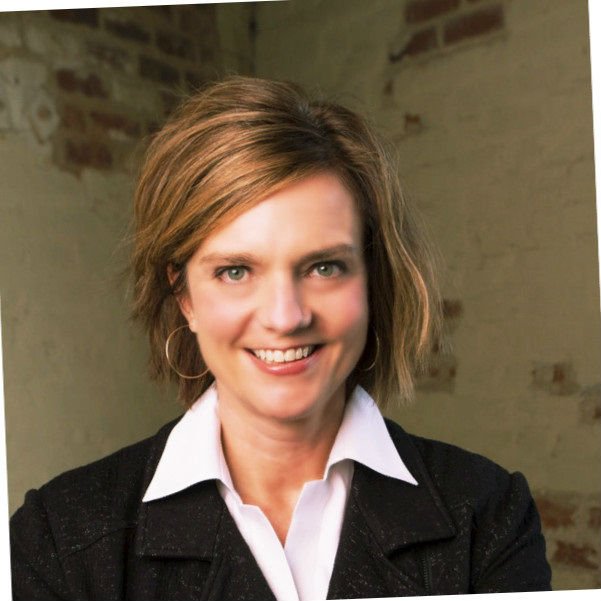 1) Why start a business focused on B2B paid social?

BH: When I stepped into the world of content marketing to understand what was happening there, it was in healthcare. BlueCross BlueShield of Tennessee was looking for a way to reach their key constituencies across the state with news about their various initiatives.

My employer launched a print magazine, website and social presence telling stories about health and community to business audiences, which is still going, BetterTennessee.com. Social media for business was then in its infancy, and we were able to reach both decision makers and consumers with a limited budget and get real traction.

Next, I helped two knitting industry icons reinvent how people buy knitting supplies by taking their highly successful blog and creating a blend of content with commerce: MasonDixonKnitting.com.

During those two experiences, I saw the power of paid social. I saw an opening in the marketplace to translate the capabilities of social media for B2B purposes, and I believe there is still a lot of opportunities there.

2) What is paid social media and how is it different than other forms of paid media?

BH: In the world of B2B, paid social media is the only social media left. As most of your readers are probably aware, the major social platforms have greatly limited free reach for businesses to almost nothing.

Back in the halcyon days of 2008-2009, if you had a business and were trying to reach customers, you could take your 1,000 Facebook followers and end up reaching 3,000 people with an unpaid post. Facebook would distribute it widely and your followers would share it with their friends. Those were the glory days. Now, good luck reaching even 5-10% of your followers with an organic post.

Additionally, it’s not all about Facebook anymore. The platforms where people hang out are more fragmented and the creative competition is steep. The good news is the social media platforms have highly developed, precision targeting for reaching specific audiences. You have to have good content, then pay to distribute it, and the price is going up. But social media is still a good buy compared to some other ways of reaching B2B audiences.

3) Social media tends to have a consumer feel to it, why should a B2B firm consider investing in paid social?

BH: We’re all consumers. While some people are buying shoes online, others are researching business products and services, but we’re all still consuming content on the usual channels.

Increasingly, people are doing it on their mobile devices. Most people are on their phones even at work, a well-designed piece of mobile content via social can appeal to someone in a way that downloading a whitepaper does not.

By using social in combination with other traditional methods, you’re creating what I like to call ‘surround sound’ for prospects. Paid social is just one part of the surround sound, but it’s an aspect that is underutilized by most B2B marketers. I help companies rebalance their business development budgets to add paid social and create a more appropriate investment.

There is a lot of money going into conferences, sponsorships, earned press – and those things are good, but the paid social lever is not being funded with respect to its ability to reach people and build awareness and trust. There’s an investment imbalance and I’m attempting to bridge it. 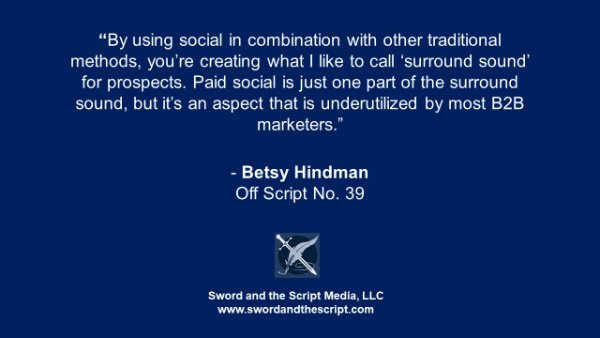 4) You have some background doing paid media work for a public relations firm. Since PR has traditionally focused on earned media. What drove the interest in paid media?

BH: I worked with a Nashville-based PR agency that focuses on advertising agency PR. Their clients were able to see the value of amplifying earned press because, as advertisers themselves, they already value reach and frequency. In other verticals, marketers tend to be too obsessed with attribution to think big like that. Most B2B-lead-gen-focused companies seek to take prospects on a linear death march through their funnel, with little focus on the top of the funnel.

I support the value of amplifying earned media because third-party validation is a real thing, especially if it is from a respected publication. That hard-won earned press can work harder with paid amplification. For one thing, the press may not even be seen by prospects because of the overwhelming amount of content competing for our attention. Earned press should not only be shared multiple times organically but then it should also be promoted to your prospects in their social media feeds.

Bonus points if you take the time to customize the introductory text and image to speak to your prospects by vertical, using their specific industry vocabulary. With LinkedIn, that’s especially powerful because of industry, company name, and job title targeting.

Fortunately, in the past year since I started my own agency, I’m seeing a shift to more of a brand building versus performance advertising focus. Even in B2B, I’m seeing more people interested in the long-term value of old-school reach and frequency that includes paid social but also things like direct mail and sponsorships, which seem to be getting renewed interest. The simmering debate around using gated versus non-gated content is an example of this shift toward valuing brand.

BH: I’m a believer in surround sound, which I referred to earlier, even though I’m a social media advertiser. The reason is that in large B2B purchases there is a buying committee involved.

According to Gartner it is roughly 6-10 people and those individuals are at varying stages of awareness and buying readiness, and they have different content style preferences. Some will respond to your faceless, product-centric whitepaper, while others respond better to meeting you at an event, and others prefer to do their own research online including social media.

That said, my favorite platform is LinkedIn. It is today’s word-of-mouth for professionals. It can provide several options to accommodate content style preferences like video, image carousels, and long-form publishing. It’s no longer just about work anniversaries and job postings. There is useful and educational content and people are going there to get smarter. The people with money to spend and decision-making power are there.

Another reason I favor the platform is because LinkedIn is the only place where you can target your advertising content to people based on where they work, their job title, seniority or skill set. Or use your own email list. The ad platform, while a bit pricey compared to others, offers unmatched targeting capabilities.

I do use other social platforms for B2B audiences, depending on circumstances. Between all of the unique features and capabilities across social, hopefully, I am able to press all the buttons for reaching a diverse buying committee in a style that speaks to them as individuals.

6) What is one aspect of paid media that you think generally goes under-appreciated in marketing?

BH: People under-appreciate the fact that money does not solve all problems with paid media. If an ad is not performing well with an audience because the timing, content or offer is poor, amplifying it does not help. You want to amplify what does work, not what does not work. If you try to shove an overly self-serving article or whitepaper down your prospects throats with paid, you’ll damage that relationship and the platform will figure it out and lower your future distribution.

Also, good images are severely under-appreciated. I look for authentic photos that resonate with audiences – not perfection. Images and video have to be developed for specifically for social use now, as graphics standards are going up and attention is harder to come by. I help my clients develop a look —a distinct POV with images and copy — to help them stand out not only with paid but with organic posts as well.

7) For marketing or PR professional interested in learning more about paid media, where do you suggest they start?

BH: I’d start with joining the #ppcchat that happens on Tuesdays at 11 CST on Twitter, where you’ll find a lot of people who work in PPC advertising and paid social. Then, you can go see where they work, and many of them have very informative company blog pages.

Also, I listen to tons of podcasts such as the Social Pros Podcast, The Science of Social Media, B2B Growth Show (for tactics) and Marketing Companion, CMO Moves, and On Brand (for big-picture thinking).

Whenever I hear a good podcast episode, I tweet it out with #betsysairpods on Twitter but warning…there may be some Vandy sports or country music in the mix on occasion.

8) Lightning round: please answer the following in just a word or a phrase:

You can find more from Betsy Hindman on Twitter, LinkedIn, and her business website at www.hindmancompany.com. She has also been quoted on Facebook’s privacy issues and advertising platform in Digiday, and has shared predictions for the future of LinkedIn advertising.

Recently, I’ve begun looking more closely at PR technology, companies. This is an effort to illustrate some of the interesting...