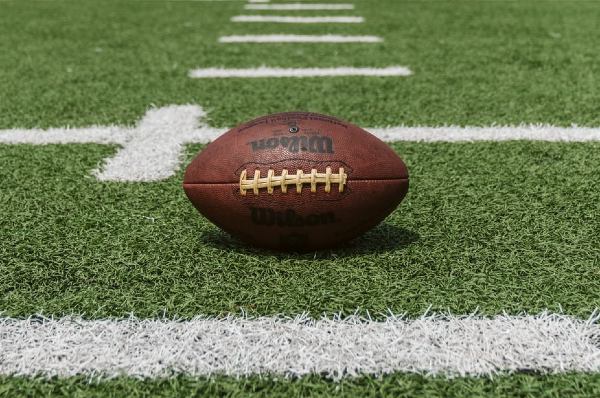 The Super Bowl commercials – along with the ensuing debate and discussion– are worth every marketer’s attention. There is no better place too study a mix of key issues facing marketing such as creativity, budgets and ROI.

That’s the theme for this week’s Unscripted Marketing Links (UML). The UML is an occasional roundup where I discuss three links I think are worth your reading while and present them here for your review.

1) Statistics on the Super Bowl audience and advertising.

Marketing Charts published a piece – Super Bowl 2020 Data  – summarizing advertising research about the Super Bowl from Kantar and the National Retail Foundation, among others.

Some of the key statistics include:

What does an advertising spot cost in airtime?

“Super Bowl ad prices rose 3% for 2019’s Super Bowl 53, with the average price for a 30-second spot reaching $4.51 million, per the latest research from Kantar (Please note that dollar amounts are different from previous year reports due to a methodology change in the underlying source data.) This is the second-highest rate charged for the game, after 2017’s $4.7 million.”

Does the audience actually watch the ads?

The advertisements during this sports event do command a lot of attention, but is it worth the $5 million in marketing spend – not including the cost of production – for a 30-second spot? 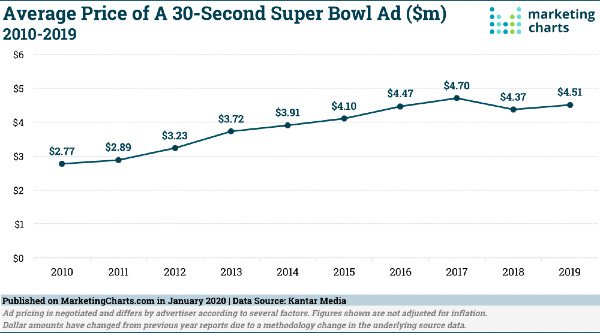 2) What does it take to create an effective Super Bowl commercial?

The Monday after the Super Bowl everyone has an opinion about the best commercials – and those that weren’t so good. But what does the research say about effectiveness?

Paul Talbot, a contributing writer for Forbes, interviewed Satya Menon of Kantar, for a piece titled, Here’s What Research Reveals About 12 Years Of Super Bowl Ads.

The conclusion “validates well-known theories about how advertising works in a microcosm” such as:

“New launches and less established brands leverage the reach and vibrancy of the platform to build awareness and catapult themselves into the big league of power brands.

Established brands are able to spark new interest and engagement with their consumers with strong creative execution that can create meaningful differentiation—either introduce a new value proposition, showcase a brand purpose or simply use offbeat humor to rekindle brand love.”

So, what does it take to create an effective ad?  According to Ms. Menon and Kantar, there are three essential components. The creative must be linked to the brand, the spot must trigger an emotional response from the audience and finally, it has to spark engagement, both online and at the water cooler.

Those sound-like solid considerations for everything marketing does.

3) Should brands mix sports and politics?

Sports used to provide a respite from politics, but the size and attention of the audience have proven irresistible in recent years. Reports suggest Presidential candidates from both sides of the aisle will add campaign commercials to the mix during the game this year.

Does that mean brands should mix sports and politics too?

The answer seems to be a fairly solid “no” – according to reporting by Nat Ives of the CMO Today section of the Wall Street Journal. In his article, Consumers Say Brands Shouldn’t Bring Politics to the Super Bowl, he writes:

“Two-thirds of consumers call the Super Bowl an inappropriate place for advertisers to make political statements, according to the poll, conducted online this month by Morning Consult for CMO Today.”

Nuance matters though, and the decision may depend on who the brand is trying to reach:

“Baby boomers in the poll disapproved of political Super Bowl advertisements more, at 77%, than younger cohorts such as millennials (55%) and Generation Z, defined as those 18-21 years old (43%). But the appetite for big-game politics was smaller than one might expect among young people, who often say they want brands to take positions on important issues. Only 35% of Gen Z respondents to the poll called political Super Bowl ads “very” or “somewhat” appropriate.”

The polls surveyed 2,201 with a 2% margin of error. The results nest with a survey on brands and politics I conducted in late 2018 – The Complicated Business of Mixing Brand and Politics [Survey].

For those interested in more, I published similarly-themed roundups in 2017 and 2019 discussing Super Bowl commercials over time. My favorite SB commercial of all time is the 2011 spot by Volkswagen – and for a reason that I find applicable in all forms of marketing.

Searching for an agency partner brings both expertise and execution?
Try a boutique PR and marketing consultancy dedicated to B2B tech.
Give our services a look and then hit us up!

Few in PR had ever heard of Notified or its parent company. So, it wasn’t surprising that few paid attention...