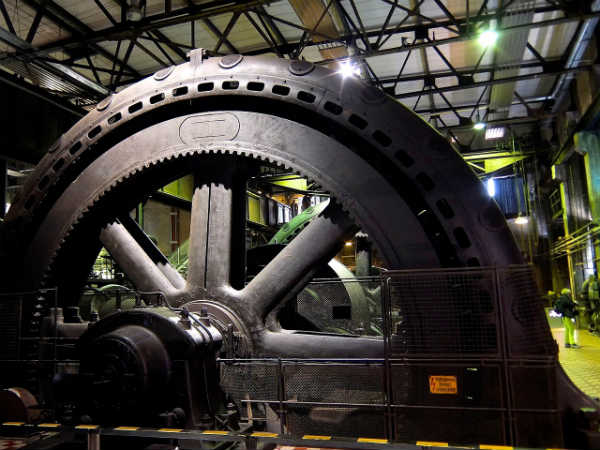 No matter what vertical market you are in, there is no shortage of competition. And more is cropping up seemingly every day.

Competition has advantages in buyer choice and market validation. It also comes with noise as legions of well-funded vendors pour messages into channels in an effort to gain traction.

Good business leaders, let alone good marketers, know that differentiation in word and deed is important, but so too is trust and transparency.

A new study by TrustRadius underscores the importance of trust in B2B marketing.  The company recently published a report that compares and contrasts two aligning surveys of 678 B2B respondents, which counts 438 buyers and 240 vendors.

The results were impressive, so I dived into the report to understand the findings. Here are four key takeaways: 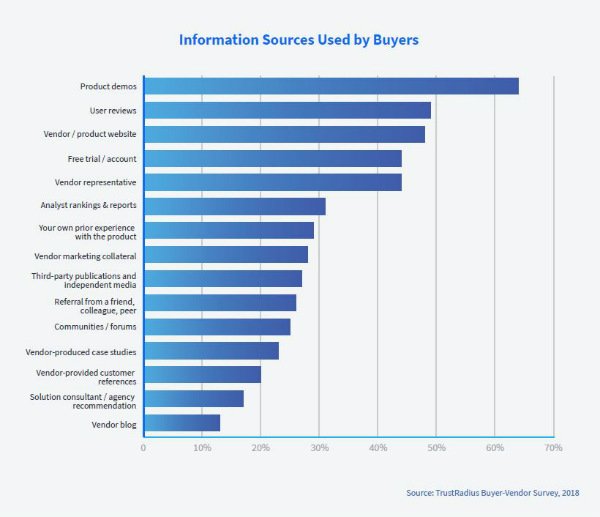 “Buyers use multiple resources when researching products because none are perfectly adequate or trustworthy,” according to the study, which put the average number of resources reviewed at five.

The report noted, “According to buyers, the vendor’s website and representatives are less trustworthy and less influential than the other sources, though they become more powerful when supported by outside sources of information.”

This speaks to the age-old idea of integrated marketing. Today, marketing bats around phrases like omnichannel and multi-touch attribution, but we have to recognize this process is probably not linear and there are aspects that depend on factors – reputation for example – that go beyond the current campaign.

As one respondent wrote in:

“It is clear that buyers continue to want a realistic view of how a product will work for them on a day-to-day basis, and that finding information from sources not controlled by the vendor is crucial to getting a complete picture.”

2) Are vendors *really* investing in the wrong tactics? 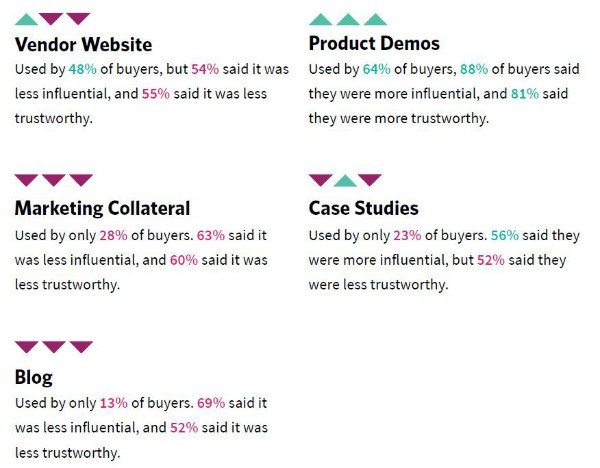 The report goes after the idea that vendors are investing in marketing tactics that buyers don’t really value.   It was reflected, perhaps uncritically, in many of the media reports about the surveys that I read too.

“Year over year, vendors continue to invest in tactics that, for buyers, are not widely used, not very trustworthy, and not very influential. This is likely because vendors are working with limited time, resources, and budget.”

What should marketers do instead is invest in different tactics, according to the report?

“User reviews present a valuable opportunity for vendors to efficiently leverage their customer base and establish greater trust and influence with a broader set of their buyers.”

I have two issues with these conclusions and offer this perspective:

a) I don’t think the data is conclusive that vendors invest in tactics buyers don’t want because of limited time resources and budget. I do think there is data to suggest that the reason buyers don’t value vendor content is because it is not trustworthy. I’d posit that’s because most of it is self-aggrandizing hyperbole, or worse, doesn’t convey a message people can even understand. I like to extend a friendly challenge to TrustRadius to test that hypothesis the next time around.

In the words of one survey respondent:

“It’s hard to find independent information on the internet – everyone has an agenda.”

Now, I think this is a good report and TrustRadius clearly worked hard on the surveys.  There is no doubt in my mind user reviews, as well as product reviews, are often helpful to buyers and therefore also helpful to marketing.

However, I don’t think buyers care so much about the tactics – they care about the veracity of information. Veracity is inherent in the symbolism, word choice, presentation of message and tone among other characteristics. More importantly, the behavioral sciences are increasingly demonstrating stronger evidence that our brains are very good, in fact, evolved, to filter out the noise.

For example, people filter hyperbole in messaging because it doesn’t convey what marketing and sales thinks it conveys. Similarly, people can smell marketing automation because, even when it’s personalized, it’s not really personal, it’s automated and seems disingenuous.

If buyers don’t think a particular medium or tactic is valuable, they are probably right. Yet that’s not the same thing as saying that tactic or medium isn’t valuable. What it does say, is the brands they see using that tactic, are filling it with dubious information, and so they’ve learned not to trust it.

Businesses have an agenda and there’s nothing wrong with trying to create demand or sell useful products or services. However, how you go about doing it does matter and transparency is the key to gaining buyer trust.

3) Buyers are influenced by vendors who are transparent and trustworthy. 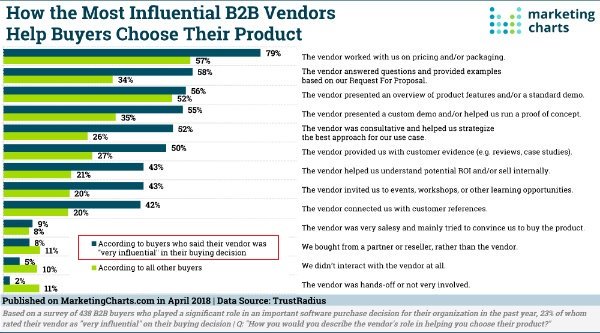 One of the key conclusions in the study was that “buyers are more influenced by vendors who are transparent and trustworthy.”  Specifically, it found, “23% of buyers said the vendors they bought from were very influential.”

The report found those vendors “engaged with their buyers differently than the rest.” It suggests that vendors who interact with buyers transparently tend to have greater influence. Indeed, the study found, “highly influential vendors were more open, honest and responsive.”

This is so important to marketing because many vendors want to be influential, but they want it to happen fast and without too much effort and the world just doesn’t work that way. It doesn’t work on a personal level, and it certainly won’t as an organization.

Too much of what marketing does is focused on the short-term – stunts, tricks, and discounts – to influence the numbers at the expense of the long term. In an unrelated, but entirely relevant interview with John Wall for the Marketing Over Coffee podcast, Rand Fishkin describes a better approach to marketing as a flywheel.

He said it takes time and energy to get a flywheel spinning, but once it’s spinning, it requires very little energy to maintain and opens up the opportunity for new gains.

For its part, the TrustRadius report makes three recommendations in this area: 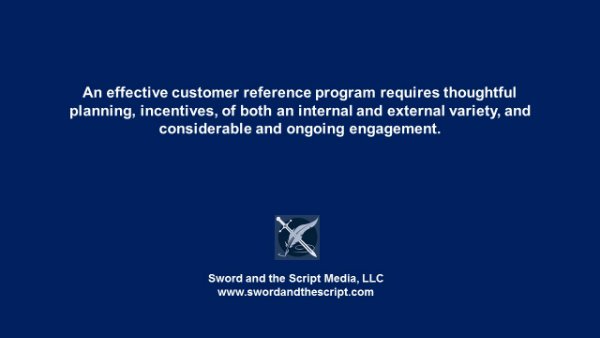 Despite being happy with a product, “less than a quarter of buyers have served as a customer reference, provided a testimonial, or participated in a case study for the vendor they bought from,” according to the report. The survey says “84% are willing to do more, but vendors need to ask.”

This problem is further compounded in B2B organizations with an account executive (AE) based sales model — and the division between the hunting and farming aspects of sales. An AE responsible for retention and upselling is disinclined to spend a chip for an analyst meeting or media interview because… they might need to call it in at the end of the year to make their own numbers.

Sales leaders will apply some pressure, but usually, it’s perfunctory, such as the casual, “hey everyone, marketing is looking for references for that marketing thingy.” These leaders are busy too and don’t want to pressure their star performers with the primo accounts. As long as they have their sales reference, everything is copasetic.

So, what happens? It evolves into one part of the classic sales-marketing alignment conundrum. Sales complains about marketing over a low volume or low quality of leads. Marketing, in turn, complains about sales for slow or poor follow up – and the references get caught in the middle.

I’ve seen it a million times and in organizations of all sizes – startups, midmarket and the global corporations. This is a natural part of maturation for startups, and it’s often a recurring event in large companies because the constant re-organization often shuffles leadership and responsibilities. Sometimes this leads to a kumbaya meeting but it’s often hard and stressful getting there.

I have three foundational recommendations here:

a) Sales should recognize references are for the greater good of the organization. It should also realize it’s in their best interest for marketing to hear directly from customers because that education will be reflected in future content and marketing programming.

b) Marketing should recognize it’s hard for sales to ask for references amid the pressure for sales. In addition, building customer references requires the same time and patience we ask for sales to have with strategic marketing programs (also see: How to Generate Media Referenceable B2B Customers with a Blog).

c) Leadership should recognize that an effective customer reference program requires thoughtful planning, incentives, of both an internal and external variety, and considerable and ongoing engagement. It’s not something you can just delegate and forget. Are customer references on your executive dashboard? Probably not…but maybe it’s a metric that belongs there.

Trust is both a flywheel in marketing and key point of differentiation. The full report – The 2018 B2B Buying Disconnect – is worth a read and is available for download with registration.

In addition, here are some additional sources with reporting or analysis of the report:

Looking for an agency partner that can both bring ideas and execute on them?
Give our services a try.  Talk with us!

The idea behind long-term investing is straightforward:  put a percentage of your earnings aside consistently over time and leave it...