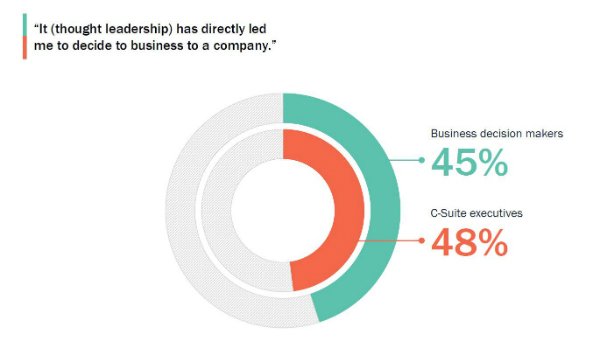 Marketing may be underestimating the impact of thought leadership on sales, according to a comprehensive study published in June 2017 by Edelman and LinkedIn.

While marketers typically associate thought leadership with the awareness stage of the buyer’s journey, the survey shows the influence lasts through sales closure and perhaps beyond.  The study concluded thought leadership “attracts invitations to bid (RFPs), earns buyer preference by building trust, directly contributes to wins, and can even impact pricing.”

The conclusion is derived from a survey the two companies fielded to 1,300 business-to-business (B2B) professionals on LinkedIn with titles ranging from manager to CEO.

The findings included the following:

It’s worth pointing out that 14% of respondents hold C-Suite titles, and the study breaks out statistics (including a margin of error) for both all respondents and by C-Suite segment. These track fairly closely in response for most questions.

For example, 90% of the C-Suite believe thought leadership is important and 16% say they spend 4 or more hours per week with such content.

Don’t miss these related posts:
Thought Leadership Actually Requires Thought and Leadership
Where and How B2B Marketing Generates Leads it Likes [Study]
What Does It Take to Implement Content Marketing Effectively in B2B?

The study does well to point out that even high-quality thought leadership content rarely moves on its own accord.  Thought leading content often has several triggers including relevancy, trust and comprehensibility.  The study breaks these triggers into two categories:  sources and content.

Sources respondents cited included thought leadership pieces passed along by people they “know and respect” (84%), a boss (68%), or from a source to which they’ve already opted-in to received (67%).

In terms of content, respondents said they gravitate towards thought leadership that’s related to “something I’m currently working on” (63%) and “is short and easily absorbed” (53%).

There are several important lessons this data about triggers brings to light:

Respondents noted they will entertain thought leadership from brands to which they’ve already opted in to receive content.  This underscores how important trust is in the processes of turning traffic into subscribers, and subscribers into customers.

While thought leadership done well can certainly grow brand subscriptions, it’s also more likely to go a whole lot further when a brand has already been growing that base. Like compound interest in finance, much of marketing is cumulative.

It’s reasonable to believe that when a supervisor sends a link to content to a subordinate they’ll read, or otherwise engage it.  What’s especially telling though is that respondents were – by a delta of 17% – more likely to read content forwarded from people they “know and respect” than they were a boss!

There’s an opportunity to influence the influencers and those people aren’t always in the reporting chain.   More than once I’ve seen solid thought leadership content languish unread until it’s discovered by an influential blogger with a small but tight link to a niche community.  Then it spreads like a virus.

This also works the other way around in crisis communications.

The report cites “short and easily absorbed” content formats but these two aspects are not mutually exclusive.  For example, a long, but well-written report can be more easily absorbed than a short one written poorly.  This idea of “snackable content” has infected the minds of marketers for many years to the extent they exclusively focus on short form.

Similarly, brands should avoid writing more words simply to create long form content. I’ve personally noticed a trend where businesses are publishing longer pieces where a short form would be more easily absorbed. How long should a blog post be?  The answer is as long as required to communicate an idea effectively.

This idea of absorption also extends to visuals, like graphics.  I recently read a market research report by a professional analyst firm that used pie charts, where bar charts would have made more sense.  With apologies to the creatives and graphic designers, it doesn’t have to be pretty, but it does have to be understandable.

It’s very tempting for a B2B marketing leader to glance at a report like this can set out to buy thought leadership at a discount by the pound.  There is, however, a cautionary tale:

“Poorly executed, however, thought leadership becomes a double-edged sword that not only damages credibility but may remove your firm from consideration by potential customers.”

In fact, 45% of respondents said they “lost respect and admiration” for organizations that tried to pass off sloppy or poorly conceived work as thought leadership.  The C-Suite were even less forgiving with 53% saying as much.  About one-third (30%) of all respondents said they “have removed companies from consideration after engaging with what they viewed as poor thought leadership content.”

“Free deliverables that organizations or individuals produce on a topic that they know a lot about, and they feel others can benefit from having their perspective on. Thought leadership, in this context, does not include content primarily focused on describing an organization’s products or services.”

The report closes with several recommendations, one of which my experience tells me is the hinge for the entire concept in B2B marketing:  While it may seem counterinitiative, thought leadership that sells best focuses on delivering value rather than trying to sell.

The full report is available on the Edelman website – How Thought Leadership Impacts B2B Demand Generation – and freely available on SlideShare.

Diversity, Politics and MBAs in the Business of PR; Off Script #20: James S. Walker

There’s a quote often attributed to Peter Drucker that says culture eats strategy for breakfast.  Maybe he said it, and...