Home > PR > Selfish Altruism: Ned Lundquist on Origins of the JOTW and an Appeal to Take the Annual Comms Survey 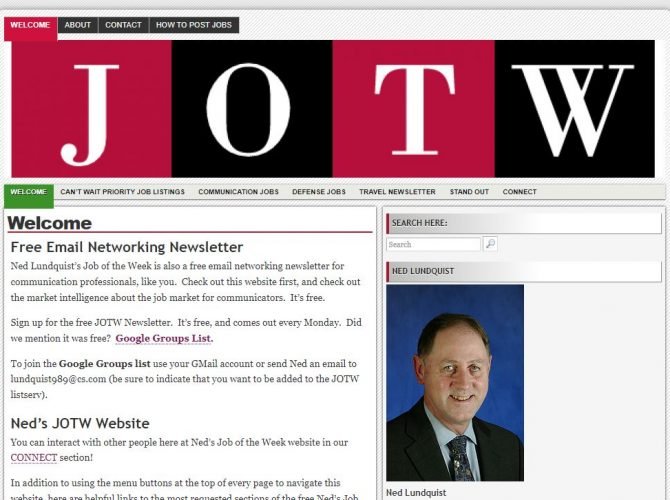 It seemed like any ordinary day in August of 2002.

I rode the WMATA bus down Wisconsin Avenue. It was still early morning, but the August heat of Washington, DC, was already on high.

It was a nascent consulting firm I had joined just four months earlier as the second or third employee (I can’t remember which). My previous employer had sold a mid-sized PR firm, her husband had started this business, and recruited me to join.

The economy wasn’t good and while the acquiring firm was laying people off, my utilization rate was such that I knew I was safe there – but it would be risky to leave. Still, I thought this was my ticket to get in early, work hard and earn a little payout when he sold that firm in a few years. No risk, no reward, right?

It wasn’t PR, but I like the work and I thought consulting might open up new opportunities. Things seemed to be going well. We had just finished an $80,000 consulting project with the government and were on the hunt for our next gig.

I got off the bus at my stop in Georgetown, walked to the office, and immediately sensed something was off. My boss, the business owner, ushered me into his office. He said you might have noticed your colleague isn’t here. That’s because I laid him off and I’m laying you off too.

It was a shock of course. But me being me, I went right to work looking for another gig and finding some freelance work to pay the bills. That’s when I discovered Ned’s Job of the Week email newsletter. I was filled with job opportunities every week and would occasionally feature a job seeker in a section of the newsletter called the One Paragraph Pitch (OPP).

I didn’t know Ned at the time, but I pitched an OPP and he ran it. I was elated. It was a huge mental boost — and if you’ve ever been laid off — you know how meaningful that is.

He’s really done wonderful service for the communications field and has built a 6,000-person strong community in the process.

Nearly two decades later, Ned and I would team up to survey his subscribers for the annual JOTW Communications survey. Now in its fifth year, the survey is open to respondents. In part to promote the survey, and to solicit respondents, I sent Ned a few questions about the origins of the JOTW and the survey. His answers follow below.

>>> Do you work in communications, PR, public affairs, marcom, or a related field? If so, please consider taking the 5th Annual JOTW Strategic Communications Survey for 2022.

Q1. Why did you start the JOTW and where did the idea come from?

Ned: I started JOTW when I found myself rather suddenly out of work in January of 2001. I knew some people who always seemed to have some job leads to share, and I realized that they had awareness of those opportunities because others shared with them. Those people were the center of a network.

I would share every job opportunity that I came across, and in turn, I asked people to share what they might have with me. I started with 34 people and sent out a weekly email.  I called it the “Job of the Week.”

It immediately generated responses from my newly formed network, and two of those responses led to job offers, with one of these leading to my getting hired for a corporate VP job.

Meanwhile, I continued to share, and the JOTW network continued to grow.  The newsletter was free, and news of JOTW spread by “word of mouse.”

Once again my network came through, and I followed up on one lead that lead to two job offers for the same job from two different government contractors. I took the one that paid more, but that company lost the contract to the one that was going to pay me less (there’s a lesson learned there). I worked for that defense contractor for 20 years (although the companies changed hands several times).

Now I have my own company.  But the JOTW network still exists, with more than 5,900 subscribers, and the newsletter continues to share dozens of fresh job leads every week. I haven’t changed everyone’s life, but I have made more than a difference for many of them.

I call it selfish altruism.

Q2. Are there any interesting stories over the years about – job seekers matched to employers – that happened because of the JOTW?

Ned: There are lots of stories about people who connected with an employer and went to work.  But quite often I’ll hear about those stories second hand, which is disappointing because I crave the feedback. I have had people stand up in a large group and say that JOTW changed their life, and that means a lot to me.  I’ve also had employers tell me that they got piles of qualified resumes after running a listing in JOTW.

I once had the head of IT at IABC tell me that they signed up so many new members because of announcements I posted in JOTW that it equaled a medium-sized chapter.

My son’s Eagle Scout service project included a book drive (along with school supplies and porting goods) for the Standing Rock Sioux Reservation in Fort Yates, North Dakota.  The superintendent of schools had a list of books he was especially interested in acquiring.  I shared that list with the JOTW community, and something like 90 books were ordered from that wish list and sent to Fort Yates, shoring the power of the JOTW community.

Q3. Why should comms people answer this survey?

Ned: I could make up some snarky comment like, “You guys owe me.”  But really the answer is the JOTW community represents a smart and experienced group of communication professionals, and the profession should want to know what we think about the state of the profession and the industry.  The survey results have proven useful in indicating real trends, and the professional and trade press have taken note of our findings.  Obviously, those findings mean more with a higher number of respondents—it gives our results more weight.  Which is why we want you to complete the survey.  Do it for yourself.  Do it for the profession.  Do it for Frank and me.  But please do it.

“It is one of the most beautiful compensations of this life that no man can sincerely try to help another without helping himself.”

If you’d like to see the results of previous surveys, you can find them on SlideShare:  2018 edition, 2019 edition, 2020 edition and 2021 edition. And you can find 30 or so blog posts I’ve written about the survey results over the years all neatly categorized under the blog tag JOTW.

PS: if you haven’t taken the survey yet, please do so soon. The average respondent completes the survey in 9 minutes. Begin the survey here. 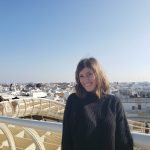 Deals in B2B are increasingly complicated and more likely to be scrutinized by top executives and the finance department “Buyers...