Understanding the unique characteristics of owned, shared, earned and paid media helps marketing and communications professionals consider how to weave these together to best execute an overall strategy

A couple years ago, a startup founder and CEO approached me about PR and marketing consulting services. Although he had worked for an impressive pedigree of tech brand before starting his company and raising venture funding, I quickly picked up on the fact he didn’t understand the differences between media classes.

I don’t blame him, the education of marketing in the U.S. largely centers around advertising. The major trade publications are AdAge and Adweek, as opposed to Marketing Age or Marketing Week (which is a title in the U.K.).

So, this post is intended to make a small improvement and describe the basic benefits and drawbacks of owned, shared, earned, and paid media. 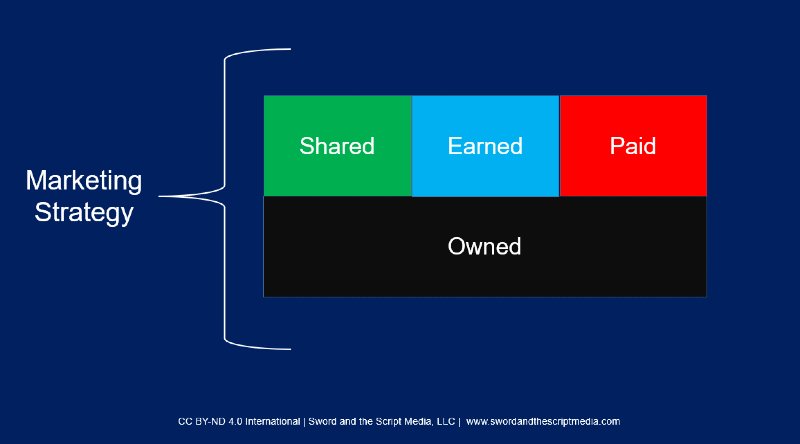 What it is: Owned media is any media property, website or publication that you own.

Benefits: You have complete control over the content including the quality, timing, context, and presentation.

Drawbacks: It’s a grind to produce content worth consuming consistently – and consistency is a requirement. Reach is a challenge if you don’t have an audience – and building one is hard.

Pro tip: If you publish a blog, burn an RSS feed and hook to up to a third-party email tool like MailChimp or Mad Mimi to automatically deliver email new posts. You can also set up a subscription form to build an audience. Many aggregators still use RSS to round up content so it’s extra distribution at no cost.

What it is: Shared media typically refers to social media, but it can also include discussion forums, wiki pages and other mediums that rely on user generated content. The common denominator is that these sites don’t create content but provide the means for users to publish content they have created.

Benefits: These sites attract an audience of their own, so assuming your target market is on a given site, it’s a chance to connect with the right people. If you successfully build a following, it can be a great way to engage with a community and share ideas.

Drawbacks: Building a following is hard work. These sites can be noisy which makes it hard to stand out. The context in which your content appears can impact brand safety. The algorithms that managed distribution are secret and prone to change. The site can remove your account for any reason – and if you’ve spent years growing a following it can be all gone in a flash.

Pro tip: Social media sites want to keep people on their pages, so they typically devalue links to content off site. Be sure to think about sharing ideas that aren’t just links to blog posts, for example. In addition, don’t just share your own stuff. Be sure to listen, engage and generally be a cheerleader for your industry.

What it is: Earned media describes coverage from a third party. Traditionally, this was from news site, but today blogs and influencer posts are widely considered earned media – and are hard earned. I also consider a backlink as a “mention” even if a person or brand is not explicitly mentioned. Backlinks are powerful validation with the potential to improve long term search results. Some consider social media shares as earned media, but I believe that stretches the term beyond a useful boundary.

Benefits: Earned media potentially has more credibility – there’s nothing you can say about yourself that’s as powerful as someone else saying it about you.

Drawbacks: You may not be happy with tone or context of the coverage. You have very little control over the content, especially after its published. Asking for corrections can become adversarial.

Pro tip: Promote your coverage when you earn it. Share in the company Slack. Post it to your newsroom. Have sales email a link to prospects. Buy reprints and hand them out at a trade show. What you do with a mention in the media is every bit as important as getting it in the first place.

What it is: Paid media is when you purchase space or distribution from an established brand with a media asset known to your target market.

Benefits: This is a ready-made audience often with detailed demographics. You have complete control over the message – and a lot of control over the timing and context. Digital forms of advertising often have detailed and granular targeting options.

Drawbacks: Advertising is expensive. It requires consistency, frequency and variety to work. Advertising doesn’t have the same level of credibility as earned media – but I would argue that it’s not zero. There is some prestige to advertising in large brands, or events, like the Super Bowl.

Pro tip: Paid media can drive earned media, for example, paid social ads can be a passive way to earn media coverage. General Electric amplified its media coverage by buying all of the print ad inventory in The New York Times to announce its break up and spinoffs. Executives made an event out of it too by fielding a watch party to see the printed papers run off the press. Finally, an intentionally controversial ad can also fuel word-of-mouth exposure and coverage.

While each form of media has benefits and drawbacks, this post isn’t about which one is better. Instead, understanding the unique characteristics of a given medium helps marketing and communications professionals consider how to weave these together.

Image created with DALLE-2, “a painting by Picasso of an advertisement in Times Square.”

If you are striving to build your short list of PR and communications technology vendors, this long but neatly organized...