Home > PR > Changing Relations with Business and Media: Summaries to 3 Studies for Communicators

Changing Relations with Business and Media: Summaries to 3 Studies for Communicators 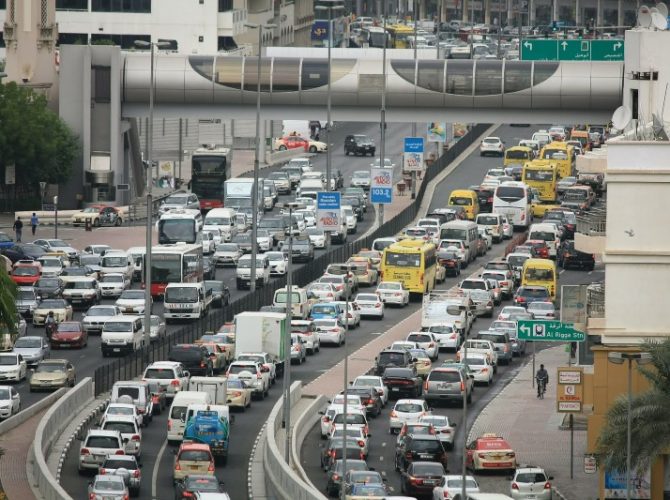 One study shows communicators are faced with growing workloads, but their relationship with business has strengthened; two studies offer a look at media relations insights

There’s a lot of talk lately about getting back to normal and while things are headed in that direction, I think we’ve also got to recognize some things have changed permanently.

Figuring out which is which – is the challenge. That’s true across every business function and vertical. For communicators, there’s have been a handful of studies published that will help you think it through.

The Coronavirus pandemic has left communications teams with more work but also stronger business relationships. That’s according to a survey of 750 communicators tallied up in the 2021 Communications Benchmark Report by Ragan Communications.

When asked how COVID-19 affected the communications department, nearly 8 in ten (79%) respondents said they felt an increased workload. Additionally, 42% said the comms shop had strengthened relationships with other departments – and about a quarter (26%) said they gained a seat at the strategic table and one in five (21%) said they had better access to the CEO.

According to a survey, comms professionals gave themselves good grades. About half (52%) “rate their efforts as above average or excellent, an 11 percentage-point gain from last year.” This mirrors the sentiment in a separate survey that quantified a self-assessment by CMOs.

“Fifty-three percent of journalists receive more than 50 pitches a week, and 28% receive more than 100 per week. Yet most journalists (69%) say only a quarter (or less) of the pitches they receive are relevant to their audiences.” That’s according to the 12th annual State of the Media Report by Cision, which surveyed 2,700 journalists in 15 countries.

It also showed that reporters are as busy as ever: nearly half (47%) strive to cover as many as five different beats and 45% file seven or more stories per week. Think about how much work that is: try writing a blog post every day – then add two more.

Reporters also becoming more analytical about their editorial decisions: 59% percent of reporters indicated that detailed audience metrics – like page views, engagements and demographic data – have changed how they consider stories to write.

Some of the story angles they are looking for this year include:

There was one other nugget that stood out for me in the report: 60% of reporters that responded to the survey said they prefer receiving pitches on Monday – which defies conventional wisdom.

A separate survey I wrote about earlier this year by Muck Rack had some interesting findings about journalists and their use of social media for reporting. 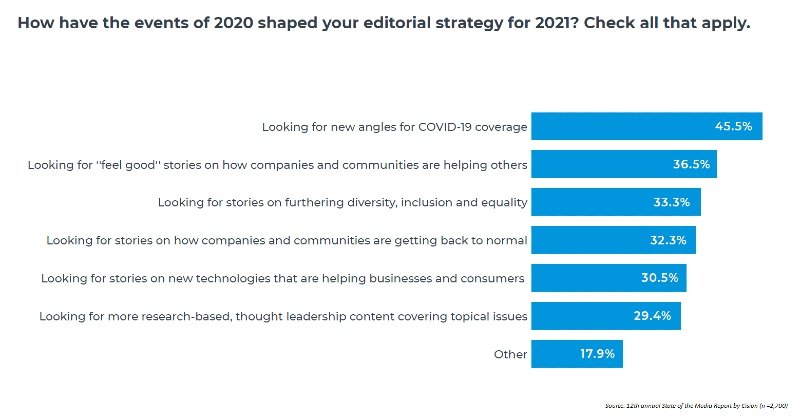 In a previous post, I briefly mentioned an analysis of 650,000 pitches, sent between March 2020 until March 2021, by the PR tech startup Propel. It found that Forbes, Business Insider and The Wall Street Journal are the most pitched publications in the U.S.

That’s no surprise, but I circled back to look at some of the other findings of the study, which included the email open rates for pitches sent to some publications.

Here are the email open rates for pitches sent to these publications.

This meshes with my own experience. I’ve often found that good story pitches to reporters working at top-tier outlets will get a fair look. There are a lot of factors that go into a decision to cover a story, however, as the response rates show.

Propel looked at categories of pitches – sent to media publications of all tiers – and you can see the open rates fall and the response rates are low. For example, if you look at the technology and computing category, just about one in three pitches are read (34%) and just 4% get a response.

The study doesn’t say this, but if you’re pitching stories that aren’t news from a reporter’s point-of-view, you’ll see your open rates fall off too. 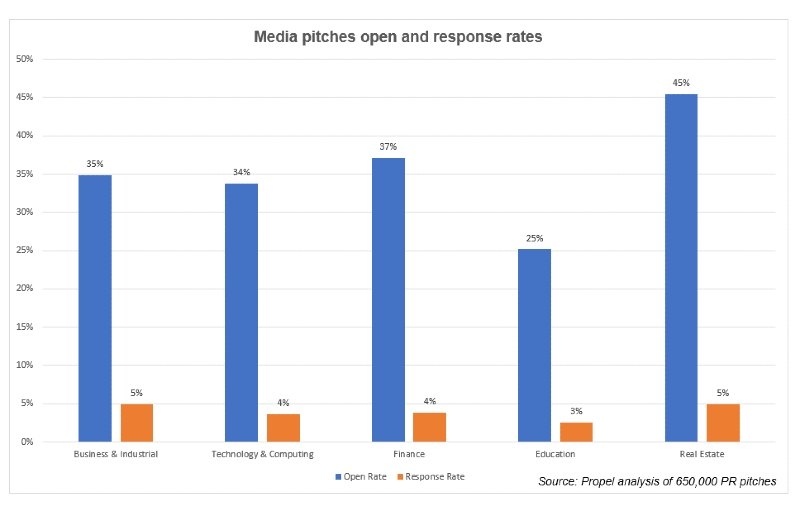 Image credits: respective surveys; I made the chart listed with the Propel study based on their data

Marketing and PR require considerable time to educate executives that aren’t digitally savvy; if we can keep our frustrations in...