Home > Popular Posts > How 2,400 Journalists Use Social Media for Reporting [And Why PR Should Get Serious about Social] 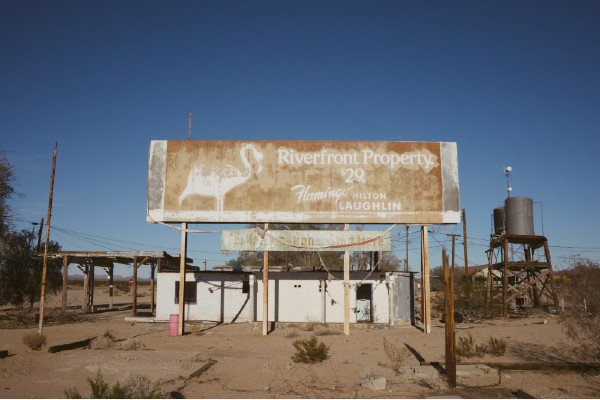 Journalists say Twitter is the most valuable social media platform and they spend a lot of time there; if you want to improve media relations you should invest more time there too

The first flavor rarely uses their social channels. These branded social accounts look something akin to a ragged and outdated billboard on a desolate highway that hasn’t been updated in years.

There are all sorts of reasons this happens and some of them might even be valid. However, if PR is part of your communications or marketing strategy, then those businesses are missing an opportunity to tap social media for better exposure.

6 Statistics on How Journalists use Social Media

Muck Rack teamed up with about 20 different associations – i.e. Society of Professional Journalists, MediaBistro, Foreign Press Association – to survey 2,482 journalists from January 11th to February 8th of 2021. Some of the findings around social media stood out:

When asked where reporters go to get their news the top answers were online news (58%) and said Twitter (16%). While Twitter was a distant second place, it’s also a long way from the third place which was cable or TV news (7%).

It was also interesting to see that just 3% of reporters said they get their news from newsletters and just 1% from podcasts. This runs counter to current trends among the general public – but that’s a different blog post. 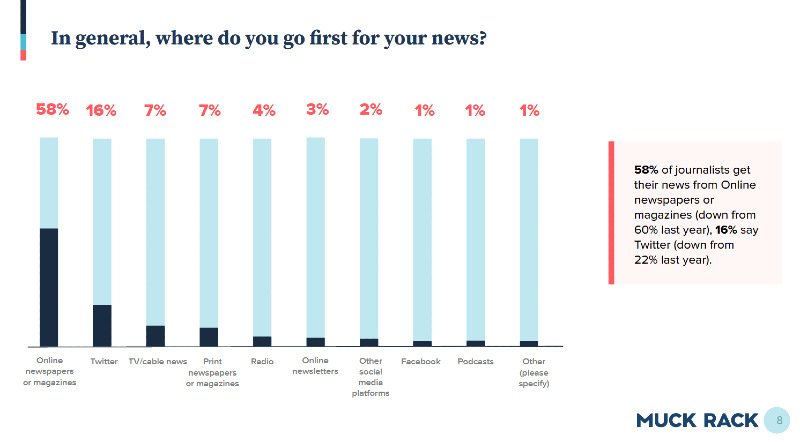 About three-quarters (73%) of journalists that responded to this survey cited Twitter as the most valuable social network. That’s down a bit from the same survey last year, however, it’s still nearly double the number of votes awarded to the next closest platform, Facebook, with 38%. 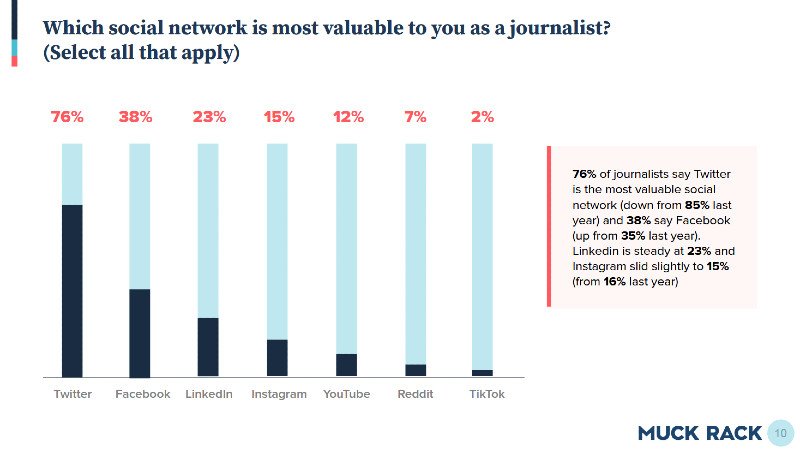 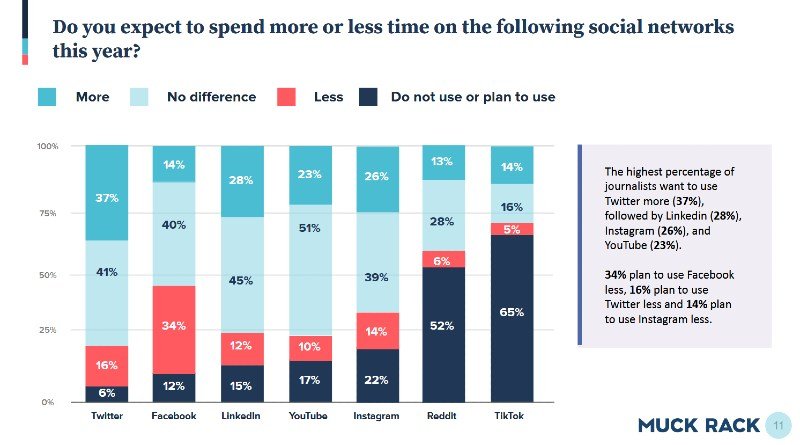 When reporting on a company, 86% of reporters say they consult the company’s social media channels at least some of the time. Further 58% “usually” or “always” check those sites in the course of developing coverage. 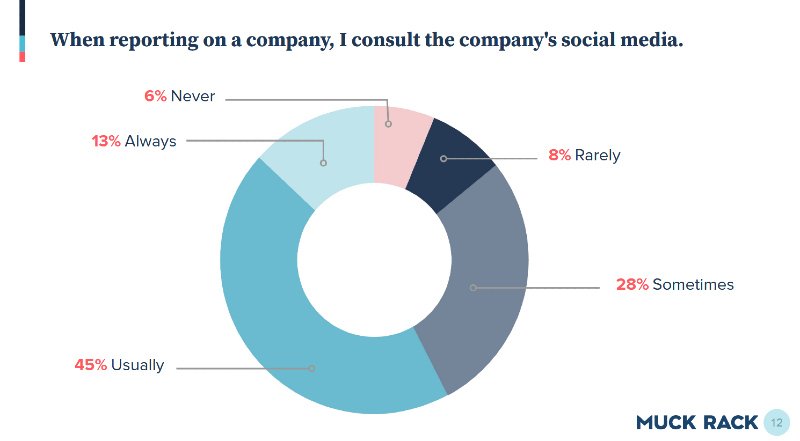 One of the biggest changes in the media in my lifetime is self-promotion on social media. In the early days, around 2009, I saw many reporters struggled with this and disliked it.

Today, it’s almost just expected that reporters will promote their work, and some have grown to enjoy it (which is human) and even developed considerable followings of their own. According to this survey, 62% track how many times their stories have been shared on social media. 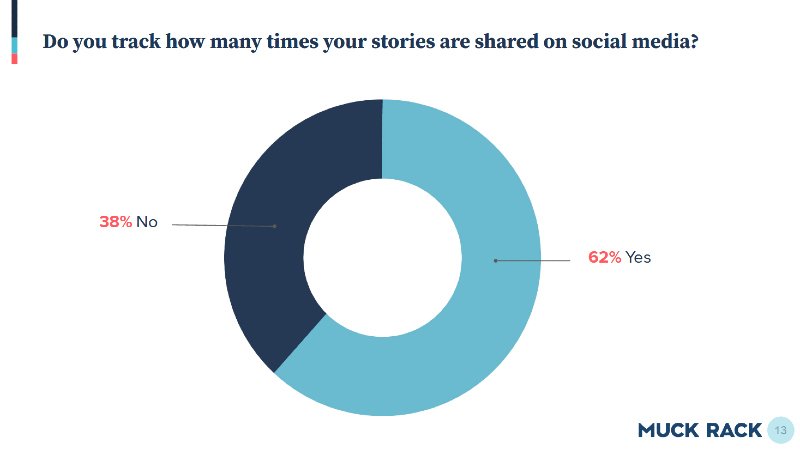 6. Most reporters are not receptive to pitches on Twitter

The vast majority of journalists (94%) responding to this survey prefer pitches by old-fashioned email. Just 12% say they are open to receiving pitches on Twitter – and those that do typically make that clear in their Twitter biographies. 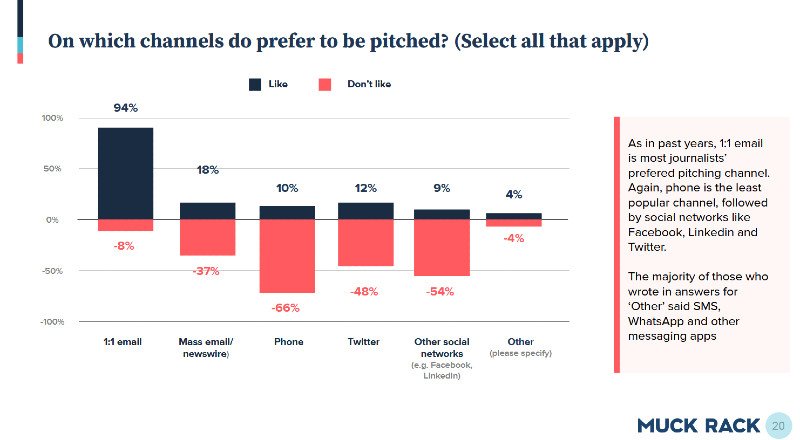 While most don’t want to be pitched on social media, it’s clear, in aggregate, that social media, especially Twitter is important to overall media relations efforts. Indeed, as I’ve said before, if you work in PR and have responsibility for media relations, then you have in a sense, a professional obligation to be on Twitter.

Here are a few tips for making the most of it:

The full report covers much more than just how journalists use social media. A copy is freely available for download with registration here: The State of Journalism 2021.

Image credits: Photo by chase.wilson.photo on Unsplash and the cited Muck Rack study

Strategic marketing initiatives like brand building are back in style because the pandemic and politics have put trust top-of-mind; zero-click...