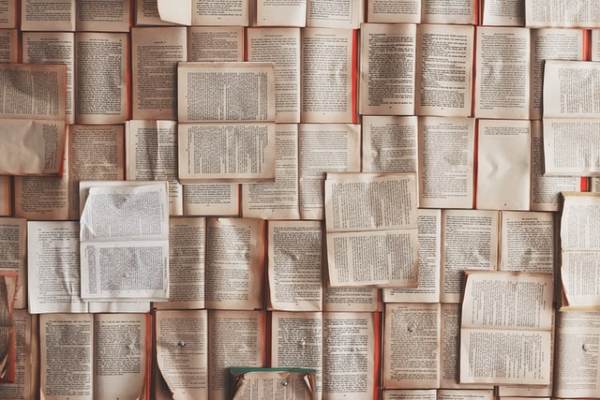 There are unpolished phrases the marketing community kicks around to describe the outsized role content marketing has in the sales cycle.

Spiceworks is a niche forum and social network for the IT community which has been the source for a range of reports the company has published over several years. Spiceworks was acquired by Ziff Davis, a publisher of technology publications including Mashable, PC Magazine, MarTech Advisor and HR Technologist.

What types of content are B2B tech prospects engaging?

Webinars draw the most interaction by far, according to respondents. Those are followed by several categories of content that draw similar interaction rates. 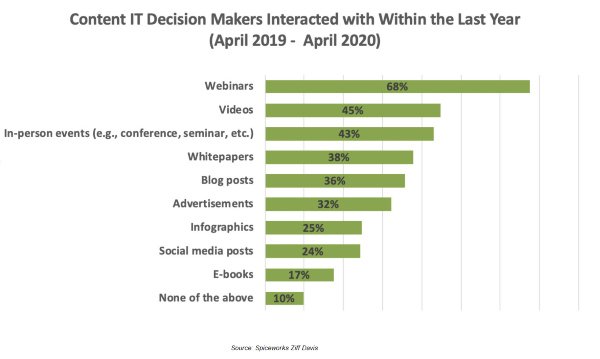 It’s also worth pointing out that one in 10 say they don’t consume any vendor content at all. I can’t imagine spending a quarter-million dollars on software without bothering to see what the vendor has to say for themselves first.

The volume of content decision-makers consume has continued to grow every year. From time to time, I see skepticism about such figures. There are only 24 hours in the day, and people have only time for so much, or so the goes one argument.

But it can and continues to rise.

Marketing in B2B tech is unique because these are typically complex products and involving multiple stakeholders and a long sales cycle. Content has never been more accessible, and it’s reasonable for a buyer about to commit to a high-value SaaS subscription, to take their time in coming to a decision.

Another argument that I find interesting, is the idea that this content consumption is coming after the purchase. In other words, consuming content is a way to rationalize a purchase and validate that you made the right decision. Like content aimed at customer loyalty and retention, this is a category of content worth adding to your mix.

Fifty pieces of content seems like a lot at first pass, but it’s not when you consider the approach. The prospect that subscribes to a blog, and makes a purchase a year later, will have easily received 50 pieces of content if you are publishing content consistently.

The big mistake too many marketers commit in content is missing the subscription. They think of themselves as marketers of content – chaffing for a conversation – instead of publishers of content that is developing an audience of likely buyers. Yet the latter is much better suited to the consultative sales cycle many B2B tech companies espouse to employ.

It works too. A few years ago, I championed a corporate blog that was a measurable touchpoint on the sales cycle for about one-third of deals closed for a SaaS product with an ASP of $1.3 million. That analysis came about by comparing the email addresses associated with deals closed with their origin among potential marketing touchpoints.

If you use any of the major marketing automation tools, you can gather your own data with a little analysis. Look to see how many touches were involved and role content played in the deals you closed.

Pieces of content. It’s a terrible term, but an important one.

Surveys show earned media is still the most credible; exec appreciation and collaboration with PR improved during the Coronavirus Regular...