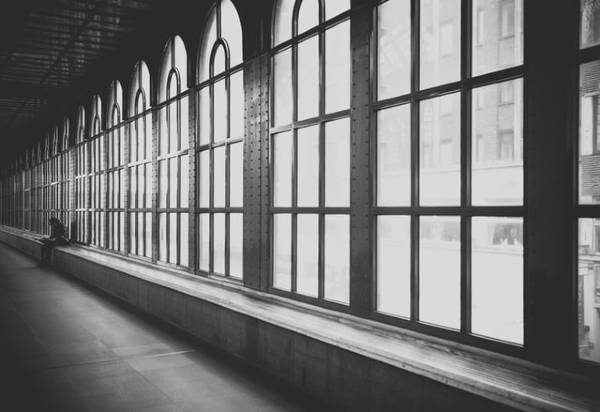 Of all the media relations insights the best one is this: be relevant. These three studies polled 4,000 journalists and their answers all center on relevance.

I’d do a considerable amount of blogging. Occasionally, I’ll use the service Help a Reporter Out (HARO) to field responses for a blog post.

Typically, these are softball pieces that in many ways serve the interests of my peers in PR. However, they do take time to compile, and so my requests are precise.

It’s an easy mention, but you’ve got to provide it the way I want it. It’s not ego, it’s efficient.

This stuff isn’t hard, and while I’m not a reporter, an exercise like this is a glimpse into their world. The vast majority of media relations hinges on relevancy.

And that’s the theme for this week’s Unscripted Marketing Links [UML]. The UML is an occasional roundup of three related ideas that have been vetted, wrapped in insight, and presented here for your perusal.

>>> More than a proactive PR partner: an extension of your team. Try our services.

Muck Rack is back with its annual survey of journalists. The company said it polled more than 1,000 journalists for the 2020 edition (cliff notes to the 2019 edition here). About 65% of journalists that responded this year are based in the U.S. The rest are from around the world.

Here are a few of the stats that stood out for me:

1) On “relationships” with PR. 64% of journalists describe their relationship with PR as “mutually beneficial, but not quite a partnership”; 15% call it “a necessary evil”; 14% say “antagonistic, but not inherently a bad thing”; and 7% call it a “partnership.”

3) Best medium for PR pitches. 93% of journalists want pitches by emails; 69% do not want phone calls; this has been fairly constant for years now.

4) How long should pitches be? Most journalists (62%) say pitches are best at about 2-3 paragraphs long; still, about one-third prefer them pithier – just 2-3 sentences.

5) Best day and time to pitch. 62% of journalists had no-preference on the “best day to pitch”; although 20% said Monday and 10% said Tuesday; however, morning is still best as “64% prefer to be pitched before noon.”

6) Why PR pitches are rejected. The answers varied but they are all related: 33% of journalists reject a PR pitch that lacks personalization; 31% cited bad timing; 18% delete them if they are too lengthy; and 15% reject pitches with a confusing subject line.

7) Should you follow up? It seems you should: 55% of journalists said one follow up was okay and 27% said two email follow-ups are okay; most tap out on the third attempt; about half of journalists (51%) say PR should wait 3-7 days before following up.

The full report is a quick and easy read: The State of Journalism 2020 by Muck Rack 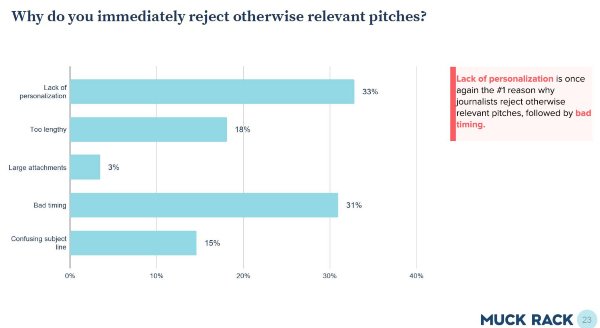 b) Survey of 3,253 journalists by Cision

Cision also has an annual survey of journalists, which they use to produce a report called the State of the Media (here are my notes from editions in 2019, 2018 and 2017).

Here’s what jumped out at me:

11) PR pitches lack relevance. Just 1% of journalists say 75-100% of pitches are relevant. That means the vast majority of pitches they receive are not useful, which makes everyone’s job harder.

12) There’s a need for good pitches. Cision says many journalists responding to this survey indicated they produce “10+ pieces a week.” Think about how much work that is – if you as a PR professional had to write 10 press releases or 10 blog posts per week.

14) Best day and time to pitch. A little more than 30% of journalists in this survey said they prefer to receive pitches on Monday; just under 20% said Tuesday; about 15% said Wednesday or Thursday; about 12% said on Friday; a small handful indicated weekend pitches were okay. Respondents did not have the option to choose “no preference” on this question, a Cision representative confirmed by email.

The full report is fairly dense and covers a lot of ground including trust in news, media bias, and the top challenges facing journalists: 2020 Global State of the Media Report by Cision.

Innowire Advisory, a small PR firm based in San Diego, surveyed reporters for a piece in The Next Web (TNW). The authors didn’t provide the sample size (the company did not respond to my inquiry by chatbot on their site, on Twitter, or my email, by publication time). However, the TNW article says most reporters cover tech (56%), business (15%), finance (9%) and science (9%).

Here’s how the company says answers from reporters tallied up:

16) How can PR help reporters? According to reporters responding to this survey, the ways PR can help are by providing insider information (62%); making connections to sources or officials (56%); providing quotes (44%); statistics (44%); press releases (32%); polls or surveys (27%) product launches and announcements (27%).

17) Are PR pitches useful? 91% of reporters said they find PR pitches are useful at least sometimes.

18) What characteristics are most valuable in a PR pitch? About three-quarters (74%) said proof of claims; 50% are looking for what makes the product or brand unique; 41% seek a personal hook or story; 41% like statistics; 35% want financial aspects.

19) What are the characteristics of PR pitches not considered? 88% cited irrelevance; 77% doubted the credibility; 67% said the pitch exaggerated claims; 62% said they were too busy for the topic; 50% had already covered a similar topic – and just 18% said it was because they didn’t know the person pitching (think about that in the context of the Muck Rack data point above on relationships).

20) Should you mention a reporter’s previous work in your pitch? About 51% of respondents said yes – the rest indicated it didn’t matter.

21) Do you accept embargoed press releases? 71% of respondents are open to embargoed releases – just 29% said no. If you use embargoes, be sure to get the reporter’s agreement before passing along embargoed material, and do not to abuse the concept.

The full article is a quick read and is less provocative than the title: What I learned about PR pitching from the reporters I keep spamming. 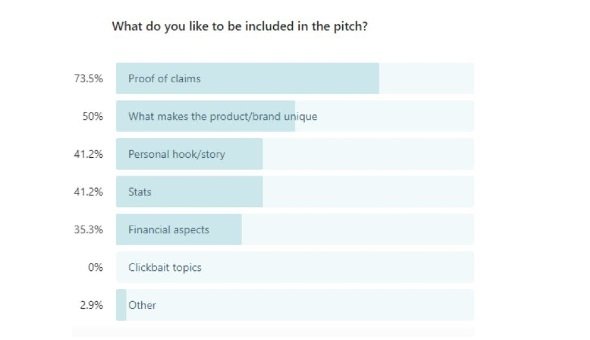 Some of these numbers demonstrate that a good pitch only competes with about 15% of a reporter’s inbox. The rest is just noise. It’s hard work, but it’s not rocket science.

Better organize your announcements and media contacts, make the "news" easy to find and stick to business etiquette; pro PR...