Over the course of the summer, a few changes to the CMO role at high profile companies have caused some to conclude the role is on its way out.

The biggest proponents of this view have been the marketing trade publications. It’s a scary headline – and fear instinctively lights up areas of the brain that kept us alive when we lived in caves.

I’m convinced these articles are mostly clickbait, but I’ve tried to keep an open mind. So, for the last three months I’ve been collecting articles and studies about this story, and today I’ve three alternate viewpoints I think are worth sharing.

And that’s the theme for this week’s Unscripted Marketing Links (UML). The UML is where on the occasional Saturday, I examine three links to credible sources that examine one topic – in this case the death (or not) of the CMO.

What’s in a name: do brands need a CMO? – Econsultancy https://t.co/reziuhIgeJ
“the complexity of marketing in the digital age means…it’s increasingly difficult for brands to find a single person who has the expertise…to handle all aspects of its marketing activities.” pic.twitter.com/oOUbAsPYn4

1) Brands are consolidating the CMO role.

I’ve combed through more than a dozen studies about CMOs over the last few years (here’s three, here’s three more, and three more, and another three more and still three more) and the general trend has been, conclusively, that the role of the CMO has grown. In other words, these marketing leaders have been commissioned with a massive amount of responsibility.

To put it bluntly, CMOs don’t need another thing to do. As eConsultancy said, the role has grown so complex, it’s hard to find a single person with the expertise to lead it all.

Against that backdrop, does it sound like a good idea to tag one person with a few more tasks? Of course, not, but that’s what’s some brands are doing according to reporting by E.J. Schultz:

“Companies are consolidating marketing duties with executives who have broader mandates that often include sales and commercial functions such as product development, retail oversight and more. This has given rise to titles like ‘chief growth officer,’ ‘chief experience officer,’ ’chief commercial officer,’ ‘chief brand officer’ and even ‘president of brands,’ the moniker Beam Suntory created in June when it opted not to fill its CMO job, which had been vacant for 10 months.”

Seems a bit backward, no? The top marketing job has grown so big and complex that right person for the job is a unicorn. Therefore, we’ll just eliminate the role and reassign marketing as an additional duty to someone else that already has an important job. That sounds to me like a recipe for bottlenecks, inefficiency and high turnover among the ranks.

The trend caused my friend Rich Young to write:

“So, if the VP is focused on solely the next 90 days to hit her number, how can she focus on marketing execution to build for the next 18 months?”

The title of Mr. Schultz’s piece is a little more provocative than the copy. It’s a fairly balanced piece and points out 70% of Fortune 500 companies maintain a CMO title.

Read more: Why more brands are ditching the CMO position in AdAge

2) Brands are modifying the CMO role.

Edward Nevraumont offers a different take on the evolution of the CMO. The role isn’t being eliminated or consolidated; it’s being modified as the business changes:

“When marketing articles wonder if ‘the CMO is obsolete,’ they usually cite the high number of companies that ‘ditched the CMO.’ Upon closer inspection, though, many of these companies simply adopted new names.”

He points out many of the headlines proclaiming the death of the CMO, are generalizations. When he examines the same anecdotal evidence purported to support those generalizations, he draws a different conclusion:

“…contrary to articles that claim CMO’s ‘very existence is coming under threat … accelerating a trend that began a few years ago,’ companies are definitely NOT jettisoning executives in charge of marketing. Instead, we’re seeing examples of an organizational restructuring that better align with the realities of the companies’ operations.”

Read more: Is the CMO role obsolete? in Marketing BS

CMOs seem to lack confidence in their own ability, but that viewpoint is largely unwarranted. Most of their peers think CMOs are doing a fine job.

That’s according to a survey by Deloitte of 575 C-suite executives and 19 interviews among the Fortune 500. The findings were summarized in an HBR article by Jennifer Veenstra, Diana O’Brien and Tim Murphy – who all hail from the consulting firm and co-authored a more in-depth report.

What do CEOs think of CMOs?

“For every metric captured, nearly 50% of CEOs think their CMOs are highly effective.”

What do CIOs and CTOs think of CMOs?

“Chief information officers and chief technology officers hold CMOs in high regard as well (although not quite as much as CEOs do); they especially appreciate marketing heads’ customer expertise. The one area in which they have a more tempered view is CMOs’ ability to initiate collaborative efforts, where CIOs and CTOs are fairly in line with CMOs’ personal views (32%).”

What about CFOs and their view of CMOs?

“Overall, chief financial officers have a relatively positive view of their CMO colleagues. However, to an even greater degree than CIOs and CTOs, CFOs desire better collaboration: Only 23% of CFOs believe that CMOs collaborate effectively – the lowest percentage of all C-suite roles.”

The two groups that seemed to “need some convincing” were chief operating officers and chief strategy officers. Candidly, anyone that works in strategy should be careful about dropping grenades on marketing, because criticizing the financial impact of strategy work is equally challenging to quantify.

All in all, this study suggests there’s some relationship building to be done – and a little work on collaboration too. However, this survey is another solid piece of evidence that CMOs are on steady ground. 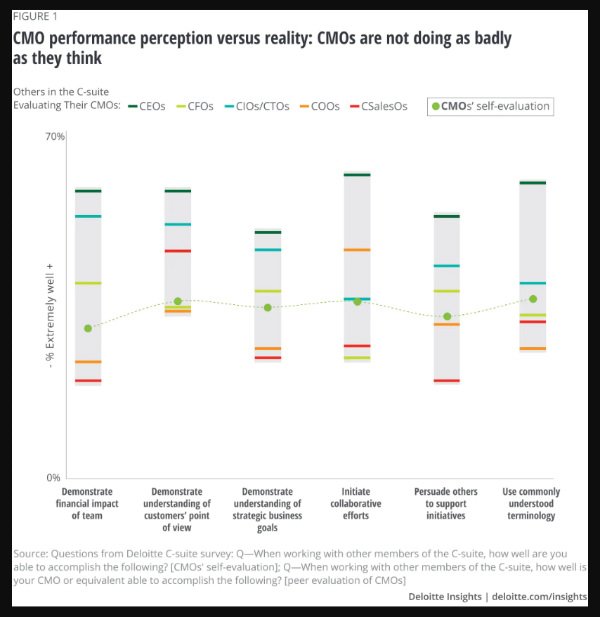 Anyone that’s been in marketing for any period of time knows the – fill-in-the-blank is dead –stories tend to make a lot of noise for short periods of time, die and re-emerge again later.

To that end, and to borrow from Mark Twain, the rumors that the CMO is dying have been greatly exaggerated. Sure, the role will evolve – every job is – but it’s not going away.

Imaged credits: Unsplash and the aforementioned study by Deloitte

Borrowed Time for the AOR and the Impact of the Big 4 on Marketing and PR Agencies; Off Script No. 43: Chris Forhan of Bytelion

Not every one that winds up in the marketing and PR space started there. Take Chris Forhan for example. After...