PR Salary 2019: What do Public Relations Salary Ranges Look Like? 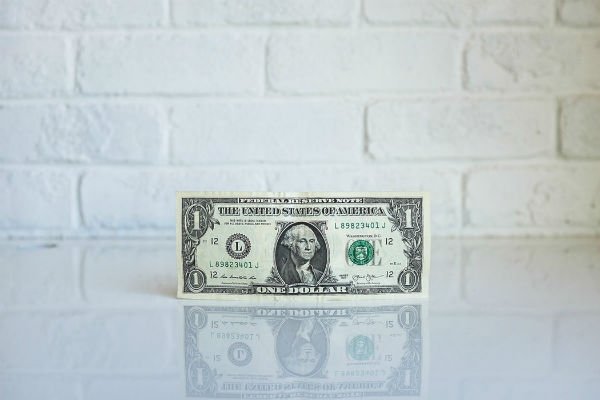 [Note: This data is from 2019 – find the most current public relations salary data].

For the last four years, I’ve reviewed the annual public relations salary survey by PRWeek. The 2019 version is soon to be released and I perused the coverage to see what was new.

Whether you are looking for a new job – or looking to fill a PR role – it is worthwhile to keep a finger on the pulse of compensation in your chosen profession.

There are important caveats you should read carefully included at the bottom of this post. In addition, there are links to my take on this survey from prior years as a reference. 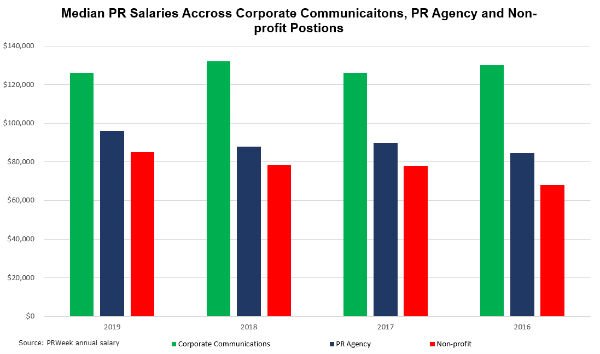 The median salary for public relations professionals in the last 12 months came in at $95,000. This is flat in comparison to the median salaries PRWeek reported* over last several years:

In the overall economy, wages haven’t kept up with inflation – a fact that’s been widely reported in economic news. Where a few years ago, the economic news narrative was a “jobless recovery” today it’s wage growth.

Typically, as the economy grows (and it has continued to grow) the unemployment rate has fallen. When that happens, wages should rise to match the demand and increased competition for new hires.

That hasn’t happened during this extended period of recovery and precisely why is a matter of debate. It’s even more confusing because businesses still complain they can’t find talent.

In my opinion, this salary survey is reflective of broader economic trends. It’ll be interesting to see if that changes in 2019 because last year, wage growth in the broader economy bounced up and down. That movement – any movement – was welcomed as positive news.

Corporate positions do tend to pay more than agency positions – and that remained true this year. The median salary breaks down across corporate, agency and non-profit sectors of PR as follows:

Here’s how PRWeek has reported* the numbers over the last several years as I’ve tracked this survey:

As you can see, the ranges have been relatively flat for the last several years. Only non-profits have seen any substantive movement in salary hashmarks.

Where you work has an impact on the amount of money you take home, so don’t get enchanted by the numbers. For example, the cost of living in San Francisco is much higher than in Philadelphia.

Here’s how the numbers break down for 2019 by geography:

Here’s a look at a handful of hot markets and they’ve changed over time:

Be careful with how you use these numbers because sampling issues start to appear when you drill down to specific geographies. For example, Atlanta probably did not experience a swing of ~$40,000 up and down over the last few years.

So, these numbers are a ballpark figure, and you should follow up with more research specific to your location. I’ve found ZipRecruiter has a dynamic site you can tailor to give you ranges, based on the listings.

Salary parity by gender has become a hot button issue in every market including PR. Here’s how the numbers stack up in the PRWeek survey:

PRWeek breaks out these numbers by over and under 5 years of experience. The breakout shows the disparity grows larger with experience

If you are an employer, then parity in compensation for commensurate work is essential – if you want to attract and retain talent. To that end, the 2019 JOTW Communications Survey, an annual study I conduct in partnership with Ned Lundquist, found high agency turnover ranks among the top 10 reasons client fire a firm.

5) Employed, but open to new opportunities

Just 12% of respondents to the PRWeek study changed roles in the last 12-months. That’s more or less on par with the figure last year, which came in at 15%.

When asked about the motivations for leaving, here’s how the result tallied:

The diversity of opinions here demonstrates that there isn’t any single reason for an employee exodus – all of these things matter. There are of course, retention strategies too. The retention tools employees cited as most important were similar to those reported last year:

I suspect the risk of employee turnover is higher than these numbers indicate. This because in the aforementioned JOTW survey found 56% of respondents were gainfully employed, but open to new opportunities. In addition, that survey also found that 47% of respondents have observed more PR work moving in-house, which may mean there will be more in-house jobs.

When you consider all of these indicators together:

…there seem to me, solid evidence to suggest the competition for talent is going grow stronger.

It’s worth mentioning here, that JOTW stands for Job of the Week. It’s a free email newsletter about jobs and openings in the world of communications. You can list your job openings, or review job openings, for free by sending it into Ned. Here’s the most recent JOTW issue as of today, which includes instructions on how to do just that.

This means when the publication says that median salaries jumped 6.7% this, that’s because they revised the numbers.

By contrast, the numbers I list here are as they were originally reported. This survey is a snapshot in time, which is diluted when the publication makes these adjustments.

In a prior year, I asked the publication about this practice. The editor told me the firm that conducts the survey on their behalf does this to make a like comparison. This concerns me for several reasons:

Broadly, I think PRWeek does the PR community a service with this survey. That’s why I write about it. This caveat section is to help PR pros understand how the presentation of data can impact the narrative.

In total, some 1,213 respondents took the survey for this 2019 report. You can read PRWeek’s own reporting here or purchase a copy of the full report for $348.

For reference, here’s my take on the survey in prior years:

Nearly half of respondents (47%) in a recent survey of public relations pros found many are observing more PR work...