Home > Marketing > Breaking Down Current Trends in Influencer Marketing: 6 Takeaways from a Global Survey by Talkwalker

Influencer marketing has been around a while, but it’s largely shuffled along as an experiment. For a savvy company with smart relationship driven marketers, there’s an opportunity to cut through a very big problem today: noise and clutter.

I define influencer marketing as paid relationship were an organization trades money for access to an association with, insight, credibility or an audience a respected industry professional has developed. For B2B organizations, it’s like combining bits of analyst relations, public relations and marketing rolled into one.

A survey by Talkwalker, which polled 823 marketing and communications professionals around the world produced an interesting take on current trends in influencer marketing. In reviewing the study through lenses of B2B marketing and PR I was left with these takeaways, that I offer for your consideration.

1) What departments are managing influencer marketing?

The survey demographics give insight into who is using influencers. By department, the numbers work out like this:

It’s smart to use communications people to manage influencer marketing because they have a skill set in managing external relationships. While most influencer marketing programs involve money trending hands, influencers are in fact still people, and as any leader knows, you get more from people that like working for you. If you treat it as more than a transaction, the influencers you work with should too. 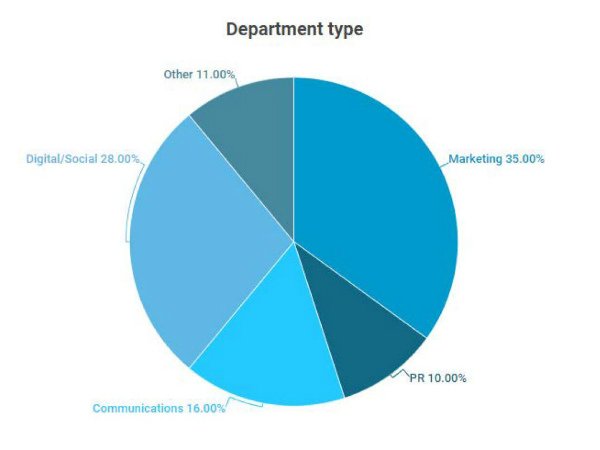 2) What types of companies are using influencers?

The Talkwalker survey put the sweet spot for company size at somewhere between 10 and 500 employees. Roughly 46% of respondents in that group use influencers. It’s a broad category but based on my experience, a company with a couple of hundred employees usually has the revenue, resources and need for influencer marketing.

It’s a chance to stand out too. The survey showed influencer marketing trails off as companies get larger. In those with more than 500 employees just about one-fifth (20%) use influencers.

Large companies are not agile – there’s a huge education hurdle in getting executives to understand what influencer marketing is – and then you have stringent procurement policies that make it almost impossible for mid-level managers to hire one. Those rules exist to eliminate risk, but they also prevent big companies from capitalizing on opportunities. If your company is looking for an edge in a market dominated by incumbents this might be one of those.

In terms of vertical segments or industries, not a single segment earned double-digits. There is just a small group across many verticals dabbling with influencers. The only segment that did earn double-digits is agencies (26%) – and that’s a problem.

Why? Brands need to have direct involvement with the influencer, rather than through a proxy, otherwise, the relationship is with the agency, not the brand. Here’s an example: if you sell stuff through Amazon, who has the relationship with the customer — you or Amazon?

Make sure your marketing leadership has time to exchange pleasantries with the influencers you’ve hired. It’ll help build support for the program and develop additional links within the company which is good for all involved. 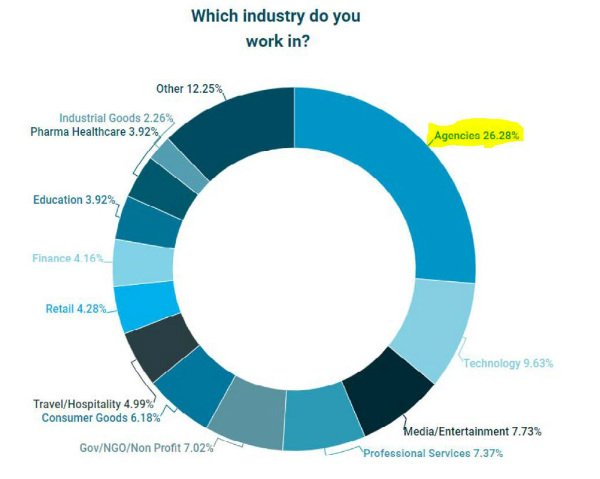 3) What are the goals of influencer marketing?

The Talkwalker survey asked respondents about the goal of their influencer marketing programs. Here’s how most of the answers tallied up:

Another 3% said “other” which the report said, “revolved around thematics such as recruitment, education, thought leadership and attempts to change brand perception.”

So, what do you have them do? Posting product pictures to Instagram might work in a consumer world, but that doesn’t work well in B2B. If you hire an influencer to solely write, tweet, or otherwise post about your company or products, you’re probably going to be disappointed. Instead find specific activities they can have a hand in shaping to share, such as:

Influencers generally are not going to sell for you – but you do want access to their credibility, audience, and the relationship they have with their audience. You’ve got to have a plan to actively promote whatever it is you are doing and get as much out of the spend as possible.

Incidentally, ROI popped as the biggest challenge in influencer marketing on a separate question, but it’s relevant here. The four bullet points, I’ve listed above support goals for both awareness and lead generation – and can be measured. 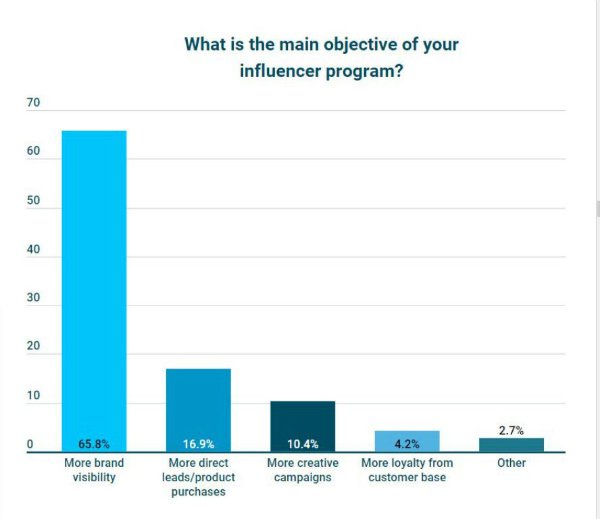 4) How do businesses select influencers?

a) Coherence of posts with brand message;
b) Quality and creativity of content;
c) Level of interactions on relevant publications (engagement);
d) Size of community and readership; and
e) Costs involved.

That’s a mouthful, so let’s break it down:

Character isn’t on the list, but in this world of brand safety and social media disasters, it’s worth bearing in mind. You also need to consider the medium and avoid becoming over-reliant.

Any social media site can kick an influencer off tomorrow, suspend their account or generally change the rules. Social media is rental property and the rent has never declined…it only goes up every year.

It’s interesting that the size of the audience ranks the bottom and there was a quote in the report along these lines, from an unnamed respondent that I found instructive:

“Having actual impact as an influencer is becoming more complex. If we take one of our topics and segment it based on size into A (large following), B (Medium), and C (Newbies), only the B tier has a noticeable impact in terms of traffic or sales. Once an influencer gets too large, they get tuned out.”

Other studies too have historically shown the influencers with the largest following, isn’t always the most influential. It’s called the magic middle.

5) How much budget are businesses putting to influencer marketing?

What’s the level of spending business make in influencer marketing? Here’s what the survey said:

I don’t know what the people with no budget are doing, but it’s not influencer marketing, so don’t let that shape your expectations. Sure, there might be some give and take, but someone that makes a living by being an authority on a topic isn’t going to do a lot for long without a check.

Analyst relations is a good cost comparison too – look at the price tag (and limitations) of bringing an analyst from a large firm in for webinar, for example. Some charge $40,000-$50,000 for a single webinar, hosted on a platform they control, and then they’ll shut off the recording after a time.

You can build out an entire program for that sum. My suggestion is to start small. Reach out to 5-6 influencers, set calls and find out what’s possible, and then do a couple of pilot tests. 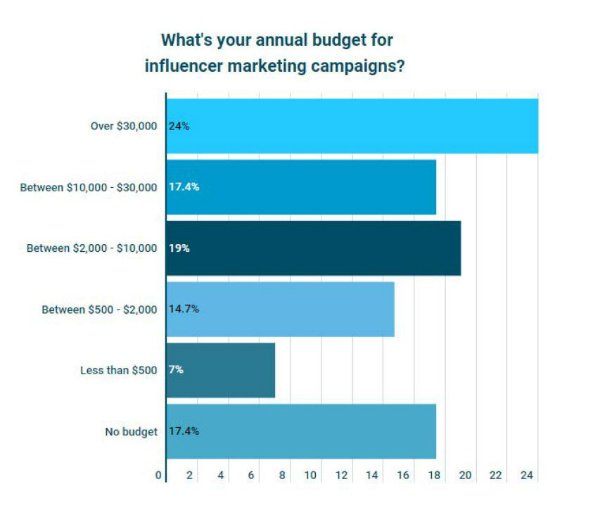 6) How are businesses managing influencer marketing?

The survey found about three-quarters of the respondents say their business has at least one full-time employee (FTE) dedicated to influencer marketing. That seems completely reasonable even at a $30k average spend. However, don’t pick people just based on the level of spend, instead, look for those with the skills that allow your business to get the most out of the program (pssst…they work in PR).

The survey report also seems to knock businesses for not having enough automation. Perhaps there’s a case in consumer brands, but I don’t think there’s a place for it in B2B for several reasons.

First, this is a relationship business. You can use automation to facilitate relationship building, but don’t rely on it. Second, I’ve done demos of a dozen or so tools overs the years, and they all pretty much do the same thing: promise a secret sauce and then select influencers based on the number of twitter followers they have. I don’t think any of them do it especially well.

It’s not a bad idea if you’re just starting out in an industry and don’t know anyone. However, a better way to pick influencers is to read, study, network and generally immerse yourself in the industry so you learn who is who – and that’s what PR pros do.

The full report is heavy on graphics which makes it a quick read. It’s freely available for download with registration: The Global State of Influencer Marketing in 2019.

Looking for an agency partner that can both
bring creative ideas and use data to execute?
Give our services a try.  Talk with us!

6 Myths about Content Marketing and the Role of PR

Some time ago I pitched a reporter, who was looking for sources, on social media for a client. The pitch...