Home > Marketing > How Long Should a Blog Post Be? [Useful Blogging Statistics]

How Long Should a Blog Post Be? [Useful Blogging Statistics] 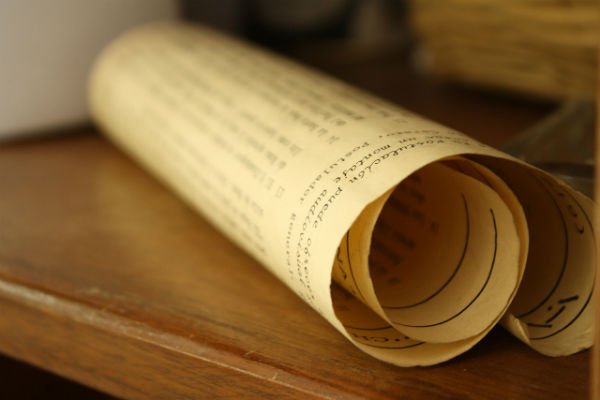 A survey of 1,000 bloggers found the average blog post is about 1,100 words long and takes an average of 3.5 hours to write. While length doesn’t necessarily equal quality, bloggers that write longer posts generally report better results.

Writers that report success with blogging share the following characteristics:

Of course, correlation is not causation, but the circumstances are such it’s clearly more than mere coincidence. That’s according to the findings of the latest survey by Orbit Media, a web design company that has surveyed about 1,000 bloggers annually for the last several years.

I’ve reviewed this survey for the last three years (here and here) and have generally found the findings to be consistent with my own experience.  To that end, I started blogging for business before starting this blog, which celebrated 10 years of publication earlier this month and eventually became a natural platform for starting an agency three years ago.

This year, I dived into the survey data again and have provided the findings first which is followed by my own analysis. It’s important for readers to keep in mind my world view is heavily filtered from the perspective of B2B marketing and PR. 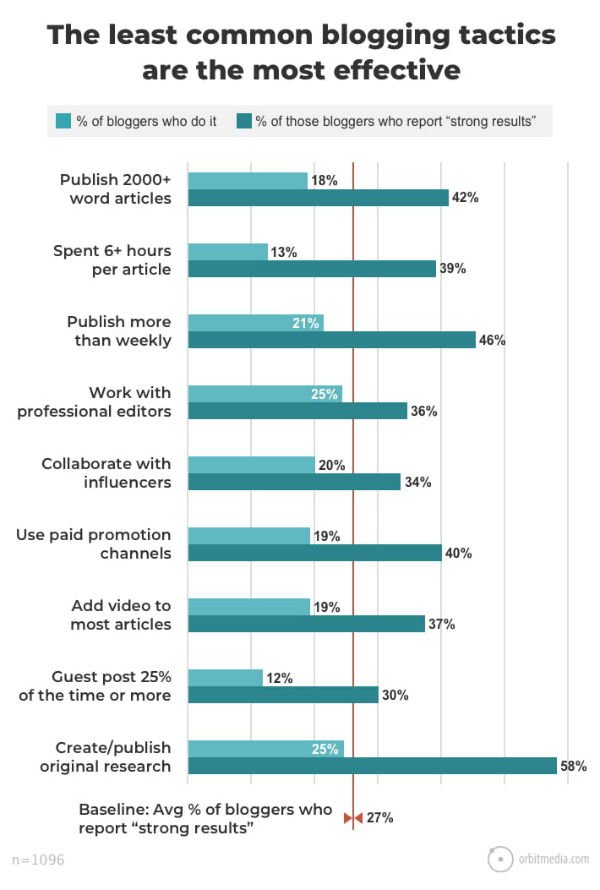 Here’s what the survey found this year:

“As with time spent per post, the length per post climbed year after year since 2014. At that time, the average post was just over 800 words. Today the average blog post is 1151 words. That’s a 42% increase over the last five years.”

But not everyone goes long:

Still, for those that do write longer posts, they are “far more likely to report strong results.”

So, how long should a blog post be? The best answer I’ve found is as long as it takes to effectively communicate an idea.

Length as critical thinkers rightfully point out, is not necessarily indicative of quality. However, to thoroughly examine a topic, you will naturally explore many different angles, which lends itself to length.

There are a whole bunch of marketers that are convinced short content is best. They are not wrong since people are distracted, however, there is a place for thoughtful long-form content. If you commercialize a complex product, with a long sales cycle, as many B2B marketing organizations do, then I’d venture to say the data shows long-form content is essential. 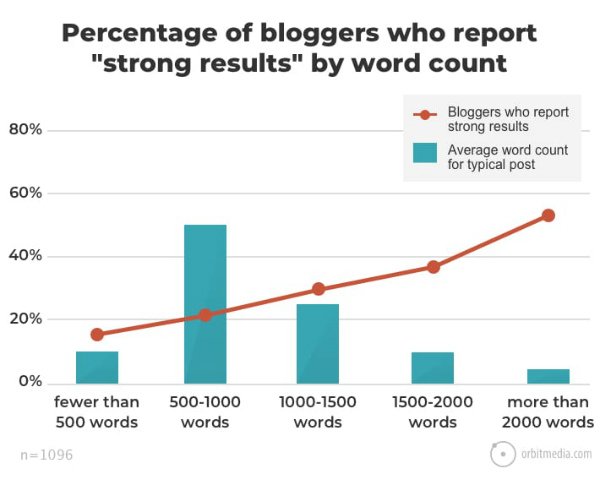 2. How much time does it take to write a blog post?

According to the study:

But averages can disguise real insights in data:

Still, “that additional time pays off,” according to the findings:

“Bloggers who spend 6 or more hours per post are 56% more likely to report ‘strong results’ than those who don’t.”

Merely logging hours on a writing project isn’t necessarily a measure of success. If you bill by the hour or pay by the hour, you know this to be true. Even so, sometimes text just seems to fly from my fingers to the page for me, and other times I agonize to produce a few words.

Most writers have this problem at least some of the time, but I can tell you, if you write often, things do come easier. If you are a marketing leader and force your team to produce on deadline, they will eventually succeed – and they’ll get better at it.

Marathon runners didn’t start out running 26.2 miles – they worked up to it over time. Yet, they don’t run that far every day and they do have bad days where their pace falls short of their goals. But they push through the hard parts, and because they do, things generally go smoother when they stick to their training regimen.

Writing, blogging and producing content works the same way, even for a team. If you do it often, and you build systems and processes, including reviews and approvals, it will become easier, operate more smoothly and generate measurable results. 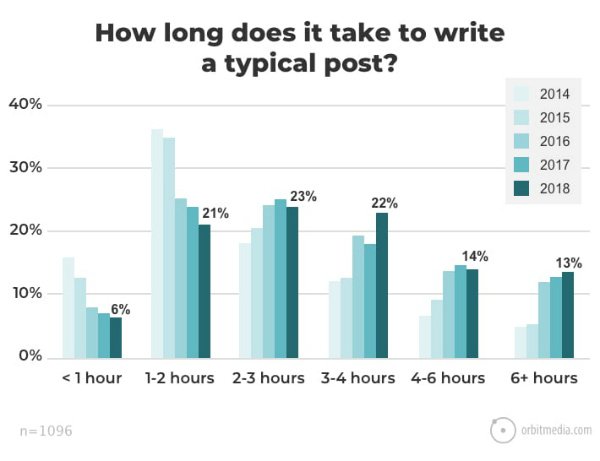 3. How often should you publish new posts on a blog?

The Orbit survey found this year:

“Most bloggers publish consistently but blogging frequency has been in gradual decline for five years. In 2014, ‘several per week’ was the most popular answer. Today ‘several per month’ is more common. The percentage of bloggers who publish daily is half of what it once was.”

Merely publishing more posts doesn’t guarantee success but taking a systematic approach does. Most professional publications do this several times a day – they have reporting standards, writing guidelines, a process for editing, writing headlines and publishing – all on deadline.

It’s the consistency that matters. There are many other surveys besides this one that supports this viewpoint. It’s also reflective of my own experience.

Why? Let’s continue with the exercise analogy: Will you get in shape going to the gym once per month? Probably not. Once a week is a little better, and several times a week is definitely better.

When you publish with frequency, you condition yourself, your team and your audience as to expectations and quality. With a systematic approach, where quality is assumed, you consistently add more content to your own dedicated channel, search index, and social stream that works in clicks much like compound interest works in finance. 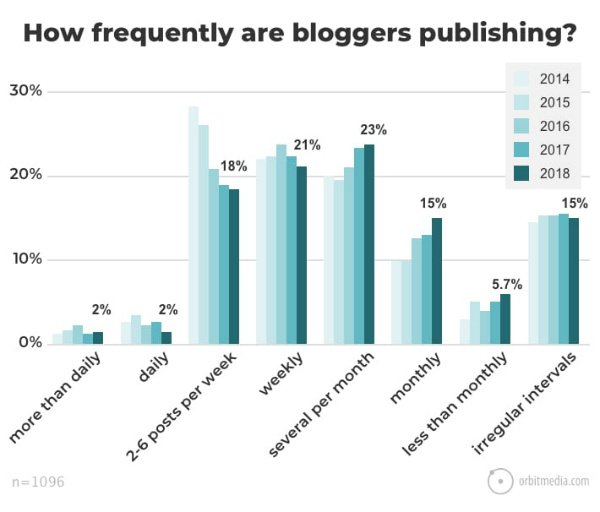 4. Should you use multimedia – like photos, graphics and video – in your blogs?

“Just over half of bloggers include multiple images in each article and about half are incorporating lists in some way. Those numbers have held steady for the last few years.”

Video and podcasts count too:

And, those that do use multimedia in their blog posts say it works:

I’ve always found this to be both true and generally overlooked in business circles. Imagery matters.

We learn to communicate visually – think of a child that draws pictures – before we learn to write. We use signs on public roads and highways to communicate complex ideas – yield, merge, no passing – with symbols. Cave “drawings” are what give us insight today into hunting and migration practices of prehistoric bipeds, not cave “writings.”

Graphics and imagery in corporate blogging work best when it’s relevant, seeks to draw readers in and conveys an idea. This isn’t hard to do, but too many businesses this haphazardly, and after the fact, when it should be a component of the content creation process.

Additionally, multimedia files should be named accordingly, with alternative tags (ALT tags), and sized properly for your publishing template. These digital files are another asset, if optimized properly, that can be indexed in search and create a path to your publication.

5. What are some ways you promote a blog post?

While social media has value, organic reach has diminished, while tried and true stables like search engine optimization have become cool again:

“But year after year, more bloggers are more focused on SEO and email marketing. Since 2014 the popularity of those promotion channels has increased 34% and 76% respectively.”

Paid strategies too are important:

“Influencer marketing and paid promotion are both way more common than in 2014, but they have leveled off. The biggest change is the rise in popularity of paid promotion. The percentage of bloggers who pay for traffic has increased 322% since 2014.”

Six years ago, I noted the future of social media marketing was a path paved in payment. It seems obvious now — but it didn’t then. Social media experts were still saying things like a branded Facebook page might eliminate the need for a website or a blog (holy cow, was that wrong!).

Indeed, today, some level of paid distribution is important to blogging. Influencer marketing can be helpful, but B2B organization really need to have someone or team that understands who you are working with and why. There has to be a fit, and that fit can’t entirely be dependent on compensation.

If there’s one important aspect of paid distribution – it’s the goal you set: paid distribution should aim to get a little bit of audience you can’t reach otherwise…to join yours. If your paid efforts aren’t doing this, then you are in essence making home improvements to a rental property.

The survey also noted successful bloggers are twice as likely to go back and update older posts.  I put this into the content distribution tips category. This is because when you update a post with new information, you are giving search engines a reason to come back consider returning that updated post in response to relates search queries. 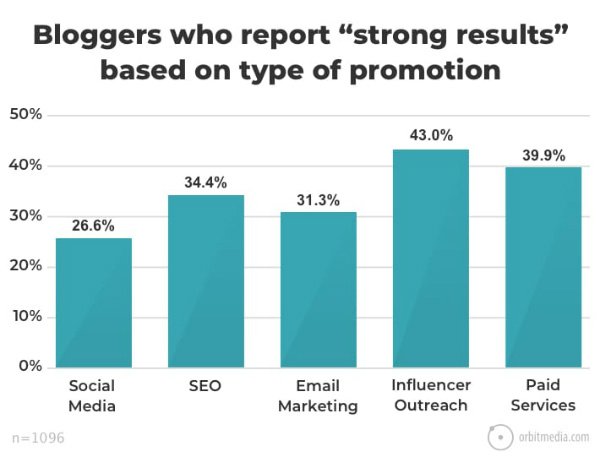 If this all sounds like a lot of work, that’s because it is a lot of work. But if you put the effort in, does pay off.

As I’ve noted before in a piece about B2B blog metrics, I once worked of a company that found visitors that engaged the blog were 50% more likely to make a purchase.  Why?  Because those visitors grew to know, like and trust us through content over time — enough to realize we understood their problems and had a solution that could solve a business problem.

At another company, and despite a litany of cultural and organizational challenges in obtaining data and establishing measurement, a business blog in its third-year blog was definitively tied to a touchpoint on the buyer’s journey for roughly one-third of enterprise deals with an average selling price for SaaS product with an ASP of $1.3 million.

And that was just one line of business, where the blog supported two other lines of business and had collected three years’ worth of metrics and anecdotal evidence as to the impact on the reputation of the organization and sales.

The full Orbit Media survey can be found here – and is available without registration. 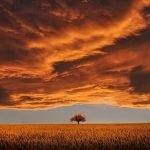 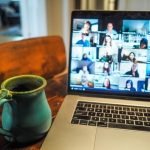 You can’t just spend your way to success in social media advertising. You can have the best research, personas, targeting,...