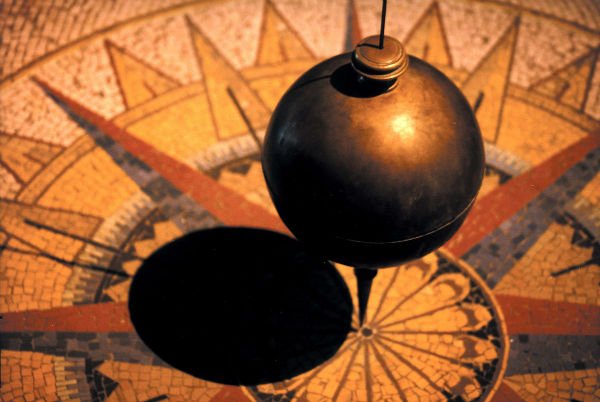 The pendulum of marketing can only swing in one direction at a time, but at some point, the forces of gravity slow the swing and eventually take it back in the other direction.

I sense we are reaching that point in marketing, with respect to data and creativity. For years marketing leaders have all heard data, data, data. While clearly data has an important role in marketing decisions, the community is also beginning to recognize data has several limits (click fraud aside).

First, data tells you what happened, not why. Second, data cannot tell you what will happen, only what might happen if nothing changes. Third, the interpretation of data is still highly subjective – even the best pollsters and statisticians get it wrong.

The last point is particularly important in marketing because people do not make rational decisions. We buy on emotion, feelings and impulse. Despite all the analysis that Amazon, a company built on data, poured into its site decision for a second headquarters, Jeff Bezos famously shocked disciples when said he would ultimately decide Amazon HQ2’s location on “intuition.”

This is the role of creativity in marketing: to drive an emotional connection and feeling of belonging. We all want to be part of something. Where every business has data, perhaps even the same data, we cannot have, by definition, the same creativity.

And that’s the theme for this week’s Unscripted Marketing Links (UML). As it is on the occasional Saturday, I round up three ideas, wrap them insight and perspective and present them here for your perusal.

1) Digital is killing creativity in marketing.

“The majority of marketers claim digital growth is having a detrimental impact on creative quality, new research reveals.”

That’s according to Oliver McAteer, writing for Campaign Live about a survey by buy-side vendor Sizmek. The company surveyed 500 marketers in Europe and the US and found many admit to struggling to marry “digital advertising and powerful creative work.”

He summed it up:

“The relationship between creative and digital is being rocked by an intense industry focus on data, artificial intelligence and privacy.”

And then noted the statistics:

“Nearly 70 percent of marketers surveyed believe that ‘digital growth in advertising has come at the expense of the quality of creative.’ Meanwhile, 84 percent say A.I. means nothing without the creative to support it.”

Reporting on the same study, Erica Sweeney noted for Marketing Dive that:

“Most marketers, or 91%, think creative input is just as important as data in digital campaigns.”

By my math on the back of a napkin, of the 6,829 martech companies listed Scott Brinker’s most recent martech landscape infographic, just 144, or 2%, are categorized under “collaboration.”

In other words, as an industry, we’ve amped up the demand for creative content 10-fold but are only beginning to think about investments in the supply.

One of the ways CMOs have set out to solve the problem is by bringing more creative work in-house.

A study by Forrester Research and the In-House Agency Forum (IHAF) found “Advertisers with in-house agencies increased to 64% of the survey’s respondents from 42% a decade ago, according to the study,” as Alexandra Bruell recently reported for the Wall Street Journal.

By “advertisers” the report means big brands – think CPG – that spend a lot of money on marketing, including traditional Madison Avenue-style marketing. The study polled 325 companies to generate the report, “including marketers with and without in-house shops, as well as external agencies and vendors.”

“More than one-quarter of respondents said the greatest advantage of having an internal agency was ‘knowledge of the brand,’ while 20% said the greatest advantage was the group’s ‘knowledge of the business.’ A number of respondents also selected ‘cost effectiveness’ and ‘speed,’ with fewer selecting categories such as ‘confidentiality’ and ‘dedicated resources.’”

It’s not the only study to point to this trend. A survey by the Association of National Advertisers (ANA), which polled 400 of its members, found “90% of surveyed brands say they’ve boosted their internal operations,” according to a report for AdWeek by Lindsay Rittenhouse.

Indeed, anecdotally, we’ve seen notable brands have been moving in this direction for some time. For example, earlier this year, Marketing Dive reported such a move by Proctor & Gamble, while AdWeek detailed a similar initiative by Verizon.  Additionally, The Next Web pointed to Sprint, Netflix, and, L’Oreal, among others.

There are no signs that this is slowing either. Citing a survey with 400 respondents by the talent agency, The Creative Group, the Bulldog Reporter noted:

“60 percent of advertising and marketing hiring decision makers plan to expand their teams in the first half of 2019.”

We’ve seen this movie before in other vertical markets, like legal, which easily rivals advertising in spending ($100 billion+ trade hands annually in the US market alone). For example, the financial crisis in 2008 spurred corporations to reduce the number of law firms they use (big companies can easily have 100 law firms) in favor of boosting headcount in corporate legal departments and bring more legal work in-house over the course of a decade. 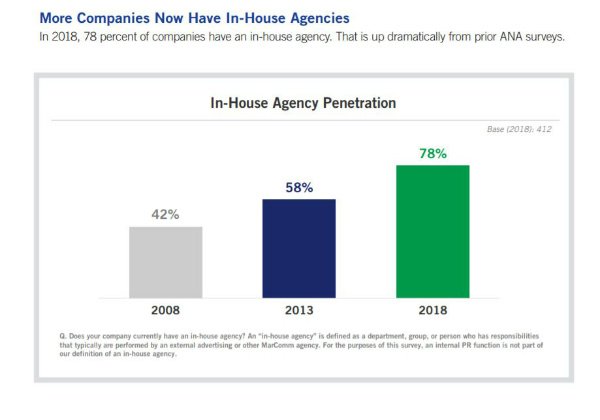 Growing any team is a leadership challenge. Growing a team as specialized and nuanced as a creative team will challenge even the best marketing leaders.

It requires hands-on involvement and a focus on process improvement and team building because change is hard. When change isn’t managed well, leaders wind up with marginal grades, morale sinks, the teams don’t play well together, and the results show up in operational metrics.

That sums up the findings of a new report based on a survey of more than 500 in-house creatives – 2019 In-House Creative Management Report – by inMotionNow and InSource, a professional association for in-house creatives.

According to the report:

Experienced leaders know that one disgruntled employee can create havoc on team dynamic and the report suggests organizations may have anywhere from 40-50% of its members feeling disillusioned. It’s showing up in morale too: 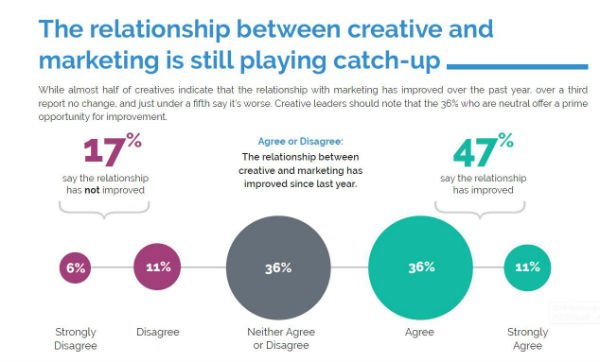 Businesses need marketing and creative departments to work well together – remember digital is crushing creative with demand – but peak performance just isn’t there yet:

“Just 47% said the relationship between creative and marketing is better this year than last. Collaboration between marketing and creative didn’t fare much better with just 51% saying collaboration was effective.”

We can see that concern surface in this study:

“A majority (72%) of respondents say ‘obtaining the necessary information just to get started on a project’ is an administrative task that soaks up time that would be better spent doing creative work.”

“Nearly half (48%) say they spend about one day a week or more on non-creative work – that’s up 14% from the same survey last year.  In addition, an astonishing one-fifth (22%) indicated they spend 10 hours a week or more chasing down information, feedback and approvals – that too ticked up 6% from last year’s survey.”

It shows up in the marketing measurement feedback loop too:

“An astonishing 79% of creatives said they receive feedback on the performance of creative assets just some of the time or not at all.”

If there’s an upside, it’s that the in-house trend is still fairly new to the marketing community and there’s time to put change management and processes improvement plans in place. To that end, there is evidence in the survey to show that creative teams with a strong organizational relationship with marketing pays off for the business:

So, adding headcount to improve the quality of creative alone isn’t enough:

It’s important to note that inMotionNow is my client, but I’ve chosen to write about the study because I muse about creativity on these pages often, and believe this study has value for my community (see disclosures).

Integrating Creative Into a Data-Driven Plan

To be clear, I am not arguing that data should be cast to the wind and marketers should return to solely building a strategy based on intuition.  Instead, I’m saying smart marketing leaders are recognizing they’ve overcompensated in data and are now working to bring creativity back into the mix. However, too many are taking the approach of “here’s my idea based on data…now go make it pretty” where properly integrating creatives from the get-go will separate those in-house initiatives that succeed from those that meander along.

Looking for an agency partner that can both bring creative ideas and
use data to execute?
Give our services a try.  Talk with us!

How Long Should a Blog Post Be? [Useful Blogging Statistics]

A survey of 1,000 bloggers found the average blog post is about 1,100 words long and takes an average of...