Survey Report: Should Brands Take a Public Stand on Politics?

It’s harder to hide from non-stop political noise these days as the United States has never been more divided. Various factions seem engaged in a contest to outmaneuver each other to be more polarizing.

There’s an old saying that business and politics don’t mix.  However, in this environment, businesses are increasingly finding themselves wrestling with that question: Should brands take a public stand on political issues?

To be clear, we are not talking about Patagonia supporting the environment or Google opposing the repeal of Net Neutrality. In cases like those, there’s a very clear impact on business and you could credibly argue businesses are obligated in those cases to enter the fray. The question this survey gets after is far more visceral.

As it is with politics, there’s no shortage of opinions on the topic. Aside from a few high-profile anecdotes, I haven’t seen very much in the way of research on the topic, particularly with a line of questioning that brings back the original reasons for making a purchase, like quality, convenience and price. And that’s the purpose of this survey — to bring another level of objectivity to this business decision about politics.

1) Most respondents say brands should stay clear of politics.

Nearly half (49%) of overall respondents said brands should not weigh in on political issues. However, it’s not a majority because about one-third said they believe brands should get involved, while another 22% were unsure. Sentiment analysis around this question suggests context matters. 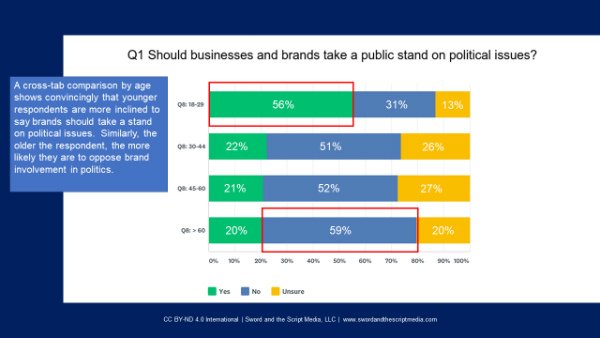 A cross-tab analysis by age shows a compelling correlation between age and the viewpoint on this question. Younger people, ages 18-29, were more likely to say brands should take political sides publicly (56%). The older the respondent, the more likely they were to stay brands should abstain from politics. 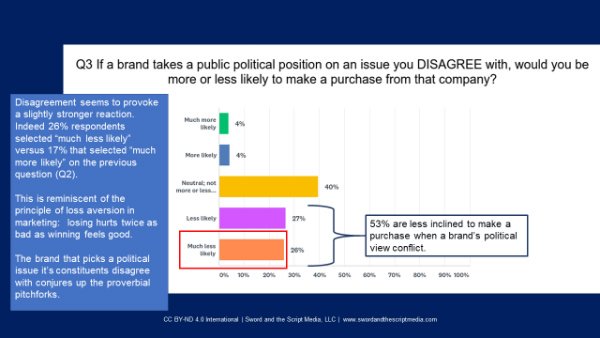 3) To agree or disagree is a critical question.

4) Women are more likely to act than men.

A cross-tab analysis of this question by gender shows respondents that identified as women were 16% more likely than men to take action against a brand that takes a political position with which they disagree.  This shows while men are more likely to say brands shouldn’t get involved in politics, they are also less likely to act if a brand does pick a political side. 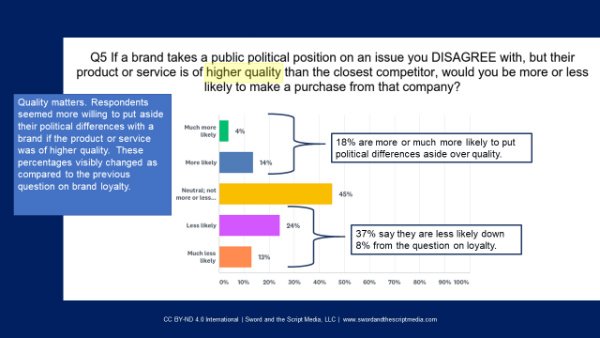 5) Quality, convenience, and price have a mitigating effect.

If the quality, convenience or price of a product or service is better than the competition, respondents said they would still buy from a brand even if they took a political position with which they disagree. Recall that 53% were less likely to make a purchase if a brand took a position with which they disagreed, however, when mitigating factors were introduced, that number fell in the following ways:

What Should Brands Do?

The survey data suggests to me that a brand could potentially take sides, and not only survive but thrive. Still, it’s a risky proposition that would require extensive resources to successfully navigate.

If brands are truly intent on being good corporate citizens, I believe a better path is to strive to unite people – be it the next Ice Bucket Challenge or $5 million Super Bowl spot. We don’t need more voices or money with a political bent aimed as stoking up discontent with the other side. I’m hard-pressed to believe a majority wants their choice of paper products at the store to emerge as a political statement. We need civility, understanding and a reminder that we can have a difference of opinion and still be good neighbors.

It’s a hard problem to solve. The eggshells we walk on today are so delicate, even the high road brings risk. Then again businesses are born to solve problems.

Should brands take a public stand on political issues? from Frank Strong

This survey was conducted using a commercially available online research panel from October 19, 2018, to October 20, 2018. The poll queried U.S. respondents ages 18-79 about their views about the public endorsement of political views by commercial businesses. A total of 263 respondents completed the survey and has a margin of error at (+/-) 6%. The percentages on individual questions may not add up perfectly to 100% where rounding is applied.

The entire report, which is embedded nearby, has been posted to SlideShare and may be downloaded as a PDF.