PR and Content Marketing Insights from the Edelman Trust Barometer 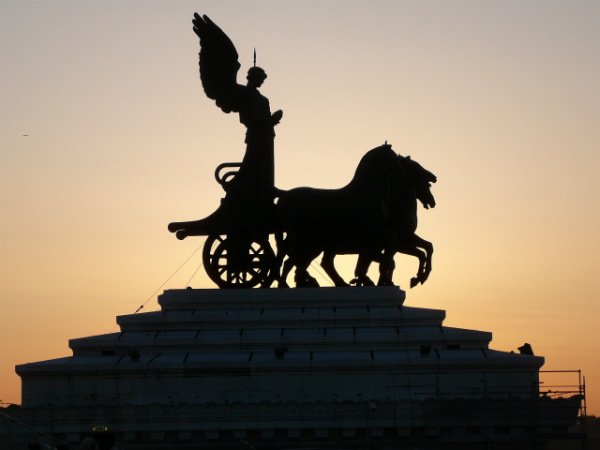 A friend of mine was telling me about a political news story last year.  I don’t remember the precise angle, but I remember thinking it was outlandish and indicated didn’t think it was true.  To prove otherwise, she pulled out her phone, opened up Facebook, scrolled to find the article and then handed me the phone.

The article was produced by an outlet that at first glance looked credible.  It had a name that sounded like a daily newspaper – the “Herald” or “Courier” or something like that – but the “about us” section was telling.  I study organizational persuasion for a living and I knew this was not bona fide journalism.

Some clever guy with a political bent bought a domain and polished up a site to look like journalism.  He then injected this gossip into Facebook and drew visceral reactions from people like my friend – which the algorithm rewarded with more exposure.

There’s nothing wrong with having an opinion. There is something wrong with perpetuating erroneous information and dressing it up to look like journalism, the least of which is most people — according to research — can’t tell the difference.

There’s plenty of stuff like this from both sides of the aisle, but it’s important to point out it’s not just politics.  I see people I know share all sorts of whacky stuff of questionable credibility on Facebook about health, medicine, finance, and lately, cryptocurrency.

This sort of thing happens every day and on a massive scale and we can see it in the 2018 Edelman Trust Barometer, which says this year will be a “battle for truth.” 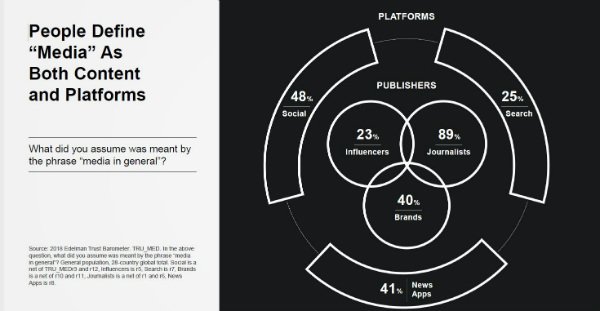 The Edelman Trust Barometer is an annual survey that examines the “volatility of trust in social institutions” around the world.  The institutions it looks at are as follows: government, non-governmental organizations (NGOs), business and media.

This year the survey was conducted in 28 countries and obtained 1,150 respondents per country.

One of the most significant findings from the study was that media is now the least trusted institution.  There are several statistics that help explain why:

However, there’s an important nuance in that people define “media” as both content and the platforms – search and social media – on which they are distributed.  While 65% of people obtain news this way, trust in platforms declined 11 points in this year’s study.

Other readers liked these related posts:
The Future of Marketing Looks More like Public Relations
Trust and the Unlikely Reinvention of Advertising [UML]
Visibility is a Commodity; Trust is the Ultimate Conversion

4 Ways for Business to Build Trust

In reviewing the study, I think it has implications for business in public relations and content marketing.  Indeed, there are some opportunities to build trust, especially as a related article aptly said, “against a backdrop of stagnating trust in business on a global scale.”

1) Find your voice of authority.

The study suggested that “voices of authority have regained credibility.” Among the top five voices people said they trust include the following:

Technical expertise is particularly relevant to the B2B technology space.  Even those with long tenures in technology – CIOs and CTOs for example – need expertise in the niches.  Using your technical experts to explain emerging concepts and breaking down trends – without a sales pitch – will be useful for customers and prospects and build confidence in your business.

Here’s the catch: business is entitled to an opinion, just make it clear it’s an opinion.  You can and should run content marketing like a publisher. Ideally, your creators are trained to use journalistic principles in creation. Rooting opinions based on fact is tried and true.

So while you shouldn’t shy from the fact you are a commercial entity, you also shouldn’t pretend to be an independent news organization.  You can be an ethical and persuasive PR pro or marketer without selling your soul. If the Trust Barometer is any indication, your career depends on it.

2) Trust as CEO’s tool for profitability

For a long while, the pace of accounting or financial scandals – and the subsequent criminal trials and ensuing media circus – destroyed the trust in top business executives.  That seems to be dissolving with time as CEOs gained seven points (44%) as a “voice of authority.”

The Edelman study found most people believe trust is the highest priority of work for CEOs. More importantly as the graphic nearby illustrates, trust is an underlying factor that flows through the products a business commercializes, the decisions it makes, and the profits it earns.

Features and benefits look good on a creative brief, but people still want to do business with other people they know, like and trust.  Communication builds trust and it’s a function of leadership. Engaged CEOs can play a powerful role in thoughtful external communications including PR and content marketing.

Don’t make home improvements to rental property. That’s the quintessential case for building an owned media platform. If you pour a lot of resources to build an audience on a third-party platform, and then the site changes its algorithm because it wants to sell more ads, you stand to lose everything you’ve invested.

This remains a valid point – and a mistake many marketers still make – but the Trust Barometer this year provides another reason: people are less trusting of social media. Businesses should build their own platform, on a domain it owns and controls.  “Control” includes control over the veracity of the information.

A business that strives to help customers and prospects with useful and relevant content, conveyed with journalistic principles, consistently over time, will almost inevitably build equity in trust that translates into financial performance.

That’s not a lesson of spin — it’s a lesson of carefully avoiding aspirational numbers some financial journalist will pin an exuberant CEO down on the next quarterly earnings call.

News coverage is still highly credible and this study suggests it’s growing in importance.  This is logical because coverage is earned, not purchased.  Third-party credibility has long been a hallmark of PR.

Yet earning coverage has gotten harder.  There are fewer reporters. They are naturally skeptical, and the trend in “fake news” has everyone on edge.  Nobody wants to be duped.

In B2B technology, journalists are inundated with pitches from thousands of venture capital-fueled startups all claiming “disruption” and “innovation” and “blockchain this” and “machine learning that.”  They can’t hit the delete button on email fast enough.

Owned media is a way to cut through the clutter.  I saw this clearly in 2009 when a story I was pitching by email didn’t get traction until I turned it into a corporate blog post.  In the context of the Trust Barometer, there is a straightforward reason for this: it’s attributable information from a verifiable source with demonstrable social proof as to the relevancy.

In 1976, the communication theorist Hugh Rank provided a framework for evaluating political communication as propaganda – the intensify/downplay schema.

It’s amazing to me how well this construct stands up to time.  If you look at any message on any platform in this framework, you’ll find good indications as to whether not it is trustworthy.

I do work in, and write about, business and there’s plenty of propaganda there too.  Building trust is a better approach. You don’t have to take my word on it, but I would invite anyone that needs convincing to take a look at the “about” section.

You can find the Edelman Trust Barometer report here (PDF).

Can your PR firm bring big ideas and execute on them?
Give our services a try.  Talk with us!

Libraries, Long-Term Value and the Influence of Creativity in Content Marketing [UML]

One of the risks in marketing is the tendency we all have to get caught in a habit.  We all...