Home > Marketing > Pay to Play: Why PR and Marketing Should Care About Net Neutrality [UML]

Pay to Play: Why PR and Marketing Should Care About Net Neutrality [UML] 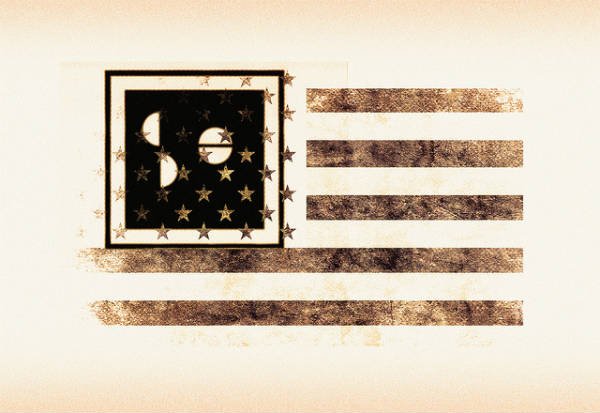 It’s become popular to mix business and politics of late as a number of companies have increasingly begun taking political positions.

Generally, and with very few exceptions, I don’t think that’s a good idea.  No matter what side you pick, you’re liable to upset half of your customers and prospects.

Now I’m a flag-waving registered voter, but nobody wins political arguments in blog comments or on Facebook, so the chances of winning both these arguments, and new customers, is unlikely.

Then there’s net neutrality.  This issue will directly impact everyone with internet access in America – and I also think there’s good reason to beleive it will have outsized effects on marketing and PR.

That said, it’s not exactly a divisive issue at the dinner table. Many polls suggest overwhelming, and often bi-partisan support, for net neutrality.  One recent poll shows about 60% of registered voters support it, 20% oppose it, and 20% are indifferent.

That indifference might fade once people realize that rolling back net neutrality – under an absurdly misleading proposal called “Restoring Internet Freedom” – is likely to spike costs at two ends:

Given how intertwined marketing has become on the web, I believe there’s good reason to believe this will fundamentally change the economics of marketing and digital marketing. While it currently costs something to create, and distribute marketing, businesses might also have to pay to ensure an audience has access to it.

Whether you’re selling cupcakes in a small town or commercializing business software in the cloud, the costs will rise across the board.

So, net neutrality is the theme for this week’s Unscripted Marketing links [UML].  As it is every week, I offer three sources of content I’ve vetted and recommend for your perusal. This week there’s a twist in the third piece – and a bit about what you can do at the end.

1) What is net neutrality? 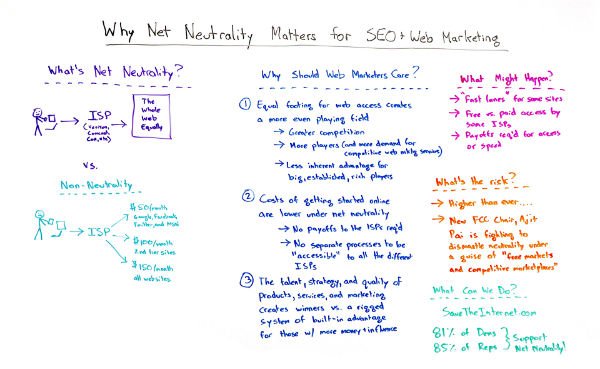 Rand Fishkin of Moz explains what the internet looks like with – and without – net neutrality in a Whiteboard Friday video titled Why Net Neutrality Matters for SEO and Web Marketing.

With net neutrality, he says:

“[Internet service providers] have a bunch more vectors (a) to get money from all these different websites and web services, and (b) to charge consumers much more based on tiering their access.”

His entire video is just 12 minutes and well worth watching it.

2) Putting small businesses at a disadvantage

News articles often cast net neutrality as a battle between technology giants and internet services providers (ISPs).  However, this is not the right framework.

That’s according to Rahul Agaskar in a piece he wrote for MarketingProfs titled Turmoil Ahead: The Future of Net Neutrality, Publishing, and Digital Marketing:

“In reality, the biggest winners of Net Neutrality were small and midsize companies that wanted to deliver their content, applications, and services via the Cloud. The rules ensured that they could deliver rich media at the same speeds as tech giants.

If Net Neutrality dies, Netflix, Amazon, Google, and their peers will pay ISPs to maintain their performance. They can’t afford not to. Even if they pass the cost on to customers, most will choose to retain their services. ISPs might even charge consumers for high bandwidth use, but that won’t stop Netflix addicts.

Among small and midsize businesses, however, self-publishing and owned media will take a hit. Smaller companies tend to provide content free as a marketing strategy. A business with a massive video library or interactive mobile app would struggle to pay ISP fees and still see an ROI. As a result, the death of Net Neutrality will nudge many marketers away from their Cloud and toward external channels.”

He also points that rolling back net neutrality could be another blow for authentic journalism.

“For years, the Web has blurred distinctions between news, marketing, entertainment, fact, and opinion. The post-Neutrality Web will bring this content melting pot to a boil.”

3) Illusion of killing net neutrality to save it

Mike Masnick writes in a rather unsettling rant on TechDirt, that the current effort to kill net neutrality is a cleverly fabricated illusion.

In a piece entitled, Don’t Get Fooled: The Plan Is To Kill Net Neutrality While Pretending It’s Being Protected, he says the current rollback will fail in court.  This is by design and will prompt Congress to write legislation that gives the appearance of saving net neutrality while actually ending it.

Seriously?! George Lucas couldn’t have written a better script for Senator Padmé Amidala in the Clone Wars.  Except this isn’t Disneyland.

Mr. Masnick likens the FCC action to deliberately setting a fire with the intent of pretending to be a hero in saving people from it:

“You’ll hear lots of tut-tutting about ‘uncertainty’ that has to be stopped. But, like zero rating and the fact that it’s not heroic if you rescue people from your own fire, the fire here is being set by Ajit Pai and big broadband’s key supporters. They’re setting this fire of rolling back Wheeler’s rules solely to whine about the uncertainty that will be caused by their own unnecessary rule change… and then will say that ‘only Congress can settle this.”

“It means people who are mad about this (as you should be) need to be direct in what they’re talking about here. Don’t pretend that Pai’s rule change is the real problem. It’s not. It’s just a mechanism to get to new regulations from Congress that will cause real problems.”

“And, most importantly, don’t pretend that a bill from Congress pretending to “save” net neutrality will actually do so, when it’s quite obvious that the bills being offered will undermine our internet, help big broadband screw over users, and diminish competition.”

I think there’s merit to Mr. Masnick’s hunch, but then again, this is a recurring debate.  For example, three years ago, in an Off Script series interview for this blog, Steve Farnsworth described it this way:

“Imagine the United States Post Office knocks on your door. The letter carrier demands a ‘special’ handling fee for a letter you already mailed. They explain that this handling fee ensures your letter is delivered at the usual time. However, if you don’t pay up, the letter might get lost in the back of the mail truck for a week. No crime has been committed since it’s now legal to shake you down.”

The difference between then and now is there was a lot more protest and commentary.  It seems to me many have become indifferent — and that’s concerning.

What I’ve Done About It (And You Can Too)

There are very few things that happen at the federal level that will directly impact the lives of every American and every business, but chances are, you will feel the effects of this one. As such, I’m doing something about it.  Here are the steps I am taking, and I hope other PR and marketing professionals will join me.

a) I’ve educated myself on the topic – really reading to understand the nuances as opposed to skimming headlines.

b) I have submitted a comment to the FCC for Docket 17-108. You should too but know your comments will be public.  TechCrunch explains how to comment here.

c) I will write my two U.S. Senators representing the State of Georgia. I will also write my U.S. Representative, once she or he is elected (there is a special election to replace Tom Price).   Here’s how to find your Senators (you also have two) and Representative.

d) I’ve written this post in an effort to influence others to action. I will share this – and other articles I see advocating Net Neutrality – regularly.

e) I’m looking for a credible organization lobbying for Net Neutrality and will make a donation.  If you can recommend on, please leave a comment, and I may update this point.

If you enjoyed this post, you might also like:
9 Little Stories from a One Time Public Relations Gig with the Ringling Bros. and Barnum & Bailey Circus

Ahrefs: An SEO Tool PR Pros Can Use to Outsmart the Competition [Product Review]

It’s hard to pin down a precise anniversary date, but PR and SEO have been together for the better of...