Brands Be the Content Customers Want…Not Next to It [UML]

In an age of ad blocking, forward-looking brands have to transition away from solely relying on sponsoring or being associated with the content their customers or prospects want or need.  Instead, brands have to also produce the desired content.

Content marketing is a natural and necessary progression for those that see the media and marketing landscape trends:

This reality is driving force behind the concept of content marketing which puts the information requirements of customers and prospects before a brand’s need for self-promotion.

It’s about helping buyers uncover and define business problems – and framing thinking for solving those. It’s a chance to shape a market with insight and influence outcomes with utility. It means becoming a trusted and reliable source of information.

Content marketing is about being the content customers want – and that’s the theme for this week’s Unscripted Marketing links [UML].  As with every week, below are three exceptional articles, reports or blog posts, that I’ve vetted and recommend for further reading. 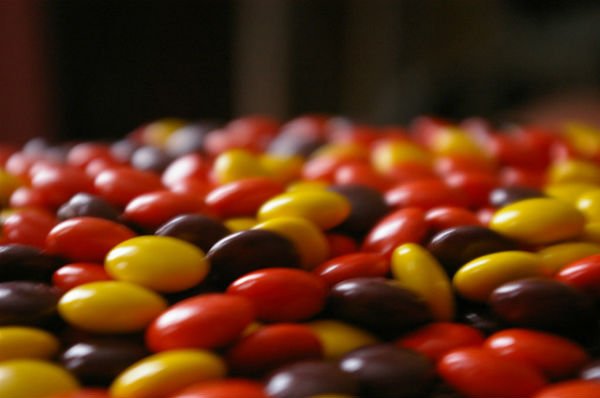 Generation X might recall Reese’s Pieces – the candy – had a supporting role in E.T., which at the time was the highest grossing movie for more than a decade.  What students of marketing history might recall, is that M&Ms, owned by Mars, first declined this opportunity.

The overall deal cost Hershey a reported $1 million and it put Reese’s Pieces on track to a “65 percent jump in profits just two weeks after the movie’s premiere.”

(Snopes qualifies this in greater detail: “Hershey did not pay to have Reese’s Pieces used in E.T., but it did agree to do a tie-in between the movie and the candy after the film was released. A deal was inked wherein Hershey Foods agreed to promote E.T. with $1 million of advertising; in return, Hershey could use E.T. in its own ads.”)

This bit of marketing trivia was revisited in a recent Marketplace story titled Big Soda and the Rise of Product Placement (audio):

“Product placement has become so commonplace in television and movies that audiences can barely recognize it anymore. Coca-Cola buying Columbia Pictures in 1982 marks the genesis of product placement as we know it today. Although the Big Soda company sold Columbia Pictures seven years later, they made a lasting impact on the industry. Soon, movies started to build stories around products, like the ‘Transformers’ franchise or ‘Harold and Kumar Go To White Castle’.”

There are clear parallels between product placement, classic public relations, and content marketing in sense it’s an effort to be part of the natural story, rather than next to the story, or interrupting the story.

Certainly, there are similarities to native advertising as well, but Coca-Cola was onto something in 1982 when it made that acquisition – and that’s the difference: For a period of time, an entire film production company was, in essence, a potential content marketing platform.

The Marketplace interview was based on the article titled You Can Blame Soda Brands for the Rise of Product Placement in Entertainment by Kevin Lincoln and Charles Bramesco.  It’s well worth a read as well. 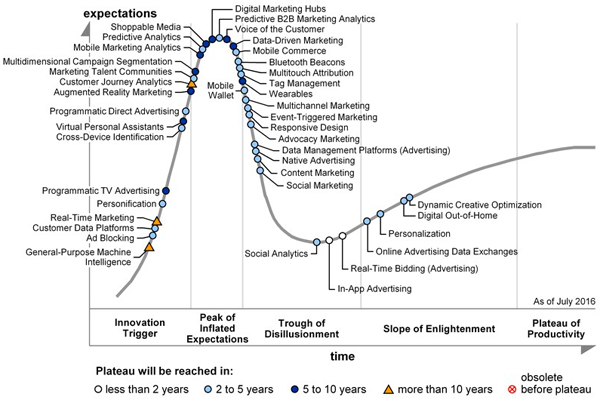 Content marketing “requires patience, discipline, and the willingness to withhold the commercial pitch in favor of a focus on delivering content that’s useful and engaging in its own right,” according to Chris Ross.

Mr. Ross is the Gartner analyst that wrote the assessment on content marketing for the Digital Marketing and Advertising Hype Cycle 2016. The hype cycle is a framework the organization applies to study emerging technology markets.

The adoption of content marketing is “early mainstream” and the benefit is “high” according to the report:

Though the report places content marketing in the “trough of disillusionment” the assessment is fairly upbeat.  “When done well, content marketing can help brands generate awareness, demand, preference and loyalty through social and other earned media channels,” according to Gartner.

We discussed the content marketing trough of disillusionment back in 2012, as it relates to a marketing philosophy, however, rather than an emerging technology segment.

“No battle plan survives first contact with the enemy.”  It’s true in war and it might be true in business.

While research demonstrates that B2B organizations that are successful with content marketing put a strategy in writing, execution counts for a lot.

That’s my takeaway from the piece Rebecca Lieb wrote for Marketing Land titled, Global content marketing: It’s gonna be big!  She identifies five content marketing themes emerging as we round the corner into a new year.  These include this one:

“As one executive I interviewed put it, ‘A content strategy is just a piece of paper. The really difficult part is implementation.’

‘Evangelism’ is a term I heard over and over. Convincing senior management to allocate budget. Determining who spearheads initiatives. Making certain numerous voices are heard, but that overarching rules and guidelines are enforced. Developing training programs, perhaps establishing a Center of Excellence.

Small wonder that when asked what their principal duties as global content leaders are, ‘change management’ was the most-cited term.”

There was a general officer I once worked for who was famous for saying “the enemy gets a vote.” The analogy in business is that the competition, customers, prospects and the audience gets a vote too.

Content marketing requires a cultural, philosophical and marketing organizational change – and so the committee with voting authority grows broader.  It’s true, you need a plan to succeed with content marketing – and that’s also true for execution – if your brand wants to be what people want and need.

Does your PR agency make your job easier or harder?
Many B2B agencies are good at content. Others are good at earned media.
It’s rare you find one good at both.  We are.
Here is a summary of the services we offer and the best way to contact us.

If you’re not using Facebook ads because you don’t think they work in B2B marketing, then you are among thin...