Apple vs. Chevron Revenue? It’s Content Marketing out of Context 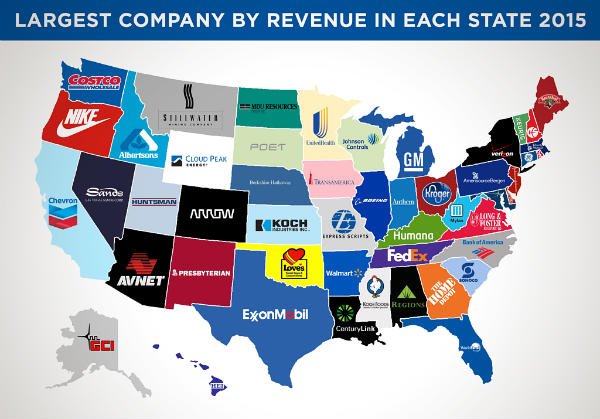 Have you see the graphic nearby?  I’ve noticed it posted a dozen different times on LinkedIn recently – and each time it seems to get further apart from the truth.

For example, the state of California stands out because Apple is based there and that company has been flirting with astronomical sales numbers in recent years.  Certainly, Chevron, with the trend in lower oil prices isn’t making more in sales than Apple, right?

The difference is $100 billion. Even at the scale of billions, that’s a pretty big difference to miss considering just one billion dollars is 10 crates of $100 bills (good visual here).

I set out to find the source.

Don’t miss these related posts:
The Facebook Frozen Frog and Fodder for Content
Teaching and Relevance: The Last Mile in Marketing
The Shocking Beef about Feeding the Content Monster


Using the reverse image search feature on Google, I traced the image back to this post published by a cloud vendor Broadview Largest Companies by Revenue in Each State 2015: MAP. That post was published in June 2015 according to the dateline posted at the time of this writing.

In the post, the company offers the caveat that the data source is the Hoover’s database and then offers this explanation to the obvious question:

“At first glance, you may ask, “Where are Apple and Microsoft?” Yes, these are huge companies but this map is specifically looking at total revenue from the last fiscal year. If we look at California with Apple vs. Chevron, there is a large discrepancy between market value and total revenues. Apple’s market value as of March 31, 2015 was $724 billion while Chevron’s was only (and we use “only” lightly) $197 billion. In terms of revenue, Chevron comes out on top with $203 billion in the last fiscal year while Apple had revenues of $182 billion.”

Wait…what?! I just checked those 2015 numbers and proved them wrong!   I looked at the footnotes of the Broadview post and saw my clue: despite the reference to 2015 in the headline and dateline, the revenue comparison was based on 2014 data.

Indeed, by the end of the fiscal year in 2014, Apple posted revenues of $182 billion and Chevron revenue of $200 billion.  So at the time Broadview published this graphic, half-way through 2015, the data, and the context in which this data was presented, was accurate.

The original graphic published by Broadview (shown nearby) included a disclaimer in green and a name and logo for anyone inclined to check the source.  The version I’ve observed pass around recently has had that green area conveniently trimmed off. 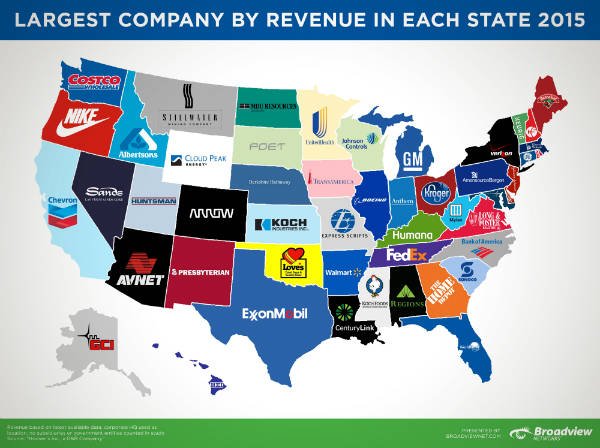 The result is, more than a year later, the masses are simply taking that graphic and re-posting it to LinkedIn.  In addition, these people are posting it as if the graphic was new – and without the context that existed at the time of original publication, or the footnotes that accompany the original post.

The important lesson here is that context matters in content marketing.  Studies show that people share things on social media simply because they feel it will make them look cool.  To that end, the average citizen isn’t going to fact check or even apply critical thinking to the content they share.

Ever hear someone say a news article or reporter took a quote out of context? That’s exactly what’s happening here — data from 2014 being passed around in 2016 like it’s breaking news.  Worse it gets mindlessly repeated until we’ve forgotten the origin and context and simply take it for the ground truth today.

Once that perception is set in the public’s mind – it’s really hard to change it.  There is no such thing as a letter to the editor on the internet.  Double check your content for context for both today and tomorrow.

Looking for future proof content marketing help?
A small agency with experienced talent won’t break the bank.
Here is a summary of the services we offer and the best way to contact us.
And don’t miss a post: subscribe to this blog by email here.

If PR professionals understand what it means to re-purpose content, it might be because there’s a new “pitching tips” blog...