Update 10/14/18: There are a couple of prominent marketers in 2018 that saying this advice is old but they are misguided. If you don’t own it, then the entity that does can, and they will do so when it suits them no matter how much time or effort you’ve put into it. Don’t make this mistake.

It’s almost cliché, except the advice is sage:  when it comes to content marketing, don’t make home improvements to a rental property.

The popular livestreaming video website Blab shuttered earlier this month with little warning.  The site grew rapidly with a reported 4 million users spending more than an hour each day, according to a blog post published to Medium announcing the shutdown.

“Blab was sort of a middle ground between Periscope (single-user video) and Google Hangouts (multiple users),” reported Matt McGee, in a news piece for Marketing Land.  “It allowed up to four people to participate in a live video chat and quickly became popular among marketers for its ease of use and integration with social media.”

The fact that it shut down is “yet another in a long line of cautionary tales about the dangers of marketing on a platform your business doesn’t own or control,” according to Joe Pullizzi of the Content Marketing Institute in a “rant” in the weekly PNR: This Old Marketing podcast.

Having once lost some 200+ posts created over a couple years when a site called Posterous shuttered in 2013, I couldn’t agree more. Posterous was similar to Tumblr and provided an easy platform to on which to create a blog-like presence – but once it shut down – the content, the community, the audience, and the work…all went away.

See these related posts:
12 Things You Should do to Amplify a Media Mention Once You’ve Earned It
7 Reasons Your B2B Content Marketing Program Fails to Deliver that You Probably Haven’t Heard Before
11 Simple Ways for PR to Score Content Marketing Points

For a time around 2009, some social media strategists were saying a brand Facebook page eliminated the need for a website.  Then, a couple of years later, Facebook changed the rules and tweaked its algorithm to the extent a branded page essentially gets near-zero visibility unless you buy advertising. Anyone that followed social media advice was caught in a bind.

LinkedIn too has tweaked rules on brand pages and groups – and it’s bound to happen for blogging on the platform and the new video features too. Instagram, which is now owned by Facebook, has implemented algorithm changes aimed at fostering paid media. After once declaring Google+ a social layer that would, in essence, be Google, the future of Google+ today is questionable.

Snapchat aside, those are just the sites currently top of mind in 2016. The list of sites have closed, changed, or in some way shifted focus is long and getting longer – Digg, Delicious, Orkut, Amplify, Freindster, and MySpace – among others.

Foursquare, for example, was once considered a social media tool marketers must have, “But over the years, Foursquare’s marquee feature – the check-in – was adopted by apps like Instagram, Facebook and Twitter.  Soon, the check-in became more of a feature than a stand-alone product,” as the New York Times put it. 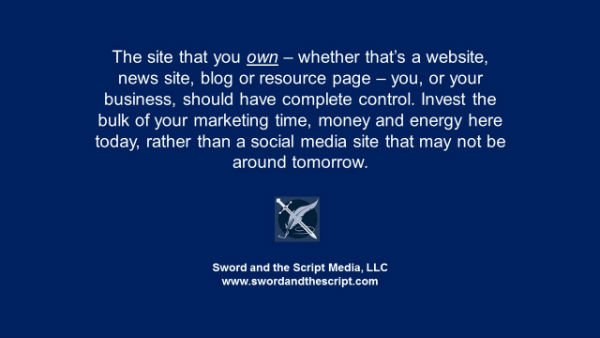 1) Be sure you actually own your owned media.  The site that you own – whether that’s a website, news site, blog or resource page – you, or your business, should have complete control. Invest the bulk of your marketing time, money and energy here today, rather than on a social media site that may not be around tomorrow.

2) Experiment with a purpose.  It’s okay to experiment with new sites and tools.  Marketing and PR types should be out in front understanding new capabilities, but do it with intention.  In other words, will you be able to draw a bit of that community into your own?  If you can’t then the purpose is questionable, at least from a business perspective.

3) Avoid overreliance on sites you don’t own. Rent-to-own is a useful content marketing tactic but be careful about how much effort you put into any site – whether it’s a publishing platform or social media site – if you don’t own it.  Or put a lot of effort into it but do so understanding that tomorrow, it could shut down with little notice.

So while it may be cliché to say for marketers, rest assured this is new to some and a hard lesson to learn at that.

Shopping for Content Marketing in the Discount Store [UML]

There may well be a disconnect between strategy and execution in B2B marketing. While businesses usually don’t think twice about...