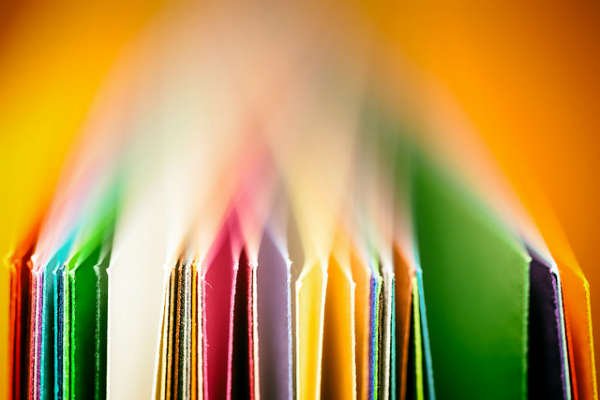 I have a lot of admiration for those individuals that hold a full-time job in business – especially in PR or marketing – and simultaneously wear a military uniform while serving in the National Guard or Reserve.

Kevin Hartman is one such person.  During the work week, he’s an account manager with LTPR, a public relations firm based in Portland, Oregon specializing in the financial, healthcare and professional services industries, including crisis communications and litigation support.  But on many weekends every year, indeed probably many weeknights as well, he’s a First Sergeant (1st Sgt.) for a National Guard public affairs unit.

By way of explanation, the rank of 1st Sgt. (E8) is perhaps one of the most crucial in the Army.  He or she is the right hand of a company commander and is responsible for the day-to-day administration of the unit.  First Sergeants are the sort of people that get things done.

And so it is with great pleasure, I bring you another edition of the Off Script interviews series. I trust you’ll see from his answers that he’s the sort of PR pro that also, just gets things done. 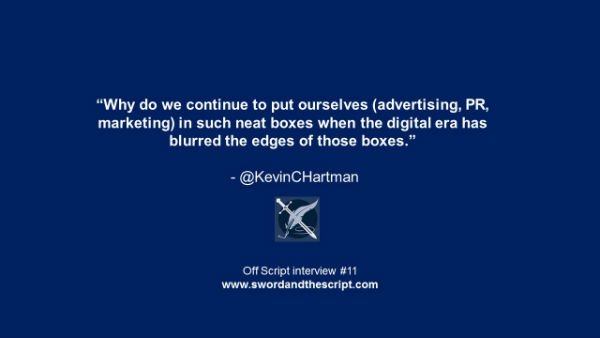 “I’m one of those journalists who made the jump. But it wasn’t a direct leap. It was a six-year process. My degree and early work was in broadcast journalism. I was a producer at the CBS affiliate in Eugene, Oregon for a few years and then, after marrying my wife and realizing a producer’s salary wouldn’t cut it for the family life we wanted, I left. It ‘helped’ that my National Guard unit was mobilized for Iraq, so making a career change wasn’t as intimidating. In all, the six-year period involved two combat deployments (Iraq ‘07-‘08; Afghanistan ‘12-‘13) with the National Guard and time in between working for the Oregon Army National Guard Public Affairs Office. I knew during my deployment to Afghanistan that I wanted to move into PR and used my post-deployment leave to find a job. That’s when I found LTPR.”

2) You also serve in uniform, in the Army National Guard, how has that experience shaped your perspective in commercial public relations?

“I’ve served in Army Public Affairs for nearly 17 years now. I’m somewhat of an anomaly because I came in as a very green private (E1) and have worked my way up to unit 1st Sgt. (E8) in the same unit (most soldiers change units every three years). I have had a lot of exposure to the government side of public affairs.

My time in the Army has given me with the ability to navigate stressful situations with a steady and clear mind, which is crucial for supporting a client who is in the throes of a crisis, I truly feel I have the patience to handle whatever is thrown at me. It’s given me perspective on how to prioritize what is actually important. I have to be more conscious of a budget. Money flows a little more ‘freely’ during wartime, not so much when you’re working with private firms who keep a close eye on their bottom line.

I also believe working through military policies and regulations helps me understand and anticipate the compliance and regulatory requirements of the banking, legal and healthcare industries. Something I didn’t expect to bring over is the skillset to translate complex or jargon-filled content into a clear message that an audience will hear and understand.”

@Frank_Strong yeah, intent, audience & method are all needed. Digital is blurring things. What may start as ‘earned’ can go ‘paid’ quick

3) In a recent conversation we had on Twitter, you noted digital media is blurring the lines between earned and paid media. What did you mean?

“My thoughts may ruffle some feathers for traditional PR professionals, but we’re beyond traditional PR roles. I think most of the discussion on content marketing comes down to a couple things. 1) What is your definition of content marketing and 2) Why do we continue to put ourselves (advertising, PR, marketing) in such neat boxes when the digital era has blurred the edges of those boxes. We often try to divide each discipline with the age-old owned, earned and paid media – but now we live in a ‘converged’ media landscape. We need to stop being territorial and focus on doing what’s best and most valuable for the client – unless we get to a point where we’re beyond our skill set. Service shouldn’t trump humbly knowing where our limitations lie.

So, what’s my definition of content marketing? Let’s break down the term into its two parts: Content – Marketing. ‘Content’ is the what while ‘marketing’ is the how. What are we creating? Text, graphics, infographics, videos, photos, etc. are all forms of content. How are we getting that content in front of people? Good old-fashioned snail-mail, email, face-to-face leave-behind material, social media, media (including bloggers), etc. are all forms of marketing.

This is where question two comes into play.  In PR, I focus on brand reputation and relationships with target audiences. Content marketing directly affects both of these areas. But shouldn’t advertising be aiming at this as well? Shouldn’t banners, commercials and other paid content be driven by a brand identity? Somewhere along the line, we put a firewall between traditional PR and traditional advertising. The messaging and brand focus should have always been unified between PR and advertising with each discipline complementing the other in messaging. The digital era has created converged media and we’re trying to prove whose efforts are more valuable. The debate often leaves the client holding the bag.

A good example of converging media is Facebook boosting. At first, I thought paying to be seen had to be advertising. Then, someone pointed out that paying to have content delivered to an audience that’s already signed up for updates (i.e., ‘Liked’ your page) is no different than paying postage to have your newsletter mailed to them. With some success and a happy client, it’s easy to quietly tiptoe into the land of paying for visibility to expand our reach. Now, that owned/earned content is becoming more and more paid.

So who owns content marketing? Ultimately, I think it comes down to how well you convey a brand’s reputation/image and connect/relate to your audience. It’s about value. Two different examples: a hilariously memorable Super Bowl commercial and a killer social media campaign. Both focus on delivering content that is well received and translates to a positive reputation and healthy relationships. On the flip side: a check-the-block press release and a lazy/disconnected billboard. Content is content. Where and how we market it isn’t as important as the value it provides. That’s why both PR and advertising need strong storytellers and clever marketers.”

See these related interviews:
PR, Content and Net Neutrality;  Off Script #9: Steveology
How a Period Begins a Conversation; Off Script #8:  Mitch Joel
PR and Storytelling; Off Script #7:  Lou Hoffman


4) What do you think these changes means for the profession of PR?

“We must be flexible and constantly learning about all forms of communications. I firmly believe we need to be curious to stay professionally alive. If our job is to create content that connects with our clients’ audiences, we need to know where they’re talking and how to join the conversation – even if it means older pros trying out Snapchat or – wait for it – PokemonGO. In this, we should also foster work cultures where junior executives can have a voice and train the more seasoned veterans. There’s a lot to learn from younger employees, especially if they’re the demographic we want to reach. But again, it’s about balance. Tried and true storytelling can often be applied to new channels. We can also learn from advertising what gets through the noise. People have trained their eyes to avoid border ads or click “Skip to Video” without watching the ad. But some ads still get shared all over the web’isphere because they said or showed something unique. That is content we should tap into in PR. After all, if it’s shared, we don’t have to pay to play.”

5) Has PR gotten harder or easier as a result of these changes?

“I think PR has gotten both harder and easier. It’s much easier to find a channel that you can reach your target audience through. We no longer have to rely on events or the media to get the story out. We can use Twitter, bloggers, infographics, Snapchat stories, and much more to reach people. But at the same time, all these channels mean more noise to cut through and keep up with. We have to work smarter than ever to make every effort count.”

Thank you, Kevin, for this interview, for adding value to the PR profession, and of course, thank you for your service.

Want to be part of the Off Script series? Know a PR, marketing or sales leader with compelling ideas fit for print?  Send us a note through the contact us page. Bonus points for those based in Atlanta.

I’ll often use the first draft of a press release for a pitch. This works for two reasons.  First, because...