In game theory, there are two types of games:  finite and infinite.

A finite game is defined as having known players, fixed rules and agree upon objective, according to Simon Sinek in a recent Marketing over Coffee podcast interview.

During the podcast, he says baseball is a good illustration of a finite game.  The players know each other, the rules, and have agreed, that whichever team has the most runs after nine innings wins the game.

This is very different than an infinite game, according to Mr. Sinek.  An infinite game is characterized as having both known and unknown players, the rules are changeable and the objective is to perpetuate the game. 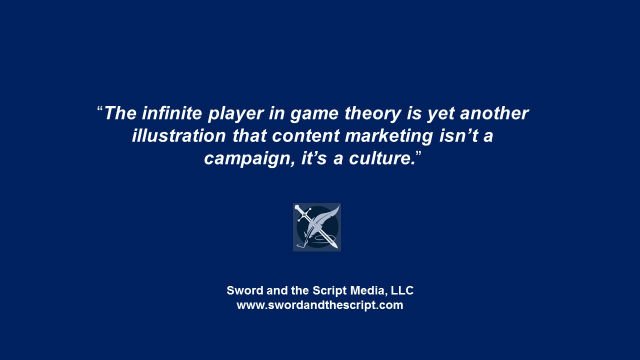 He points to the Vietnam War as an example, where the U.S. was fighting to win, and the opposing forces were fighting to stay in the game.  It’s also the cliff notes to the more recent wars in the Middle East over the last decade (the U.S. military pulled off what is perhaps the most remarkable change management program in history).

Bringing it back to business, Mr. Sinek says his work at Microsoft and Apple presents a stark difference between the finite and infinite players:  At Microsoft, he says in his observation, the majority of the executives spend most of their time analyzing ways to beat Apple.  By contrast at Apple, all of the executives spend all of their time on the company’s mission, such as discussing ways help teachers teach or how to help students learn.

In my mind, it’s a great example of a defining difference for effective content marketing.  Most marketing leaders are accustomed to marketing campaigns.  In other words, campaigns with defined players, rules and timing.

This is yet another illustration of how and why content marketing isn’t a campaign, it’s a culture.  It requires persistence, continuous iterative improvement, unconventional thinking, and it never ends.  Indeed, a culture of infinite players that frustrate the competition.

Are you ready to frustrate the competition?  Contact us today to set up a hassle-free time to discuss seven ways to forget the competition and focus on the future.

Service Management: Lesson for Martech from IT Operations [UML]

As marketing technology (martech) rises in prominence and begins to mature within marketing operations, marketing leaders would do well to...