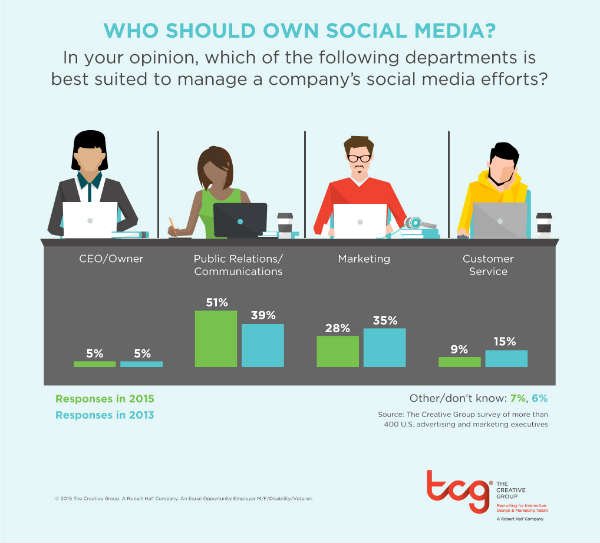 Ownership is a strong word in the high-stakes game of corporate social media turf wars – yet consensus increasingly points to PR as primary proponents.

A recent survey by the employment agency, The Creative Group, says corporate executives are increasingly inclined to pin the communications shop with such responsibility. More than half, or 51% of executive surveyed said the public relations or communications department is “is best suited to oversee an organization’s social media efforts.”

The tip of the scale appears to come at the expense of marketing (28%) and customers service (9%) both of which lost votes when compared to a similar survey conducted in 2013.  The results comparing the two surveys are depicted in a graphic, which is published nearby (click here for higher resolution).

Why is PR Well-Suited for Social Media?

Corporate reputation has long been the responsibility of communications departments.  The survey announcement points to the influence of social media on reputation management as the primary driver for the solidification in viewpoints.

Citing the democratizing effect of social media on the web, a mantra that “everyone owns social media” emerged a few years ago.  That idea is simply nonsense, at least in within the walls of corporate accountability.

Corporate reputation and accountability aside, there are several other reasons I’d point out to explain the survey results:

1. Social media is publishing. At the core, social media sites are publishing platforms with an editorial inclination.  Such work is central to daily duties of PR and communications professionals. Sure, these are relationship tools but content is still a form of currency bartered on the social exchange.

2. Social media is work. Social media requires diligence, persistence and perseverance to grow the channel into something useful for a corporation.  It’s the conversation and relationship building aspects that many a pundit has likened to real-world networking.

In my experience, I’ve always found marketing will create new social media sites with great enthusiasm.  However, that enthusiasm quickly wears thin when the effort-to-lead-conversion takes longer than expected.  But even an infant social media account bears value in relationships, connection and amplification making it both a useful tool — and one in which the PR shop is inherently interested in growing.

3. Social media fits neatly into the PR workflow. The daily PR duties of monitoring news, blog and social media coverage nest neatly with the process of curating content on social media. It’s quite natural to then systematically sprinkle in a bit of corporate content at the same time.

It’s certainly not an exhaustive list because when businesses run into problems it doesn’t know how (or want) to solve, they toss the issue over the wall to one of the catch-all departments: either the PR or legal shop.

Two of my tried and true PR use-cases for social media include two tactics:

However, social media has added a twist:  a passive and non-intrusive way to pitch reporters and influencers without clogging up an email inbox. The targeted advertising many social sites provide mean it’s a very compelling technique.

2. Paid social media for amplification and saturation. What should PR pros do with a solid placement once coverage has been earned?  Throw a link up on the “In the News” section of a website? Add the publication and headline to spreadsheet tallying up the year’s results?

A few years ago, to take advantage of earned media coverage, PR had to hope someone in marketing had the budget and inclination to purchase reprints — and then dedicate the resources to distribute it. Today, it’s very simple and cost-effective to use targeted paid social media ads to amplify and saturate a well-defined audience.

The Digital Skill Gap in PR

These two techniques underscore just how far PR has evolved.  More importantly, it sharply defines a growing gap between the importance of digital skills and those who have learned to ably implement them.   It’s an enormous challenge to find, attract and retain PR talent fluent in media relations, social media and content marketing.

All signs suggest digital marketing skills will become increasingly important to PR and communications professionals.   There’s little room to doubt the future of social media is a path paved in payment. Organic traction will require a heightened level of understanding and experience of paid models to be effective.

Absent such skills, we can all be assured, executive sentiment for ownership will most certainly ebb and flow.

I first spotted the survey in a story by Ragan’s PR Daily.  Interestingly enough, The Creative Group did not list a PR point of contact on its press release.

The volume of PR and marketing predictions reached an apex as we rounded the corner on a New Year and...