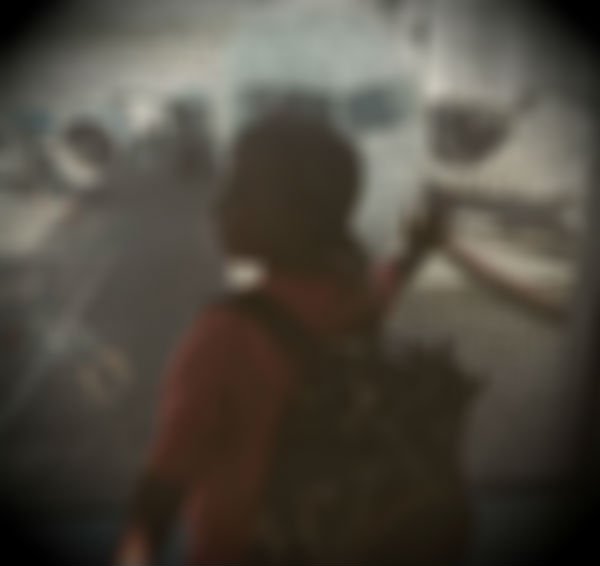 One of the first questions I remember Delta’s website asking me when booking travel was my daughter’s age.  She’s 4.

One fact of that experience I won’t soon forget was that despite having her age, Delta assigned my daughter a seat on our flight 11 rows away.

For a mere eighty-eight additional dollars, the airline was kind enough to reassign us in a row together.  And by additional dollars, I mean on top of the $1200+ I had already spent for the trip and not counting the additional $25 baggage fee (each way) for which carriers have become notorious.

There were plenty of empty seats on that flight and this should never have happened in the first place.

In fairness to the ticket agent, who traded knowing glances with a work acquaintance when I broached the issue at the counter, she suggested I might ask the gate agent at boarding to make the switch at no cost.

Faced with a dilemma of handing over ransom money to Delta in exchange for certainty, or taking a risk that an agent might fix the problem at the gate, I opted to pay.

No parent holds a higher responsibility – or more deeply visceral instinct – than keeping their child or children safe.  That’s hard to accomplish 11 rows away when the fasten seat belt sign is glowing.

The airlines are counting on it, indeed, I’d contend airlines, including Delta, prey on such emotions to separate a few more dollars from the consumer wallet.

Dear @Delta Why do you think it’s okay to put a toddler and parent in separate seats? We’ve been through this before. #CSR #customer

Other Airlines Prey on Parent Emotions Too

Delta isn’t the only airline that will book a young child or a toddler several rows away from a parent or guardian.  In my recent history, US Air pulled the same page from the airline customer service playbook, albeit my daughter was even younger then.

Although US Air’s social media team at least attempted a response – Delta didn’t so much as acknowledge my protest (and still hasn’t) [Update 5/12/15:  Delta reached out to me today; there’s a note about it in the comments below].

American Airlines also, has earned a reputation for targeting parents. My mother flew for American for some 30 years and when I relayed the story, she shook her head and noted the airline made it a habit throughout her career.

She resented it because it put her – an employee – in the crossfire of a rightfully upset parent, but left her few options to deal with it. In the spirit of adaptation, she did, however, develop her own playbook. She’d gently take the parent aside and give them advice like this:

Approach the passenger sitting next to your child and explain that while your child is sweet, she (or he) frequently becomes nauseous during air travel; I hope you won’t mind cleaning up.

More often than not, my mother reports, after hearing that, a fellow passenger would volunteer to change seats to avoid sitting next to a sick kid. I’d like to believe most people would do it willingly anyway.

Anyone that knows a flight attendant can probably attest to the fact these professionals can rattle off a dozen similar anecdotes off the top of their heads.

It does not, however, excuse an airline, or the broader industry, from what amounts in my mind, as calculated exploitation. 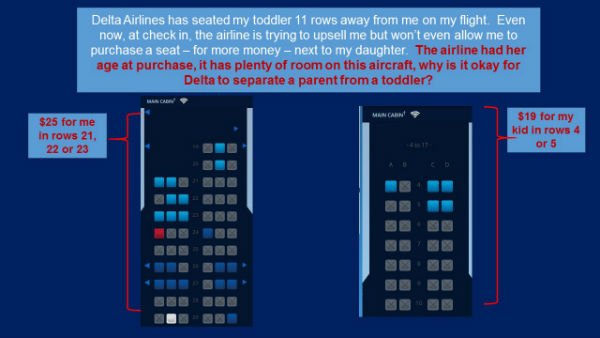 Update 5/7/15: An aviation enthusiast pointed out the image here shows two different aircraft. Exactly. Four legs, round trip. Then you begin to understand my frustration. There was no choice to select seats together upon purchase, and this image reflects my options at online check-in. What did Delta expect? That I’d spend more money for the privileged of sitting separately, with a little more leg room?

“Misery” as a Business Strategy

If such a story were the exception, it might pass as an oversight.  Unfortunately, it is not.  The airlines have been systematic in the pursuit of driving revenue by making their customers miserable.

The carriers have artificially inflated demand by cutting the supply of flights. The airlines have continuously added seats to an aircraft to the extent it borders on torture for even the average sized citizen. Airlines were quick to add fuel surcharges and very slow to remove them — despite the decline in oil prices (and expiring contracts).

Then there are the upsell techniques.  These are something akin to intrusive pop-up ads you can’t close, only it’s in-your-face real life. There’s a long list of “comforts” the airlines have carved out and packaged as an additional revenue stream:  bag fees, bonus miles, food, drinks, movies, headsets and exit row seating.

Another airline staple that fails to serve customers well is gaming departure times.  This is usually rendered in the form of closing the door on an aircraft, pushing away from the gate and calling the flight “on time.”

It’s a farce that might look good on a plaque but is about as meaningless a metric as likes on a brand’s Facebook page.  The whole charade would be downright humorous — an SNL skit — if it weren’t so egregious, true and more to the point, impacting so many travelers.

It’s not merely that the airlines are trying to earn more money – businesses should try to earn more profitable business —  it’s that these items are sold to a (literally) captive audience in an effort to capitalize on misery.  In other words, the airlines are artificially designing a miserable flying experience precisely for the purpose of selling travelers more “comforts.”

The airlines are flying so low with this strategy, it’s fitting for a child’s lesson in morality we might find in a Dr. Seuss book:  inventing a problem in order to profit from the solution.  Writing his column, McBean himself called it capitalist pollution.

Citing a story in The New Yorker, futurist, tech analyst and one-time PR luminary, Brian Solis dissected  the strategy in a post titled, Companies Profit When Customers Suffer, this way:

“See, the more a passenger hates the experience, the more they’re willing to pay incremental fees to avoid repeating it. That’s the theory anyway. These include the following uncommon anomalies some hopeless passengers may endure…

> Waiting in line to check in at the counter.
> Pushing your way through the cattle call when boarding commencing,
> Clamoring for that last overhead bin space that someone else seems to always get.
> Doing a last minute repack when you learn your bag weighs just over the maximum allotment.
> Having to push their knees against the seat in front of them to mimic a comfortable seating position.
> Tussling with your neighbor over space because seats are practically stacked on top of each other these days.
> Beg to be treated as a human being by airline representatives.
> Losing status because you fly a lot but you don’t pay premium prices for premium seats and services.

Indeed, we’ve all been there.”

As I noted in reaction to Mr. Solis’ post, it amazes me that a competitor cannot find a way to make the economics work – that a carrier can’t swoop in and displace the incumbents.  Even the formerly scrappy low cost airlines – like JetBlue – that nailed this niche are moving away from the model.

If good customer service is good marketing, then engineering a synthetically designed (and terrible) user experience in an effort to profit ought to be illegal.  When is enough it enough?!

It is High Time to Regulate Airline Customer Service

Until this country becomes willing to invest in high-speed rail (which we should), teleportation is invented, or more businesses accept web collaboration for its practicality, there’s no expectation that the airlines will ever focus on basic – even essential in Maslow’s sense – customer service. Airline customer service must be regulated.

I believe the answer begins with a federally mandated passenger bill of rights – one that becomes law and is backed with stiff penalties.  To begin, I’d recommend the following:

These metrics will be reported monthly on a publicly accessible website managed by a designated government agency (FAA, FTC). In addition, airlines that are publicly traded will be required to list a human-readable one page summary in quarterly and annual financial statements, such as the 10k. It will be the first page of such reports.

In a word of caution, when the regulators start sniffing around, the airline lobbyists press hard on the thrusters.  They will advocate for “self-regulation” and lament over the stifling new constraints and limitations.

Yet the airlines have proven time and time again they cannot be trusted to act independently. Indeed a few years back the feds finally, after crisis after crisis spilled over into social media and news, slapped the airlines with the threat of fines for parking aircraft on the tarmac while their customers endured countless hours in unconscionable conditions.

I was but a kid when Reagan broke the mechanic strike, and this sort of talk is the antithesis of the politics I’ve held for most of my life. Then again, everyone has thresholds. My threshold is 4. 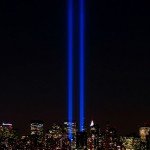 What if NYC Made WTC BASE Jumping an Annual Event?
Super Original Thinking is Required to Topple Facebook
Infographic: Facebook at 10 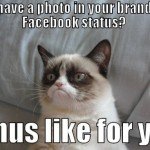 5 Things that College Didn’t Teach Me about PR

A contributed post by Sydney Holmquist College is simultaneously the longest and shortest time period for young adults. Wanting to...