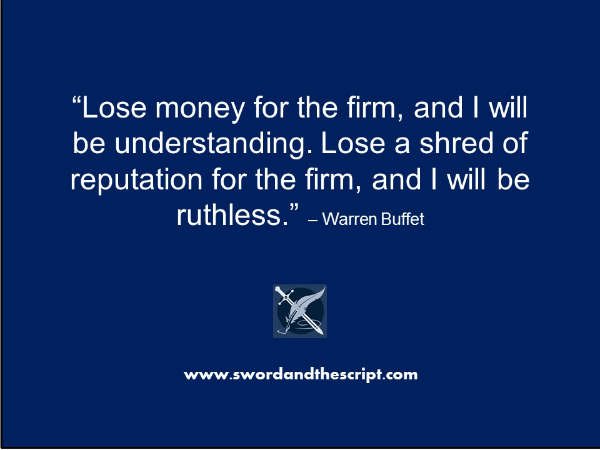 It may be hard to quantify the value of a reputation but it sure is meaningful when one of the world’s most prominent financiers says it’s important.

Reputation was a key message billionaire Warren Buffet conveyed in “biennial” memo to his leadership team – the 80 or so business people that run the subsidiaries of Buffet’s Berkshire Hathaway company.

The Wall Street Journal’s MoneyBeat blog embedded a copy of his memo which reads:

“’We can afford to lose money – even a lot of money.  But we can’t afford to lose reputation – even a shred of reputation.’ We must continue to measure every act against not only what is legal but also what we would be happy to have written about on the front page of a national newspaper in an article written by an unfriendly but intelligent reporter.”

We can understand a bit why Buffet invested in newspapers – he still reads them – and you have to admire a gentleman that can quote his old memos in his new ones without losing an ounce of cool.

He also seems to draw a distinction between an “unfriendly but intelligent reporter” who is perhaps driven by the nobility of that profession to expose some wrong doing – and the inevitability that in business, sometimes you just have bad days with bad news.  Buffet is clear that he wants to tackle bad news head on:

“As a corollary, let me know promptly if there’s any significant bad news.  I can handle bad news but I don’t like to deal with it after it has festered for awhile.  A reluctance to face up immediately to bad news I what turned a problem at Salomon from one that could have easily been dispose of into one that almost cause the demise of a firm with 8,000 employees.”

Berkshire Hathaway now employs 330,000 people according to the memo and the reference to Salomon Brothers stems a Treasury bond scandal that resulted in “the largest fine ever levied on an investment bank at the time.” The MoneyBeat blog writes:

In preparing this blog post I spent some time on the very simplistic Berkshire Hathaway website which features “A Message From Warren E. Buffett” in the top left corner.  I read it of course and as it turns out it’s a blatant sales pitch for his two companies in portfolio:

“You probably know that I don’t make stock recommendations. However, I have two thoughts regarding your personal expenditures that can save you real money. I’m suggesting that you call on the services of two subsidiaries of Berkshire: GEICO and Borsheim’s.”

Financier, PR man, crisis manager – and pitch man – this guy can do it all.  And probably in 15 minute or less.  At the time of this writing, Class A common stock in Berkshire Hathaway is currently trading at $227,720 per share.

It’s a hefty number – but by measure of the communication to his business leads – it’s merely a derivative of priceless.