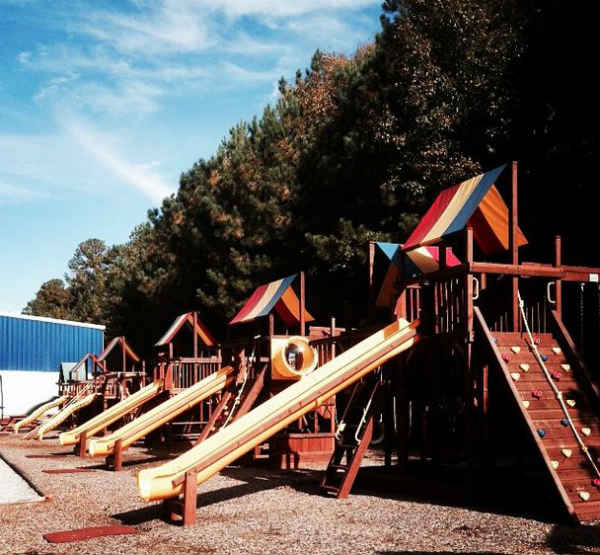 The party room rivals any I’ve seen in the local area.  It comes with four slides, a handful of forts, some bridges, a climbing wall, several swings – and enough space for a whole bunch of kids and one heck of a birthday party.

It’ll cost parents about $200 on to reserve the room for a birthday party on a weekend, though it’s less expensive on a weekday.  I can personally attest to the fact the pricing is very competitive with other options for hosting parties in the local area.  Most importantly, Rainbow Play Systems of North Carolina is more than accommodating, based on my conversations with parents and customers.

At first glance, it might seem the company is in the services industry – catering to birthday parties – but the company sells playground equipment and kids’ furniture.  The party room is pure marketing – of the genius variety – both because it ignites word-of-mouth and because it pays for itself.  There might even be a profit margin. 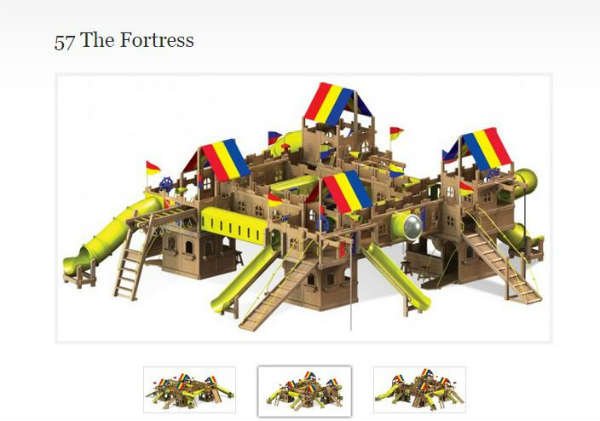 Parents that arrive at Rainbow Play Systems for a birthday party are greeted by massive display of swing sets. There’s at least a dozen on display – and for once the word “system” is not hyperbole.  These are truly magnificent displays – some of them have built in treehouses while others are made to simulate a pirate ship.

Just imagine how popular your kid would be, joked one father showing me the item in a print catalog as our kids jumped on a trampoline, if you established a “The Fortress” in your backyard. Sure your insurance costs might go up – but you could also charge admission.

As a visitor, your kids are permitted to play on the equipment. If you can get a four-year-old past the play systems and into the store – remember you’re there for a birthday party – you’ll have to walk past a gauntlet of the coolest kid furniture you’ve ever seen. The party room is in the back.

Among a wide variety of options, there are several fascinating bedroom sets that caught my attention. As we (tried to) walk past one set in particular – a sort of elevated princess castle – I was hit with five nearly-simultaneous thoughts:

When we finally make it to the party – we take a million pictures of our kids having a grand time on these very expensive play systems.  We post the photos to social media.  We tell other parents about what a great place it is for a party. And on our way out, we walk past the same furniture and play systems. 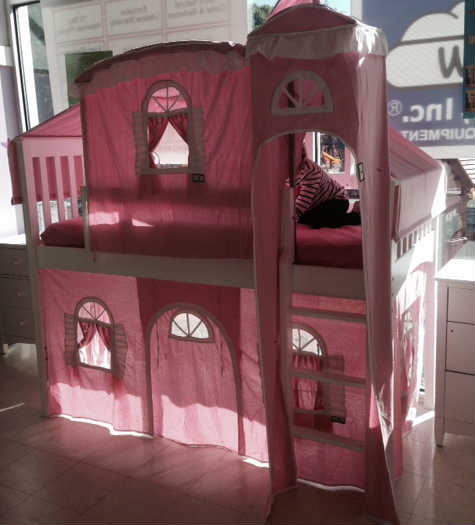 Marketing as a Profit Center

Rainbow Play Systems isn’t the only type of business to make money from its marketing, though it does take a special breed of business.

There’s a wine shop down the street that hosts “wine tastings” just about every weekend. The “tastes” are not free, but the Instagram photos are priceless.

A skydiving dropzone will charge about $100 to record your first tandem skydive, or student jump.  Those brave enough to jump from an aircraft will upload their video to YouTube and make the photos their social media profile shots.

Parked outside of a rest stop on Interstate 95, a truck carrying soda to refill soda machines, double-dipped by offering billboard-style advertising on the side. When I inquired, the driver noted the program is managed by a third party media company, which takes a cut of whatever ad space is sold.

It’s free money for the logistic company, and since the driver sticks to a designated route, the media company can wrap in demographics.

The anecdotal evidence is compelling, but most companies I know relish the idea that their marketing is even consumed, let alone earning a profit.  It’s mesmerizing to think that somehow the very function designed to build awareness, generate leads and facilitate the sales cycle, will not only achieve those things but do so profitably.

Can Any Company Market for a Profit?

The ability to do this comes requires a couple of hefty perquisites. First, the experience should be so compelling, you don’t have to ask people to share; the hashtag you propose makes them look good. Second, you’ve got to have a critical mass.  There’s got to be enough people willing to share to make an impact.

In the case of Rainbow Play Systems, it not just a single event or day, but rather the aggregate over time. Twice in a very short period of time, I’m finding myself on the brink of making a purchase.  And I haven’t spoken to a single sales person.

Credits:  Photos of the Party Room and The Fortress adopted from Rainbow Play as indicated.

Constraint breeds creativity.  It may seem counterintuitive, but the ingenuity of deftly navigating the most difficult of binds goes to...