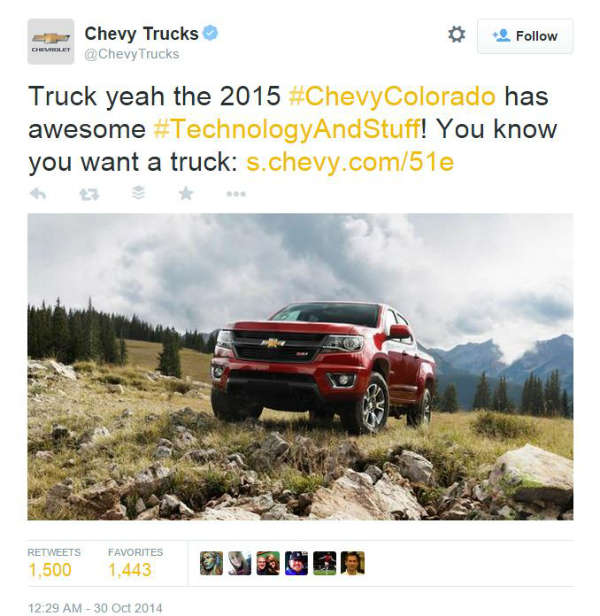 Constraint breeds creativity.  It may seem counterintuitive, but the ingenuity of deftly navigating the most difficult of binds goes to show PR is often as much about pproblem-solvingas it is communication.

Corporate crisis communications provides a demonstration because there are very clear constraints:

As a Chevy spokesperson Rikk Wilde’s job was to present a new truck to San Francisco Giants pitcher Madison Bumgarner.  As a corporate sponsor this was Chevy’s big moment to showcase some of the finer points about the vehicle they were about to handover to the World Series MVP.  It was an awkward presentation through and through, but at one critical moment, Mr. Wilde noted the new Chevy Colorado, “…offers class-winning and -leading, um, you know, technology and stuff.”

Twitter exploded and some quick thinker doing the Twitter for Chevy simply embraced it with this tweet which read in part, “Truck yeah the 2015 #ChevyColorado has awesome #TechnologyAndStuff!” Writing on the Ignite Social Media blog, Bruna Camargo gave the vehicle manufacturer good grades for its response,

“Instead of issuing some lame press release about how they’re sorry their guy couldn’t be more eloquent, they embraced it, rolled with it, and are now about to bank on it. Can’t cry over spilled milk, or Rikk Wilde’s sweat beads that surely moistened that Chevy-branded trophy. But you can, you know, make fun of yourself and stuff.”

The company is getting accolades from other reputable marketers.  Mark Schaefer, for example, called it GM’s Oreo moment.  Talk about rags to riches.  Crisis communications has changed — and Mr. Wilde should get a raise.  If there was a way to plan that — marketers would!

The video is embedded nearby — imagine watching this from the social media command center — and then tightening your seat-belt:

2. Suggesting edits to a reporter’s story.

Once upon a time there were few options for responding to a negative opinion piece in a major daily paper.  Some of these included a) contact the writer b) contact the editor c) write a letter to the editor in response.  These were all terrible options, which means picking and choosing battles was extremely important.  Today, corporations that put the time into cultivating corporate blogs, have an effective outlet for managing with crisis communications and added an option to the crisis toolkit.

When the New York Times published an opinion piece in part about Walmart, the company vigorously disputed the representation. In very creative rebuttal posted to Walmart’s blog titled, Fact Check: The New York Times “The Corporate Daddy”, David Tovar, then a vice president of communications with the company, offered edits to the Times’ writer’s “first draft.”  A few days later, the Times allegedly refused to publish a letter to the editor submitted by the company, which instead published on its blog.  This was a brilliant move and it’s a response well worth adding to the tool kit.

Late Friday afternoon used to be the best time for corporations to release bad news.  The hope was reporters were more focused on getting on with the weekend and by Monday, well, the news would be too old to cover.  I don’t think that’s the case in the tech-driven era we live in – anytime is a great time to publish a juicy story.

So what’s the alternative?  Release the bad news when something else big is going on!  While a few outlets caught on, it probably could have been a lot worse. The Huffington Post was one of those outlets and published a story titled Snapchat Conveniently Announces Legal Settlement During iPhone 6 Launch.  In the article, associate business editor, Alexander C. Kaufman, wrote:

“The timing of Snapchat’s announcement suggests that the company may have hoped news of the settlement would go unremarked. The company sent out its press release about the settlement at 1 p.m. EST — coincident with Apple’s big product launch event, which dominated the technology and mainstream press corps’ attention.”

As a business, Yelp both creates and makes news.  From my vantage point it seems the company is essentially in continuous crisis mode over this issue:

“Yelp denies filtering reviews to allow a more positive or negative slant depending on whether or not a business is a customer of Yelp.

A while back, Inc. Magazine ran this article – After 10 Years, Yelp CEO Reviews His Own Business – and the play on the word “review” struck me as creative. It’s proactive and counters a continuous theme rather than reacting to a specific headline.”

Indeed, the article was written by Michael Liedtke a long time tech writer for The Associated Press, which assures wide distribution include on Inc.com, which I might add, is a sweet spot for Yelp.  And it seems Yelp CEO Jeremy Stoppelman does, in fact, use his own product:

“Q: Do you still write reviews yourself?

A: I do. I just did three or four today. I am at 1,214 reviews as of today. I was on a trip in Aspen, and I just gave a one-star review to this French restaurant. They gave us a hard time. We actually had to walk out. I didn’t even get to the food.”

In these examples, we can see tenets of crisis communications applied in a modern era where news cycles are accelerated.  Chevy embraced a story while Walmart refuted another.  Timing was factor – reactive and proactive – in both the Snapchat and Yelp example.  Putting all these together provide additional creative PR options for managing crisis communications.

The story is everything, but conflict is everything to the story. So says Kevin Spacey who was the key note...