Home > Marketing > Small Business Negative Reviews are a Gift; Here’s What to Do

Small Business Negative Reviews are a Gift; Here’s What to Do 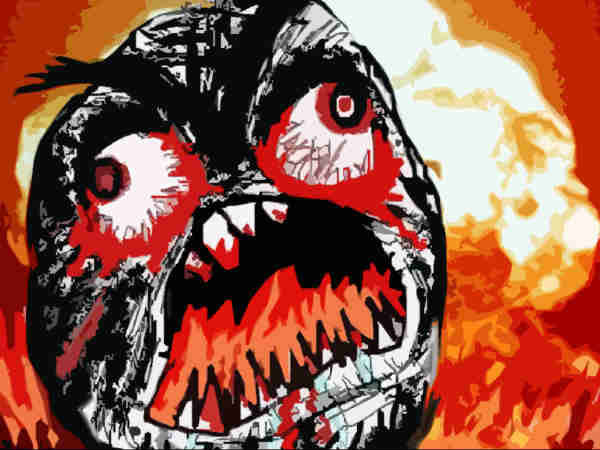 She was unhappy with a small businesses service, so she left a negative review.  She gave the business two stars in Google.

The business owner was outraged by the review. “You will be hearing from our attorney,” he allegedly wrote in response.

And there, in just a few paragraphs, one negative review went from zero to sixty in a game of chicken that isn’t likely to benefit the business.  It’s generally not a good idea fight with customers, let alone angry ones, and it’s downright dismal to do it in public.

Sure, such a public debate might draw attention, but it’s certainly not desirable attention. Even if a case winds up in court and the small business wins, it still loses.  It’s called the Streisand Effect, which The Economist sums up as follows:

“Named after the American singer and actress Barbra Streisand, the Streisand Effect describes how efforts to suppress a juicy piece of online information can backfire and end up making things worse for the would-be censor.”

The noise aside, there are plenty of other reasons to get over it and move on. There’s the psychological and emotional toll, the sheer business distraction, and in event of an actual lawsuit, the attorney fees.  Finally, at the end of it all, there’s current and future customers to consider:  Who would choose to do business with the company – amid an ample supply of competitors – that sues its customers?

But we are right and the customer is wrong

Maybe it’s the case that the small business is right and the customer is wrong, but it’s very difficult to prove an opinion wrong.  An opinion is just that: an opinion.

Small businesses are especially prone to this sort of visceral reaction to negative reviews, because the business is often a reflection of their life.  Often small business owners have taken huge risks to start the company, poured countless hours into it, and made incredible sacrifices.

A small business owner that has gone from nothing to something, may feel a range of emotions when one customer comes along to seemingly ruin it all. The small business owner is stuck on what’s right and wrong, “But we are right!” he or she might exclaim in exasperation and vowing to go after the reviewer.

It may be true.  You may be right, but it doesn’t matter; everyone won’t see things through your lenses. A better solution is to address the matter and get back to business as soon as possible because you have other customers to serve.

Quoting from a contributed article in another publication, a Wall Street Journal blog cited Josh King, a lawyer and the general counsel for Avvo, which in part, provides a review site on lawyers.  He said, quite eloquently:

“The trick is to not get defensive, petty, or feel the need to directly refute what you perceive is wrong with the review. It’s far more effective to think of future readers when writing the review, rather than the original reviewer.”

A few negative reviews can even be helpful

In a childhood fable, an emperor walks around naked because the staff – and people – are too afraid of insulting him or raising his ire.  As a result, he runs around in the buff believing his own little fallacy because he created an environment where feedback was unwelcome.

Feedback, even in the form of a negative review, is a gift. It’s a chance to make an evaluation, a change – or to validate the current direction. No leader, small business or otherwise, can effectively lead people, an organization or a business without feedback. Those negative reviews are special gifts.

Rest assured I’ve had plenty of experience with negative reviews with a grain of language and viciousness that would stun most people. Nothing takes the wind out of your sails like a trying exchange with an outraged customer.  Beyond experience, there’s a wealth of research data to support the idea there’s a better way to respond than with outrage:

Even if a good faith effort to respond to publicly respond to a negative review goes sideways, or worse, south, every other customer or prospect that sees that review, will see the response as well. 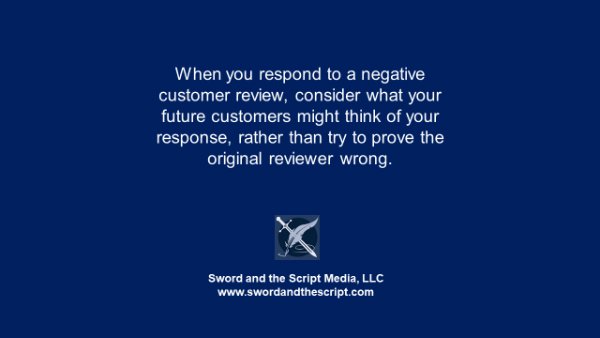 How should you respond to a negative review?

Respond with a sense of humanity and try to solve the problem – an offer to do the work again, a refund, a discount – or in some way demonstrate that you’ve heard the issue and are working to address it.

Most people – customers – will be blown away by the fact the business takes their complaint seriously. True, it won’t always work out and business can develop persistent detractors, but over time, people will come to see those for what they are – unfounded rants.

Phil Buckley, a Raleigh-based SEO, who has had his own experiences with negative reviews, and who is curating, perhaps even mediating the story at the beginning of this post, sums up a sound response metaphorically.

“I’m sorry your experience wasn’t as good as it could have been, it’s my fault. I personally strive to make every customer experience on they’ll remember and recommend to their friends.

I’ve already refunded the amount of your purchase and if you email me your mailing address I’ll make sure I send you a gift card for you and some friends to give us a chance to redeem ourselves.

Let me know if there is anything else I can do.”

by Frank Strong Dr. Seuss once asked, “How did it get late so soon?” People invented the concept of time,...