PR Pros learned to Drink Coffee from a Goat 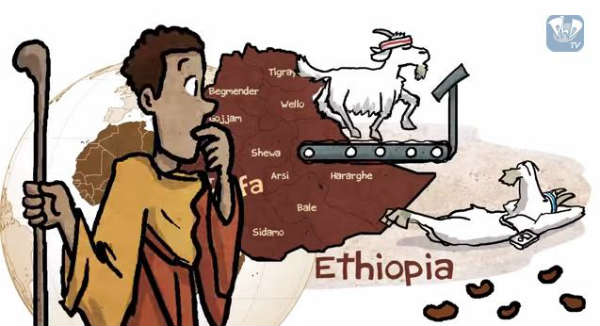 Son of a goat!  It can be the ultimate slur, or simply an expression of surprise, which is the case here. Who knew we learned to drink coffee from a goat?

It’s true according to the video embedded nearby, which I first spotted on Visual.ly and attributed to PhD Comics.  The reality is, comics are hard to take seriously, unless they have earned a doctorate and taken a long view of a daily habit.

Allegedly a goat header in Ethiopia observed his goats were rather spry after eating coffee beans.  Add water, boil, and the rest is history.

The video is less than 90 seconds long:

The lesson for PR is clear as coffee:  If your goat makes an amazing discovery, you won’t need creative PR ideas a few hundred years later when someone decides to include your story in an internet video.

PR and its coffee

Where would PR be without its coffee? A quick Google search shows at least three agencies make a reference to coffee, or the active ingredient in coffee, in their name sake.

The industry trade publication, PRNewser, has a writer named for the drink. Or maybe the drink is named for him. And then there is this:  PR pros are crazy (for coffee).

How’s that for proof?  Except that coffee isn’t measured by proof.  Perhaps PR is, but then this is part experiment, part idea stream, and part urge to mix up my typically serious tone.

I wrote this on the 12th, and edited it late on Friday the 13th, which also coincided with a full-moon.  It’s a coincidence that can’t possibly happen again until 2049. I might have gone too far, but  most posts about coffee,  or goats,  are already stretching for a reach.  Blame it on Jack Steiner.

Coffee works its magic not by “stimulating the brain” but by “suppressing the part that makes you drowsy” according to the video.  The drowsy record for going without sleep was set in 1964 and lasted 11 days and 24 minutes.

I’ve never had an urge to compete with such a record, but I’ve read, and proven in my own unscientific experiments on myself, that our bodies get accustom to methods of ingestion.  For example, your body will form a resistance if you only ingest caffeine by way of warm liquids, like coffee.

The remedy, then, to suppress the part that makes us drowsy?  Mix it up. A cold can of diet soda is a great way to sneak an extra dose past the mental gatekeeper. No, that wasn’t a wink, it’s a sure fire way to ensure your eyelids tweak out.

PR as army on caffeination

Napoleon supposedly said an Army moves on its stomach, but a full tummy is a proven path to drowsiness.  I’d suggest to the general it moves much faster on a combination of Motrin and caffeine and perhaps a tinge of hunger, but not calorie deficient.  I’ve found the same to be true in PR, without of course, the blisters.

Legend tells us the drip campaign originated from the drip, drip, drip of a caffeinated IV. Caffeine is proven to improve concentration, and concentration can spawn dripping creativity.

If you skip to the bottom, you’ll realize, this isn’t the first time I’ve published something about PR and goats. But coffee is indeed a new angle, fitting for a weekend share I suppose, because together, my fellow PR pro, we learned to drink coffee from a goat.

How a Period Begins a Conversation; Off Script #8:  Mitch Joel

The period used to be the end of the story. Today, it’s just the beginning. In many ways Mitch Joel...