Is LinkedIn Becoming a Spam Paradise? 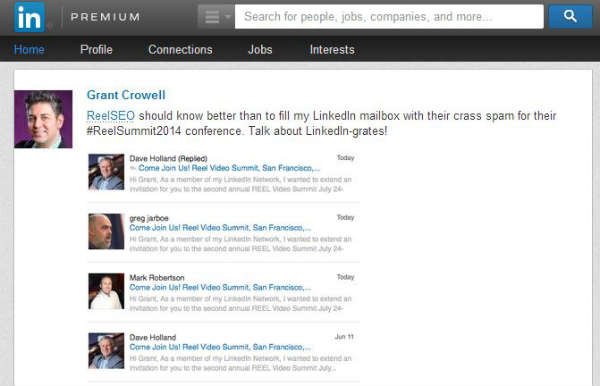 It was the same message sent four different times, from three different people, including Greg Jarboe, co-founder of the marketing firm SEO-PR.

“LinkedIn is about making real connections,” he said in a message complaining to ReelSEO posted to Twitter.

The response to that complaint from the official ReelSEO Twitter handle was dismissive, “Opt out – it’s that simple.” 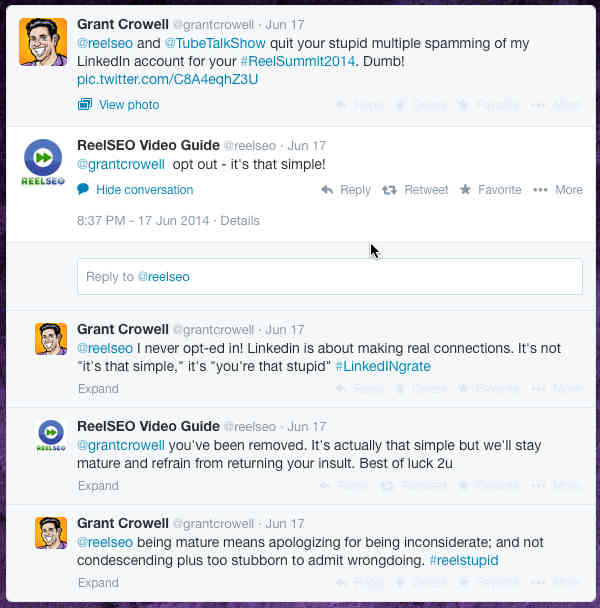 Opting out of LinkedIn Spam is Not Simple

An apology or a mea culpa may have been far more appropriate than a dismissal because opting out of LinkedIn spam is not simple.  The only certain way to avoid LinkedIn spam is to remove those connections that send such messages.

In the last month or so, I’ve received an increased volume of spammy messages from LinkedIn connections. One person started a new company and added my professional work email to his new company newsletter. Previously, I had exchanged messages with that person on my personal email and even consulted with him by phone when he asked me for help in mulling his next career move.  No good deed goes unpunished.

In another example, a connection sent me a pitch for a brain cancer charity for which he was fundraising.  The message was also sent to my work email address, which I’ve never given to that individual.  That person did not respond to my reply asking where he got my work email address from, but I’m fairly confident he got it from LinkedIn (I’ll show you why in a bit).

For those that would slap me with a curmudgeon label, I lost my father to brain cancer in 2003 after a very long and complicated medical history.  I’m sympathetic to such charities and frequently donate when friends make personal requests for donations. However, I resent getting unsolicited messages at work, and even more so when it’s from people that only contact me when they want something.

Scraping email addresses from LinkedIn connections and adding them to a distribution list is not an “opt-in” mechanism.  The only viable option for “opting out” is breaking that connection. 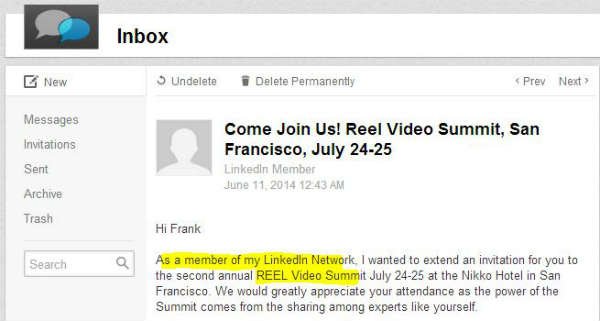 This screen shot appears to be from a “LinkedIn member” rather than Mark Robertson as it originally displayed because I’ve removed Mr. Robertson as a connection at the time I took this screenshot.

“Similar to junk mail you receive in your mailbox, spam is the electronic equivalent. Spam includes unsolicited marketing emails typically sent in bulk from a source that you don’t have a previous relationship with, with the intention of advertising goods or services. You may come across a small amount of spam on LinkedIn via one of our communication channels, such as member-to-member messaging, group discussions, or network update feeds.

Some of this inappropriate behavior may range from an unwanted message to calculated spam campaigns. Regardless of the extent, LinkedIn is a professional networking site and we expect members to keep all content professional.”

ReelSEO also sent me four pitches – once through LinkedIn and three by email.  The first two were from Mr. Robertson and went to my LinkedIn and personal email accounts respectively. The second two went to my work email and were sent from “Jessie Spiers On Behalf of Mark Robertson.”

I do not know a person named “Jessie Spiers” – and though I was connected with Mr. Robertson on LinkedIn, I have never given my work email address to him or to ReelSEO, which may mean he passed data from his contacts to a third-party. If this is in fact what Mr. Robertson has done, it may be in violation of several clauses in the LinkedIn User Agreement , including, (section) 10. LinkedIn “DOs” and “DON’Ts.” which states:

15. Rent, lease, loan, trade, sell/re-sell access to LinkedIn or any information therein, or the equivalent, in whole or part;”

I probably would have let this slide by without further thought, but two things happened. First, I noticed Mr. Crowell’s post on LinkedIn about the same issue and more importantly, observed ReelSEO’s dismissive response.  Second, when I asked Mr. Robertson directly about the issue on Twitter, he was, in my opinion, evasive and haughty. 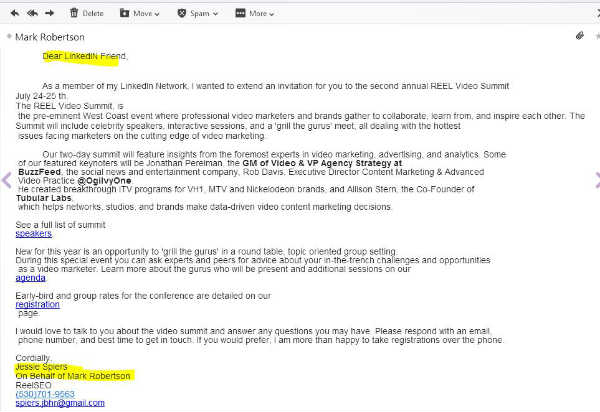 Over the course of several years, ReelSEO has grown from a niche blog, to a reputable and useful media site on video marketing.  More than once, I’ve heard or seen Mr. Robertson interviewed by national media outlets for his expertise. To be clear, I have admired what Mr. Robertson and ReelSEO has been able to accomplish by earning attention with hard work and insight.

That he’s attracted notable experts, like Mr. Jarboe, who is a frequent speaker at SEO and PR industry events, including PRSA, has only added to the site’s credibility.  I’ve met Mr. Jarboe a time or two in person and have read countless articles or blog posts he’s written.  He’s always struck me as the epitome of a “gentleman” with incredible experience.  He was among the first – more than a decade ago – among influential voices in PR pointing out to a laggard PR community that Google was the new front page.

Mr. Jarboe didn’t respond to my messages to Mr. Robertson on Twitter, in which I included him, but I’d be floored if he realized the extent of how his name is being used.

This is what is so shocking to me about this debacle:  The site has stooped to new lows in pursuit of leads. Instead of apologizing and being done with it, Mr. Robertson waived his online badge of influence and dismissed the people that are ostensibly too little for an admission of fault, but not too little to send a sales pitch. 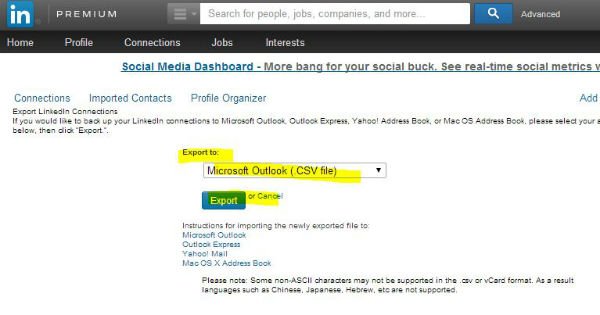 How to Use LinkedIn to Outsource Mass Emails

As a platform, LinkedIn is treading on thin ice. It’s added “Pulse” which is the article discovery engine users see when they log in to their accounts.  From my vantage point, Pulse blocks users from seeing content from their connections, and it’s a rare that Pulse ever recommends content in which I’m personally interested.

The flag alert too is bordering on spam.  This notification flag used to turn red to alert users about activity on a post they had interacted with.  Today, it lights up anytime someone in their network publishes an article on the LinkedIn Publishing Platform; the “blitz” is annoying users.

There’s another trick to LinkedIn that’s solely in the power of its users – and it’s also how I believe Mr. Robertson, and others as noted above, enabled Jessie Spiers to send unsolicited pitches  to contacts on his behalf:  the export contacts feature.

As the screenshot nearby demonstrates, LinkedIn allows users to export contacts to a spreadsheet. It’s a simple tool that puts the names and emails of all of a user’s contacts into a database which can then be uploaded into an email marketing tool, or used to run a mail merge from a desktop.

I could, for example, email a link to this post to the 800 people I’ve connected with on LinkedIn; I would never do such a thing. Mr. Robertson would not receive that email since I’ve removed him as a contact in order to avoid future unsolicited conference invitations.

In the spirit of Mr. Crowell’s words at the beginning of this post, the promise of social media was to make real connections. To that end, Mr. Robertson, I sincerely hope your event in San Francisco is well received and wish you continued success with ReelSEO.  If upon further consideration, you decide an apology is merited, it’s rarely too late publish one.

Disclosure:  In 2012, Grant Crowell was a one-time guest author on this blog: Can PR Support Thought Leadership? (Or Are They Mutually Exclusive?)

Improve Marketing ROI 700% with this One Weird Trick!

There’s one weird trick that can solve all of your marketing problems. It’s a magic bullet that’s so incredibly effective,...