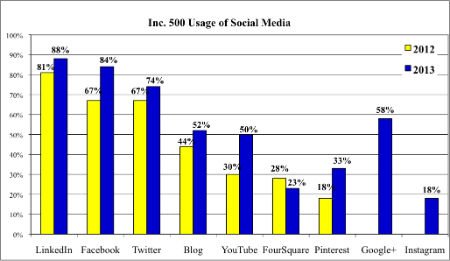 UMASS Dartmouth Center for Marketing Research is out with new research as part of its long standing study of business and its relationship with social media. The Center has been publishing research focused on either the Inc. 500 or the Fortune 500 since 2006.

I’m partial to the Center’s research because it includes some academic rigor – that is more or less absent an agenda. The current study focuses on the Inc. 500 and is a two-step methodology of reviewing use-cases and later conducting surveys by random sampling.

Key findings from the UMASS study

In their own words, the researchers conclude:

Twitter is seen as having the most potential for increasing sales growth.  The sites 140 character limit, promoted tweets based on conversation and interest and growing popularity among young consumers are all attractive to the 2013 Inc. 500.

Here are 13 statistics that stood out for me: 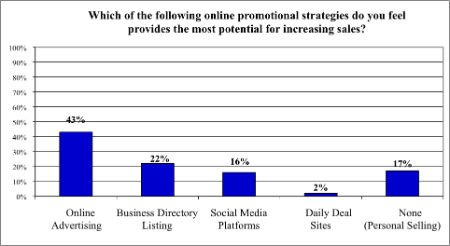 In reading through the study, considering previous reports, and my own experience four key takeaways came to mind.

1. Social sites ebb and flow. Despite the media compulsion to label Google+ a ghost town, a majority of Inc. 500 companies are on the social network – there are more Inc. 500 companies on Google+ than there are Inc. 500 companies blogging.  Contrast this with just about one-fifth of these companies on FourSquare, which a few years ago was a media darling and a must have social site, especially for businesses with brick-and-mortar retail locations. Most socially savvy marketers will advise engaging on the platforms where your customers already exist – that’s still good advice – but don’t pin all efforts to just one platform:  It may not be here tomorrow, or at least, it might be a less popular site.

2. Blogging remains an untapped opportunity. The benefits of corporate blogging are well documented. Does every company need a blog?  Probably not.  However, any company with growth plans, like those on the Inc. 500 would be better served by blogging:  Blogging is the center of the corporate social media framework.

3. Social sales objectives still misaligned. There’s a pervasive misconception that social media sales is simply a matter of showing up. It’s as absurd an idea as thinking one can show up to a physical networking event and close a deal with first meeting people, getting to know them and understanding their needs. It’s not going to happen because people don’t like to be sold to — especially when we’ve barely even said “hello” yet. Social media is just one way to talk to people – to facilitate conversations between brands and customers. Offer something smart and prospective customers might begin to trust a brand enough to consider their products.

4. Advertising blurs social media.  One question I had as I read the study, was how many of the 43% who said online advertising had the most sales potential, were using social media advertising. Are these companies distinguishing between traditional banner ads, search ads and social media ads? I doubt that they are – and further for most companies – I’m willing to be social media ads haven’t even entered the idea white board yet. Like native advertising, social ads are blurring the lines yet, this may be an opportunity for some companies to get a solid head start on the competition.

What would you add?

I’ve followed the research produced by UMASS for some time; here are some of related posts stemming from previous studies:

How to Rank in Search Engines Made Simple [Infographic]

If there’s one thing that matters in search rankings, it is backlinks.  A backlink is when one site links to...