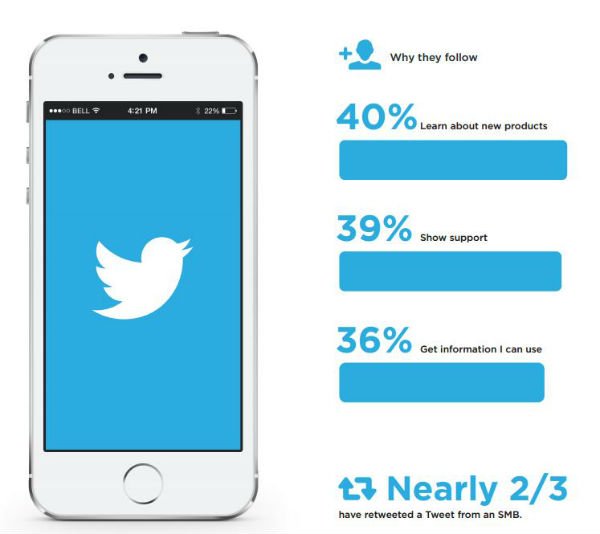 Conventional social media wisdom says people don’t like brands on Twitter – which in part explains the movement for humanization. Contrast that with “personal branding” and we indeed live in strange times where brands strive to be human, and people strive to be brands.

Whether it’s the humanity or branding, there’s something inherently likeable about small business. Clearly there’s a lot to like – according to the Small Business Administration, small business makes up more than 99% of employer firms in the U.S. and provide for nearly half of all private sector jobs.  A new survey by Twitter – Small Business Customer Insights – says small business socially likable too.

Twitter commissioned a survey by DB5, a brand research consultancy that survey 1,000 U.S.-based Twitter users with monthly active accounts about their perceptions of small- and medium-sized (SMB) business. SMB is a nebulous term, which DB5 defined explicitly as “any business that isn’t a large corporation,” though the broader description led me to conclude it means local small businesses.

The survey has one overarching finding: Twitter is a good place for small business to do business. The research clearly intended as a proof point for Twitter’s advertising offers, but it also highlights some interesting data:  People that follow SMBs on Twitter and are “genuinely interested” and loyal fans of small business that are surprisingly inclined to make a purchase. 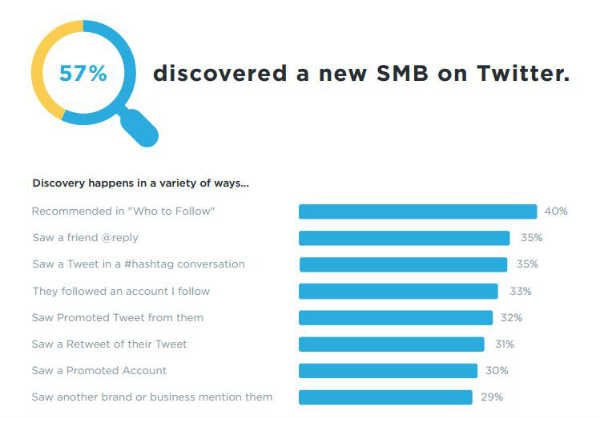 The survey is a quick read and some of the questions offer more detailed answers, but in reviewing it for myself, here are ten data points that stood out for me:

5. Transactions. 60% have purchased from an SMB after finding them Twitter.

6. Repeat business. 36% have made multiple purchases.

8. Room for many. On average, respondents say they follow around 21 SMBs.

On the side, I occasionally help small businesses with marketing advice and coaching. Many of these businesses that I either frequent, friends with small businesses or business owners I’ve met through the course of my career. In light of these experiences – in knowing small business, my own experience and this survey, I’d offer these three takeaways.

1. Twitter is a great place to engage. There are some 600,000,000 accounts on Twitter of which about one-third are active monthly users. It’s not the largest social network but people on Twitter tend to be socially connected online and offline.  By this I mean the Twitter users that are relevant to a small local business tend to be prolific – they blog, share photos and take great pride in sharing information. Content easily skips from one social network to another which means a connection an SMB makes on Twitter can easily have an impact on another social network.

2. Twitter requires considerable effort. For small businesses owners that find social media to be an overwhelming task – I typically advise them to focus on other social networks, or foundational marketing such as email. The reason for this is Twitter requires daily engagement to make connections and build relationships. Fans on Twitter expect instant responses and so I find it’s better suited to those business owners that enjoy social networking and engage out of a passion for the medium.  With any social network, a good framework for deciding on which platform to focus is to first determine where your fans are now.

3. Twitter ads are worth an experiment. I’ve had a chance to experiment quite a bit with Twitter Ads both personally and professionally and across several companies. I’m optimistic on promoted tweets (as opposed to promoted accounts) as a cost effective way to reach people.  Typically I find engagement rates in the ballpark of 3-4%, which when compared to email or pay-per-click search ads, is pretty good. However, just like organic engagement requires effort, Twitter Ads require a commitment of time to experiment – with both the content in tweets and the content produced to accompany those tweets. It’s not a panacea, but with a little trial and error, it can produce tangible results.

What would you add?

Infographic: Big Brands and the Evolution of Logos

by Frank Strong Wikipedia says the word “logo” is derived from the Greek word “logos” meaning word or idea. The...