Forrest for the trees? Not one story in Google News search about Tweetoro — the online stock trading company with a promoted tweet the day Twitter went IPO.

It would seem to me that a creative PR idea for a company that allows people to trade shares online, would be having the foresight to place a promoted tweet on the day Twitter launched its IPO.

The surprising fact however is none of the big electronic trading companies were on point. Companies like Charles Schwab, TD Ameritrade and E*Trade, who should have all over this opportunity were not.

Instead, a company we never heard of, with 258 followers on Twitter, called Tweetoro, was savvy enough to purchase a promoted tweet on Twitter’s big day.

There must be a gazillion news stories about this company, right?  Nope.  As the screenshot of Google News shows nearby not a single news story about Tweetoro.  Not one. 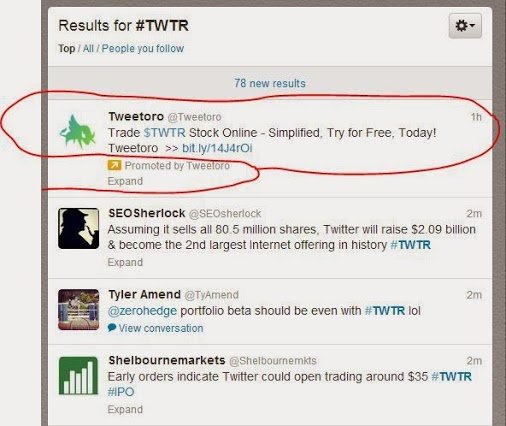 The 70% Gain Versus the Value Proposition

This is absolutely astonishing.  The media reported that Twitter’s stock soared 70 percent on its first day of public trading and paid no attention to the very story staring them in the face about how Twitter actually plans to make money.

And that 70% gain?  It’s a complete farce. Twitter (NYSE: TWTR) opened trading at $45.10 per share. The only people that made a gain of 70% were Wall Street insiders.  The retail investor – or anyone on the secondary market – never had a hope of getting in at the original price of $25-$28 per share.  It’s the difference between buying into a company valued at $15 billion and one valued at $30 billion.

Remember Google’s IPO?  It was an auction that upset the Wall Street insiders as the stock went out the door at $80 a share.  Any one following the GOOG today knows, that stock is trading north of $1,000 per share.

How is it possible not a single reporter spotted this story?  Tweetoro, an Israeli-based company, isn’t completely unknown.

According to TechCrunch the company has raised $30+ million in venture capital.  The company has facilitated some 50 million trades which financial news organization Bloomberg covered.  More recently, the Financial Times reported on Tweetoro and Twitter’s effect on the market. This company is not un-vetted.

Its social media presence isn’t all paltry either.

The company’s blog posts are frequent, although the datelines cause me to pause. The company has some 600,000 fans on Facebook and gets quite a bit of engagement on its posts. Add in some 3,000 people have the company circled on Google+, 8,000 subscribers on YouTube (and some videos with 500k views) and about 1,700 members on its LinkedIn Group and we begin to get the idea this company isn’t unknown at all.

So what does it do?  It’s crowd-sourcing for trading online.  Think of it this way:  you trust your friends and family for purchase recommendations more than the media all the time, why not add what stocks they are buying?  Tweetoro is a social network specifically for stock pick recommendations.

Oh, but the Caveats!

To the skeptics that might sound like a breeding ground for fraud, right?  Think about that sentence again, only imagine Ian McDiarmid reciting that line.  The site is crawling with words like “forex” and other terms that make a spam filter err on the side of caution.

The office locations are sketchy too – the company lists its locations as the British Virgin Islands, Cyprus, New York and Sydney.  I’d worry about the scandalous affiliations about three of those four locations – and Australia isn’t one of them.

Any time money is involved there’s the potential for fraud. Fake news releases, email scams and fraudulent investment phone calls are staples of the industry – and that’s partly why financial communications are so heavily regulated.

Who do we believe more?  You neighbor that’s a stock trader on Tweetoro or Mad Money with Cramer?  Or maybe we believe that young journalist reporting to the retail investor who finished the first day of trading at a loss he or she is actually up 70% . If Twitter is looking to profit from its real time marketing platform of Super Bowl Oreo fame, then promoted tweets on the day of its IPO strikes me as a pretty important financial news story. #JustSaying. 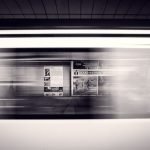 I don’t remember when I met John Barnett, but I’m pretty sure I know where I met him.  We met...