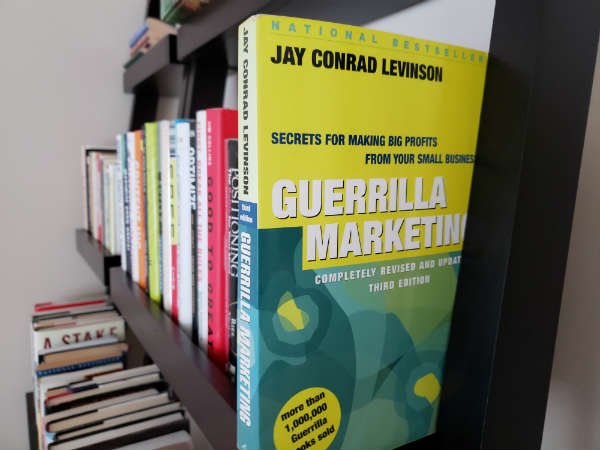 The copyright in this edition is 1998, but I probably didn’t buy and read the book until 2000 or 2001. It was the 3rd edition of a book first published in 1984. A client of mine had hired the author, Jay Conrad Levinson, as a spokesperson in support of a new digital product for small business marketing and I thought I should read it.

More recently, I learned, that the ‘Father of guerrilla marketing,’ passed away last week.

Seth Godin wrote him a fitting thank you note.

“Jay helped invent the idea of the modern marketing book, pioneered Guerrilla Marketing (which has nothing to do with gorillas and everything to do with thinking independently and bravely) and influenced several generations of leaders.”

Jay’s book “Guerrilla Marketing” still rests on my bookshelf.  After learning he had passed, I took that book off the shelf and noticed there were six tabbed pages, that I must have folded over long ago.

The following is from the highlighted sections on those tabbed pages: 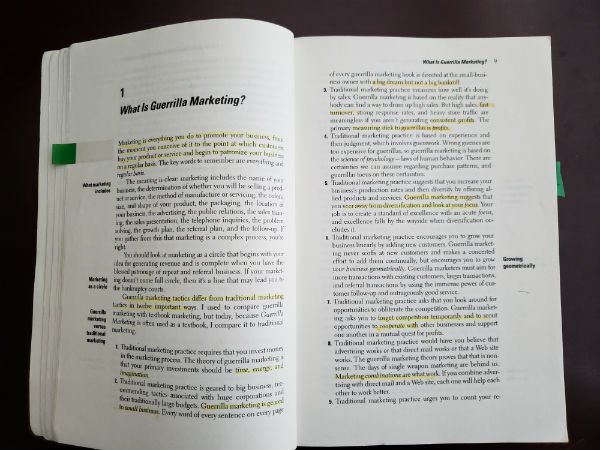 1. Page 8: What is Guerilla Marketing?

“Marketing is everything you do to promote your business, from the moment you conceive of it to the point at which customers buy your product or services and begin to patronize your business on a regular basis…the theory of guerrilla marketing is that your primary investments should be time, energy and imagination…guerrilla marketing is geared to small business…forget the competition temporarily and to scout opportunities to cooperate with other businesses…marketing combinations are what works.”

Comment: What a force it would be for a large company that marketed its products and services like a small company.

Comment: What if we changed the word “ad” to “tweet” or to “blog post.” No these are not the same, for sure, but my comment isn’t meant to be a comparison of mediums, but rather a thought process of how messages are received.

“Each and every day, Americans are bombarded with approximately 2,700 advertisements and marketing messages. In one study, a specific advertisement was shown on TV once a week for thirteen weeks. After thirteen weeks, 63 percent of people survey remembered the ad. One month later, 32 percent recalled it. Two weeks after that 21 percent remembered it. This means that 79 percent forgot the ad after six weeks.”

Comment: This was more than a decade ago. How many messages do people get “bombarded” with today? And what is the recall rate?

“If you feel you must have a toll-free number, we warn that if it spells out a word, people probably won’t write it down because they figure they’ll remember it. The truth is, they won’t.”

Comment: In part, my client at the time I bought the book was selling toll-free vanity numbers, so this was an important section to me then. However, the point is still an interesting one in that what we as marketers do with the intention of making it easy for customers or prospects to connect with us, might have the opposite effect.

“Soundbites are ideas expressed simply and briefly. The concept was spawned for the political process by public relations pros, who are called “spin doctors” by the media. This is based upon their ability to give the proper “spin.” Or public perception to the activities of the firms they represent. Spin doctors can create the perception that an oil company is a group of ardent environmentalists…as a guerrilla, you can be your own spin doctor. Select your own soundbites from the [a self-made] interview for your marketing. It’s important to remember that trust is the key – you never want to be perceived as a spin doctor; you only want to put the right “spin” on your marketing.”

Comment: Since Jay was an adman that in fact once did advertising work for a cigarette manufacturer, I’ll forgive him for the “spin doctor” label. When we get past that and realize, what he’s doing is teaching the small business owner how to do content marketing.

“A large number of business people, 71 percent as I write this, feel overwhelmed by the number of messages that they receive. We’re talking E-mail, voice-mail, pagers, faxes, cellular phones, care phones, overnight delivery, and snail mail. This communications blizzard diminishes quality thinking time, forcing people to work weekend and evenings. They fight back against overly aggressive communicators by not responding.”

It appears his daughter is managing Jay’s social media accounts now, and she is giving us a glimpse of something that will increasingly become more prominent: what happens to these accounts after death?

“A beautiful man, father, free spirit made his exit gracefully and peacefully to the next adventure. He inspired me and most likely you as well. He knew that in order to know you he had to be in the moment, the here and now and that’s what he did with every person who came into his life. Please leave your memories or how he inspired you here! Amy Levinson, his loving daughter.”

Rest in peace, Jay Conrad Levinson. He was 80.

Ask a reporter what’s change in journalism the in the last few years and many of them will mention more...