Home > PR > Why Reporters Should Check Out Google+

Why Reporters Should Check Out Google+ 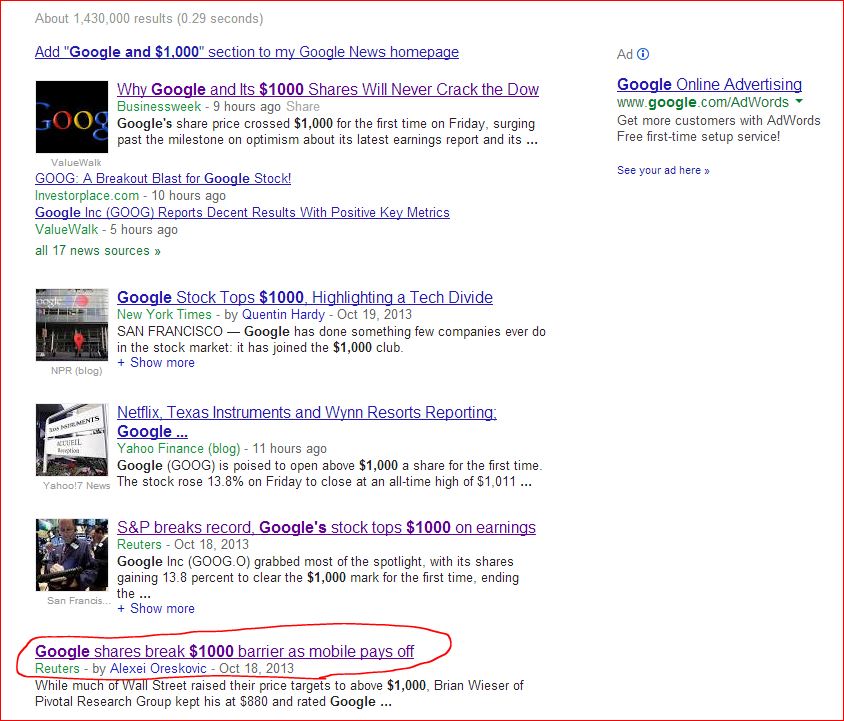 I’ve been thinking about a blog post about Google’s $1,000 victory over the stock market.  I’ve got a different angle in mind, but also did some (news) searches tonight to see what else had been written. My search terms were fairly straight forward, “Google and $1,000.”  The results of that search are shown above.

As I scanned the list of results I noticed this result from Reuters for two reasons.  First, Reuters is a financial news outlet and I was specifically seeking financial analysis. Second, I noticed the byline: Alexei Oreskovic.  The name seemed familiar so I clicked the link to read and that’s when I noticed it.

This Reuters article wasn’t just by Oreskovic but was co-written by Soham Chatterjee.  However in my news search, Google was only giving credit to Alexei.

Why? It’s likely because Oreskovic also has a Google+ profile (though it does not look to me like he has implemented authorship). By contrast, Chatterjee does not have a Google+ profile, at least not one that appear this evening in a Google news search.  So on co-written articles Google is likely to favor bylines by reporters that have established profiles in Google+.

Favor is probably a poor description. One reporter has identified himself to Google through Google+ and the other has not. The opportunity to do so is equal.

It Matters for More Reasons than just Ego

Who cares?  Journalism isn’t for fame or fortune; it’s the fourth estate.  Maybe The Economist has it right: bylines don’t fit in team sports. On the other hand, perhaps no Google+ profile is in silent protest for the perception of heavy-handedness.  It’s a protest that will surely grown increasingly silent.

Silent because Google isn’t just returning results to queries simply because a story is great,  it’s published on a reputable media site, or the article is factually accurate with great interviews. Sure those things count, but there’s more going on here.  Google is returning results based on relevance. Agnostic search results are long since gone.

What does that mean?  It means Google knows I know Oreskovic.  Or I have read his content.  Or have followed his work in some way shape or form.

Perhaps Google understands the relationship link through another connection on Google+.  For example, it lists three people we have “in common” which includes Danny Sullivan, whose work I have watched closely for many years, and Don Martelli, who I first got to know from Technorati.

I may not remember how I know Oreskovic …but Google’s algorithm does.  As a consequence, because of what Google knows about me, it’s returning search results for that very reason.

Couple this with the fact that most web traffic still comes from search.  Not just by a little bit…but by a lot.  For most sites, the majority of traffic isn’t coming from social media sites.  While these sites can certainly pass a lot of traffic, especially if something gets hot (and journalists should definitely strive to cultivate their own social communities), but on the whole, Google search is still the dominant source of traffic.

Not just Reporters but Entire Publications

What would be the impact on search if a publication made Google+ — and Authorship a matter of policy.  What would that do to the search results and subsequent traffic of say…The Washington Post?

Tonight I had an observation about a reporter, bylines and news search. If I wrote a similar post about why marketers should look at Google+ I’d probably call it a game-changer.  Both industry are about content, and no matter what side of the pen you are on, you work needs to be found.

Cliff Notes to Effective Media Relations: A Summary of 3 Surveys of Editors, Reporters and Journalists [UML] 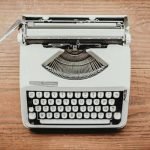 Would You Outsource Your Native Ads?

by Frank Strong Media outlets are hiring writers that are not journalists.  Instead these writers are hired to write advertisements,...