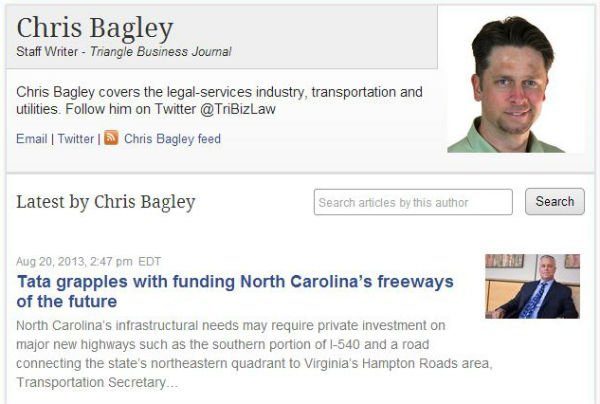 Ask a reporter what’s change in journalism the in the last few years and many of them will mention more stories and less staff.  It’s a similar scoop nearly everywhere as media outlets grapple with the economics of trading print for digital.

Over the last few months, I’ve been fortunate to have gotten to know one (former) journalist, who until recently, reported for the Triangle Business Journal (TBJ) based here in the Raleigh-Durham area.  In August, Chris Bagley (Twitter: @CRBags) left journalism and headed to law school at UNC.

While I’d bet he’s drowning amid the deluge of his first year, he took the time to entertain five questions I posed to him. His thoughts on how journalism has changed, the challenges, and a few suggestions fitting for either an aspiring journalist or PR pro.

1.  In your career, you’ve successfully navigated from journalist, to PR pro, and back to journalist.  Did these respective stints build on each other, did you find them complimentary, or did you view them as completely distinct functions?

“I’m not sure I’d call the PR stint “navigation,” or even “successful.” I took that job because it was part time and I was pursuing an accounting degree at the time.

That said, the experience did inform my career as a journalist. I was doing PR and a couple of other marketing functions for a very small software company that was traded on the Pink Sheets. My employer developed online communities for 1) musicians and entertainers, 2) HOAs and 3) public-safety agencies. I had to get more familiar with the material (our online software) than journalists usually have to do, and the experience really reinforced the fact that there’s no substitute for firsthand knowledge. I remembered that lesson when I went back into journalism in 2011 at TBJ.

I think the editors at TBJ valued the broad and eclectic experience that I brought to the table. There were even a few times in my reporting there when I came across issues surrounding SEC requirements that I might not have understood as well if I hadn’t worked for a publicly traded company. I was certainly more patient with and sympathetic to PR people when they explained why they couldn’t answer certain questions, and I think this helped my relationships with them and ultimately helped me get more information from them.”

2.  How has the job of journalism changed in the last five or so years? For example, you once explained you had a requirement for shorter, but more stories in recent years. Is there a judgment call you’d make on this trend — in terms of good or bad for the profession?

“In just two years, I went from writing 12-13 stories a week to about 20. The stories did indeed get shorter, as you might imagine, because there were always two or three more waiting to be written.

News organizations ultimately have to serve their customers (readers) just like any business. We try to include as information as we think our readers want to know, and as much as we think will hold their attention before they put down the paper or click onto somebody else’s website. Whether the story is long or short, though, I’m going to keep a reader’s attention if I write engagingly and explain how the information is relevant to him. That hasn’t changed.

But there’s no doubt that readers’ attention spans are shorter than they were even 10 years ago. It’s a worrying trend, and you could say it’s “bad” for the profession, and/or bad for readers and/or bad for society.”

3. What’s the most difficult thing you’ve ever had to do as a journalist?

“I don’t think I can give you a single great answer, but I’ll give you three good ones.

Leaving the profession was one of the most difficult things because I believe so deeply in the idea of open information and because I enjoy learning and teaching so much. For probably five years now, I’ve thought more and more that leaving was probably in my best interest, but it was really hard to take that step.

Putting down a hot, interesting story to work on something piddly and obligatory was always hard to do. I spent most of August 2007 tracking down a series of about 70 home purchases that were brokered by the same real estate agent and all went into foreclosure. I worked until 10 p.m. several nights, and the story turned out really well, but on one of those nights I overlooked the story I was supposed to write up for the following day, and my editor was furious.

Finally, I think a lot of us journalists have a hard time putting down our profession at the end of the day. I often look back on a first date and realize that I probably came off as grilling her with questions instead of just having a conversation. This is an issue even now, in law school. I’m always in the back of torts class with my hand up. My professor even teased me about it this – albeit good-naturedly – in front of 80 other students yesterday. After class, he told me ‘Mr. Bagley, you always seem to be asking the question that I’m just about to answer anyway.'”

4. Recently you decided to return to law school, a rather radical shift of careers given the time you have invested in journalism.  What drove this decision?

“I’ve gotten more and more argumentative over the last five years, and I figured this would be a good way to make some money off of it. I’ve also noticed that I often refer to past precedent when making my arguments, which is basically what attorneys and judges do.”

See these related interviews:
The Blurry Edges of PR; Off Script #11: Kevin Hartman of LTPR
Sales Beware the Buyer’s System; Josh Pitchford in Off Script #10
Off Script #7:  Lou Hoffman on PR and Storytelling

5. What advice would you have for a college student considering pursuing journalism as a career?

“Network relentlessly. This will make you a better journalist and also prepare you for your next career if you move on to something different. Share information with individual sources sometimes, at least to the extent that it’s ethical and doesn’t undermine your own news organization. It will pay off because they’ll end up giving you scoops that other journalists don’t get. It will also get you thinking more like them, which will make your public reporting more relevant to them. You’ll end up being part of the conversation instead of some kind of voice from an ivory tower.

And don’t put all your eggs in the journalism basket. Don’t major in journalism, and always have a Plan B for your career, at every stage. I’d suggest majoring in economics or engineering or something more dependable. Consider journalism as a minor, and write for the school newspaper.”

Wish you lots of luck in law school Chris, and look forward to seeing where you land on the tail end. Given how small this little region is, it’s probable our paths will cross again. And if a little idea we have brewing back at the office – for a good cause – gets any legs that path crossing just might be sooner rather than later…

Future of Social Media Marketing is a Path Paved in Payment

Successful social media marketing, if not now, then in the near future will require an investment. Marketers are going to...