5 Takeaways from a Study on Social Media Sales

If you are influenced by social media to make purchases, please raise your hand!

Some 40% of social media users have made purchases online, or in stores after interacting with content on social networks. This according to a study by the Vancouver-headquartered Vision Critical titled: How Social Media Drives Your Customers’ Purchasing Decisions.

Vision Critical itself sells market research solutions and they used their own panels to interview about 6,000 people in the U.S., U.K. and Canada, over the course of roughly a year and a half.  The study looks at just three social networks in Pinterest, Facebook and Twitter, so it’s a narrow scope across networks, but it takes a fairly deep look at these networks.

The study has been on my reading list for several months and I’m glad I kept the link.  Here are five takeaways that jumped out at me:

1. Men make more social purchases.  There are more women on social media, but men make more purchases. Pinterest users for example are 83% female as are 57% of Facebook users. Twitter was stand out as a male-heavy platform, where 54% of users are men. However, overall men are more susceptible to the influence of social media in making a purchase. Fifty-six percent of social-related purchases are made by men.

3. Facebook: active and influential. An astonishing 75% of Facebook users log in daily according to this study.  Further,  the study says “Facebook is more likely to drive a purchase” with in early 1 in 3 social media users making a purchase after sharing, liking or commenting on a post. More dramatically, 29% of these social buyers make that purchase within 24 hours. 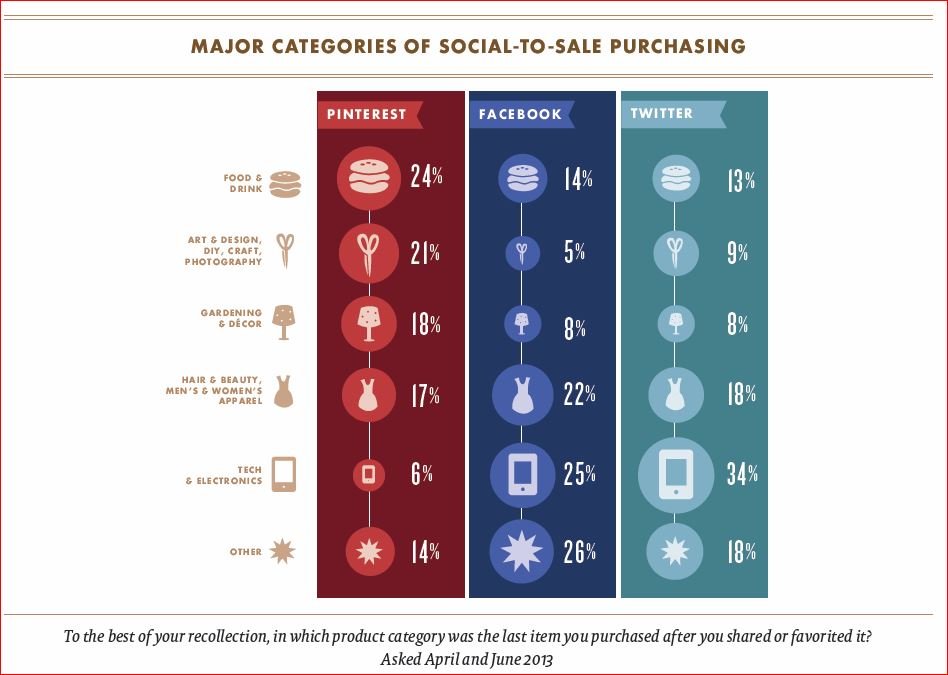 4. Social turns vague intent into sales. Ever had a vague notion about purchasing a product for a while, and then finally make the decision after seeing friend recommend the product on Facebook? Then you are in the majority (for social purchasers). Sixty percent of Facebook users who made a social purchase said, “Yes, I was vaguely thinking about purchasing this product.” The number is higher – 70% for Twitter users – and lower for Pinterest with 49%.

5. There’s a lot of lurking. Everyone knows why “just the tip of the iceberg” is a powerful analogy (or cliché):  because some 70% of an iceberg is hidden below the surface.  There’s a lot of users like this on social media – users this study calls “lurkers.” The study says 14 of every 20 Twitter users are lurkers and tweet less than 5 times per week.  Some 65% of Facebook users also fall into this category – but of this group almost half log in daily! People log into Facebook and simply watch and listen.

I’d close with a word of caution to marketers that want to rush out and blast social networks with ads and status updates in an effort to drive sales: users visit social media for very different reasons than they visit, for example, Google.

We visit Google we are literally searching for answers, but when visit Facebook to see “what’s up?”  It is when that “what’s up” includes a ringing endorsement from a trusted contact that social leads to sales, at least in the context of this study.  I’m here to tell you, that influence, in isolation, cannot be purchased.

Delta: How the World’s Worst Brand can also Be the Best

by Frank Strong The first thing I remember reading last Thursday morning was a passing headline about the most –...