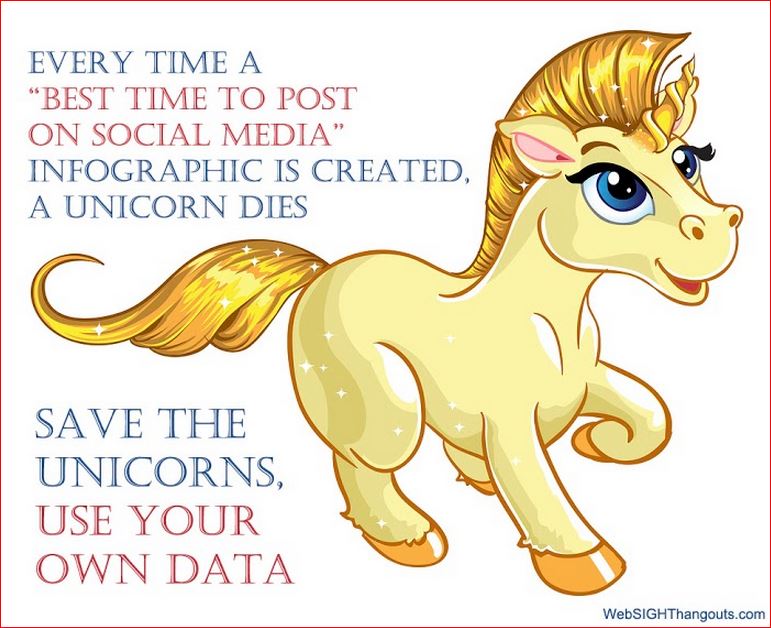 Every time a “best time to post on social media” infographic is created a unicorn dies.

This post is something of a rant, but it’s also a bit of humor. Well, an attempt at humor, because generally, I’m perhaps far too serious to ever endeavor to be funny. Besides, can one have fun and rant at the same time?

The driver for this post is a two-fold combination.  First the nearby meme by WebSIGHT Hangouts that says every time a “best time to post on social media” infographic is created a unicorn dies. The second part is the growth phase that we are going through with Google+ and the “sharing of posts.”

Every time one user “shares a post” it triggers an alert that tells the other user that, well someone shared a post.  When I see these, I think oh, great, someone want to speak with me, then I click on the alert, look at the post, and realize, I’m just one of dozens, or perhaps hundreds, of people that post has been shared with.

In other words, it’s spammy.  It’s interruptive.  It’s rude.  Imagine getting up from your desk during the day, walking over to a colleague and demanding the immediately stop what they are doing to:

Okay, maybe the last one is worth the interruption, but the rest?  It’s just rude.  It makes me want to kill unicorns.

And with an essential apology to Copyblogger’s Brian Clark, I swear I once heard a podcast with him about the word “essential” in a headline, here are 9 essential reasons to kill a social media unicorn:

1. Direct messages. After following someone on Twitter you get a direct message saying thanks and inviting you to connect on Facebook and LinkedIn too.

4. Sales hound. After connecting with someone you met in real life on LinkedIn, they proceed to bombard you with sales solicitations.

5. Viral video advice. About 18 months after posting a video to your company’s YouTube channel that performed especially well, a video expert with no profile photo and no videos posted contacts you about helping you get it right the next time.

6. Pinterest for men…coming soon. You’re a man trying to experiment with Pinterest and despite following all sorts of manly boards about special forces and mixed-martial arts, you stream is still filled with three types of posts a) hair products b) jewelry and c) cats.  Lots of cats.  What was that? Yes, dear, I love cats too.

7. Spammy blog comments. After being notified you got comment on your blog, you log in only to see the comment is from a user named “Property management” and the comment reads, “Hello, I love reading through your blog, I wanted to leave a little comment to support you and wish you a good continuation.” Of course there’s a spammy link too.

8.  The newly social CEO. You’ve been putting out social media fires for two years, and because there’s no management support for it, you’ve been doing on the back channel and make things right with the customers. Suddenly, one day, your CEO decides he’s “social” and spots a negative tweet the morning after you already solved the problem, he emails you a link to the tweet asking what we should do about it.

9.  The G+ direct sharer. Someone shared a post on Google+ with you directly. It amazes me how many people do this.

There’s no right or wrong way to do social media — what works for one organization or person, may not work for another.  But sharing directly? Gosh that’s so rude.  It makes me want to kill a unicorn.

A Better Expression of Outrage is Silence

by Frank Strong The fashionable marketing strategy for apparel makers is apparently, being insensitive. Kenneth Cole of course is the...