The First Tweets from 26 PR Influencers 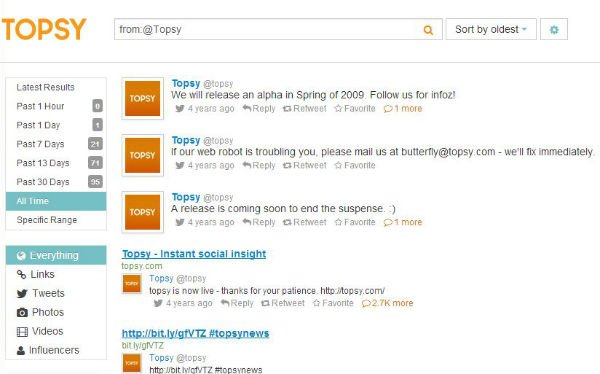 What is said on Twitter, stays on Twitter, and if Topsy has anything to do with it, that might be forever. The social media tool recently announced it will allow us to search tweets as far back as 2006.

Brian Patterson, an SEO, had the ingenious idea of searching it for the first tweets by SEO influencers. And after having some fun by retweeting the first posts by Andy Beal, Barry Schwartz and Copyblogger, I thought I’d copy that idea for PR influencers.

These influencers come from this Twitter list which I curate for the purposes of producing this PR Thought Leaders Daily on Paper.li.  While I have created this Paper.li for me, it is an amazingly good summary of what’s was chattable among the PR elite on Twitter each day. The power is in taking good care of the Twitter lists.

This list is a completely subjective list that I have arbitrarily selected. None of the names here should be a surprise, but if you feel left out, please don’t. The names are listed merely in the order in which I did the searches; there is no order of merit here. If you don’t like the list, feel free to make your own.

One other caveat:  the Topsy search I found, is not perfect.  There are a couple tweets it displayed as the “first tweet” that I suspect are not. There are some, such as my own first Twitter post, which do not appear to be searchable.  Even so, it’s fun to see what some of these folks had to say on Twitter, 4, 5, 6, and even 7 years ago.

I’ve just set up an account on Twitter. I know I’m late to the dance, but I couldn’t stand on the sidelines any longer. — Greg Jarboe (@gregjarboe) January 28, 2009

I am reading lecture notes for an Advanced Public Relations course I am currently taking through Media Bistro.com. — RochelleVeturisColes (@RochelleVeturis) June 7, 2008

Hey, what are you doing?

Just accepted Sabrina’s invite to join Twitter, but see she hasn’t tweeted for a while

putting my money where my big mouth is and playing with twitter — Kevin Dugan (@prblog) April 1, 2007

Lunch at Smith & Wolllensky in DC

Stting in a session at NewComm Forum. Just decided I had to give this a try.

getting ready for lunch

It’s either allergies…or a cold…or an excuse to catch up.

by Frank Strong This post is something of a rant, but it’s also a bit of humor. Well, an attempt...