Who would have known a candy bar could make such headlines? After all, when was the last time chocolate earned this level of media? I’d suggest I was chocolate covered grasshoppers – and that was a PR stunt too. Before that, it was E.T. and Reese’s Pieces.

By way of quick background for those that might have missed it, Google decided to name its newest version of its Android operating system, that’s the stuff inside smartphones like the Nexus 7, after a candy bar. In this case, KitKat was the lucky brand.

It’s been all over the news, with editors and producers everywhere writing sugar-coated headlines that play off old marketing taglines. “Break me off a piece of that,” begins ABC – while CNN writes “Android sweetened by KitKat.”

It’s just too sweet to pass up. Note to self: editorial loves chocolate.

Some pubs didn’t follow the mainstream, like Fox News. For example, when I used Fox News’ own search box, it appeared to me that Fox had ignored the story completely. There were no search results relevant to the Google KitKat Android story at all.

How in the world is that fair and balanced?

Then I searched this site called Google for “Fox News and KitKat” and found this link (which was the first search result in response to my query). If you look closely, the link belongs to Fox News, but the story is actually by the Associated Press.

Maybe Fox didn’t cover it after all. You can bet their affiliates will. Hang in there Google, sometimes affiliate stories go national.

Given I was once a parochial school boy that dutifully rode my used Huffy bike door-to-door hocking candy bars for Catholic charity…I was struck by how nonchalant the publication was with its headline on this story. A cool 50 million? I had to ride 20 miles (uphill both ways) to rid a box of 24 and it was a bonus if I sold more candy bars than I ate along the way. 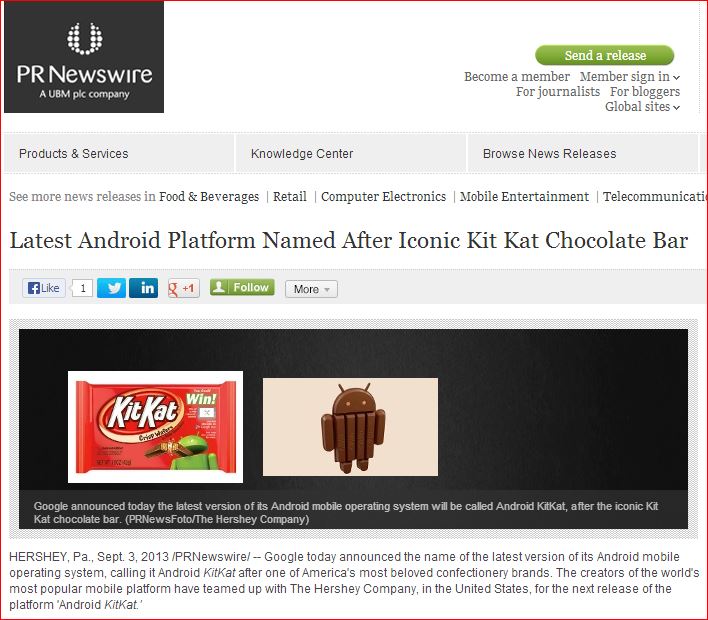 Both Hershey and Nestle issued press releases over PRNewswire. Did they use “no-follow” links?

Did the Press Release Have No-Follow Links?

All in all, there are some 120,000 posts in Google News for KitKat alone today, just about 36 hours or so after Hershey’s made the announcement with a press release. That Hershey’s press release was published on PRNewswire.

I bet 100 SEOs checked out that release for no-follow links. Sadly I was checking out the social shares…it has just one solitary Facebook “like” at the time of this writing. The “like” isn’t mine, but I did give it a tweet. And yes, for those naysayers, KitKat does have a Google+ page.

PRNewser’s Patrick Coffee was quick to forecast what would inevitably occur as the story widened, “Google Gave Kit Kat the World’s Best Free Marketing Campaign.” He also pointed out, near the end of his piece, that “Kit Kat is only marketed by Hershey within the U.S.” and that “competitor Nestle owns the licensing rights everywhere else in the world.”

This, of course, explains why Nestle also published a release on PRNewswire, which has no likes, and maybe a couple SEOs reviewed. It also explains why Marketplace’s Sarah Gardner reported that Google cold-called Nestle, rather than Hershey, to get things cooking when the naming idea was born.

“That’s partly why Google went with KitKat. It’s a favorite late-night snack among the 20-somethings who toil at the company. At first, Android executives didn’t even know who owned the candy bar. They found out and ended up cold-calling Nestle to see if the Swiss firm would be interested. Two days later, they had a hush-hush international deal.”

It’s interesting because the campaign’s landing page is on Google’s Android site, but if you click “to see if you’ve won” a new phone, the call to action takes you to a Hershey’s site. I checked Nestle’s site and they’ve got a splash on their home page that leads to this post which pointedly reads, “Google and Nestlé announce Android KitKat.” 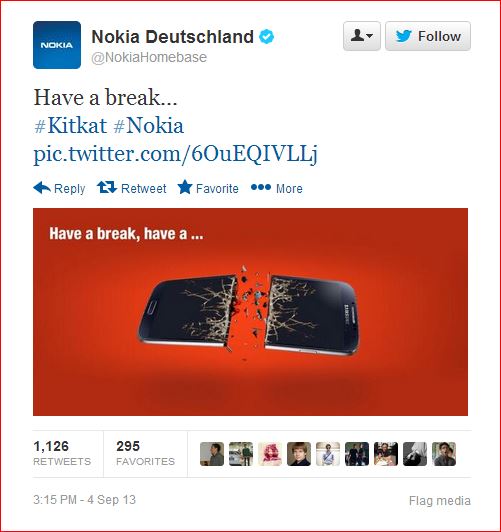 The “newsjacking” has already begun.

The hard news cycle has run its course and the newsjacking has already started. The Verge reporting that Nokia issued Samsung, “a KitKat death threat on Twitter.”

Give me a break! Who’s doing the newsjacking here? The brand or the reporter?

The analysis pieces are coming too and these will be both good and bad. In other words, brace yourselves folks, the health nuts are writing indictments of Google as we speak.

Why? Because this PR stunt is obviously contributing to the obesity problem in America. Really? A robotic candy bar? Has America not watched Wall-E and what happens when obesity meets robotics? And now we’re adding in chocolate?

At least this Scottish fellow gets his biases out up front! “I used to think Google was the greatest thing since sliced bread.” Clever prose, my friend, clever. Do you want some candy?

It’s a milk chocolate question, but perhaps it ought to a million dollar question too.

This was clearly a well synchronized, multinational, big company effort that must have taken a lot of hard work to get done. The only thing they didn’t think about – was making the press release out of chocolate too.

There’s no doubt this going to make the lists of creative PR ideas – and hit the “biggest news” stories of 2013 in a few months. I bet there’s a play for Halloween coming too. And remind me again, when the Google Zeitgeist comes out next?

5 Takeaways from a Study on Social Media Sales

by Frank Strong Some 40% of social media users have made purchases online, or in stores after interacting with content...