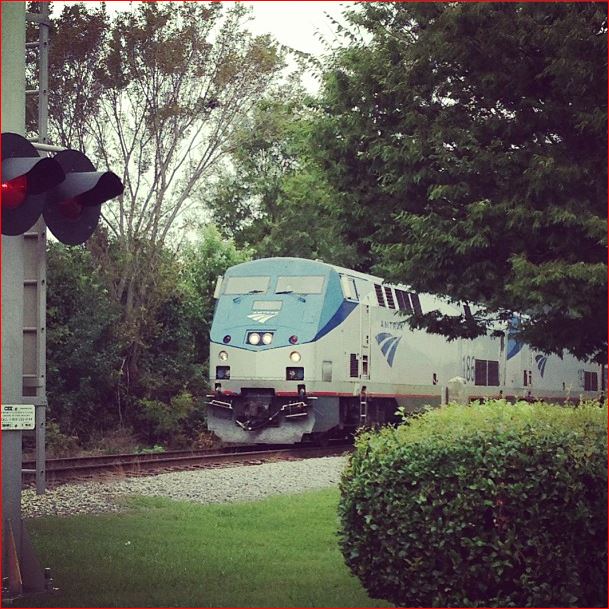 Not only did I stop for this train during one commute this week, it stopped for me…blocking the road. The culmination of a commute one day that was so bad it was comical.

Is it Saturday morning or Sunday morning? Doesn’t matter…I got some great links below.  The second suggestion is a bit long, but sooo worth it.  Read that post, please, it’s very informative. And put your coffee down for the third one, otherwise you’ll wind up spitting it out while reading!

1. Selling love objects.  This is a hidden emotional need – and it’s well grounded in theory.  It has nothing to do with Adam or Eve, rather this is about positioning a product so that it’s associated with parental pride, for example. In this guest post on Spin Sucks, titled, The Shoulders of Giants: Three Essential Communications Theories, I’ve boiled down about 60 pages from peer-reviewed journals into a single blog post. It’s a guest post.  And Google, if you’re listening, I didn’t add the one link to my own blog in that post, the editor did, because she felt it was relevant (thank you Lindsay).  She also linked out to a whole bunch of other sites – which is a practice I find useful and leads me to the next post on this reading list.

2. Link Out to Any Damn Website You Please.  This post is money!  Two prominent SEO gurus I follow shared this piece and it bubbled up in my Google+ stream.  It’s so juicy, I read it twice:  What To Do When Using External Links.

First this sucked me in:

I watch all of Matt Cutts’ videos. I have never once seen him say, “Google doesn’t want you to link to other Websites”. Quite the contrary, he says that Google encourages people to link out to each other.

And nowhere did Matt or any other Googler I follow say you have to throw a “rel=’nofollow’” attribute on the outbound links you choose to give to other Websites.

All they ask is that you use “rel=’nofollow’” for your marketing links. They don’t say “marketing links” but that’s really what they are talking about.

Then later Martinez drives it home:

Marketing links can be good or bad but in general the vast majority of links obtained or placed or given by anyone with any smidgen of “SEO knowledge” are bad marketing links.

He also mentions that Twitter was passing PageRank, “up until a few months ago.” I’m not an SEO but I’m definitely in the “didn’t even know” club.  Now I do.  The irony of his comment is that I was thinking about just that as I read the post – all these social sites are link out sites – and then whamo, he answers the question.

Another question I’ve been wondering about is my Tumblr site. It’s my new Posterous site and I post infrequently there, but I do like to link back to things I’ve posted here. In my opinion, these links are relevant. Even so, I’ve been wondering lately, would Google frown on this?  Worse would it punish me?

We can fuss about when a group of Websites becomes a link farm or we can be realistic and say, “Google sees closely-related Websites linking to each other all the time, by the millions, and it doesn’t care.” And that’s true.

It’s almost trite now when we say every link on a page should be there for the user but that’s a pretty good rule of thumb. Always assume that some real person is going to find your Website and click on the links. They won’t care if the links lead to your sites or someone else’s as long as you don’t trick them.

And if the users don’t care the search engines have no reason to care.

Thanks for clearing that up. I’m now a former bozo, but still not an SEO, thank you.

3.  23 Most Unfortunate Advertising Placements.  Ed Fry posted this to Inbound, another reason you should be on that site:  great content. In any case, it cannot be described.  You’ll have to view it for yourself.  If is the morning and you are drinking coffee, I strongly suggest you put the cup down or you will choke.

4. Buy promoted Tweets, save ad money. Neat little case study on Shift Communications’’ blog: How Promoted Tweets Reduced Advertising Costs By 88%.  The agency bought a promoted tweet plugging a webinar.  Eighty-one people clicked on the link, or about .62 cents per click, which is way cheaper than AdWords. It gets better:  8.6% of those clicks converted into webinar registrants, of which one became a paying client. Pretty sweet deal for $50 in spend.  I’m a huge proponent of using paid (social) media for earned media’s sake. It’s cheap.  It’s targeted.  It’s effective.  All said…I really don’t mind if other PR pros turn their noses up at the idea.

5. Content Marketing: Today’s Little Black Dress for Companies. This post primarily looks at the psychology of a buyer – like the first post on this reading list – it’s about marketing to hidden needs, but then goes a step further to examine the stages of a buying cycle.  Content marketing needs to produce content that appeals to each state – from emotion to rationalization.

Today, content marketing is a necessity for most companies. Most people turn to the Internet to research a company or product. They expect to find information—or they turn elsewhere.

How about you?  Any good reads this week?

Years ago I had a mentor that was ruthless about meetings and time.  The deal was this:  If you want...